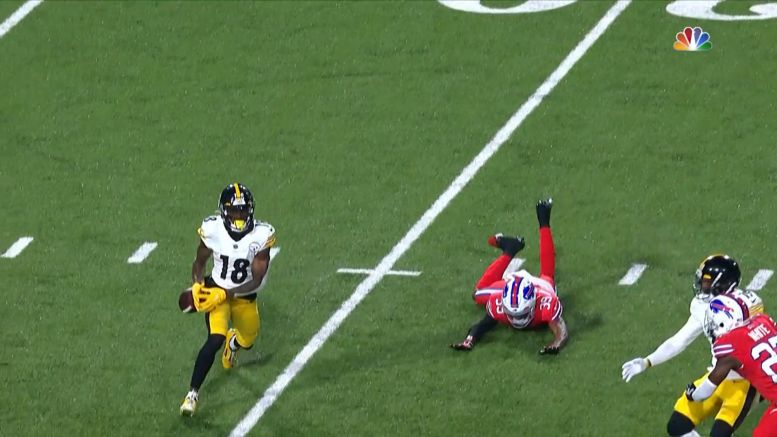 Following two games in which the Pittsburgh Steelers saw their pass-catchers drop half a dozen passes or more, with many of them coming from second-year wide receive Diontae Johnson, they opened the game by watching their skill players drop two passes on the opening two drives—both by Johnson, who put the first play of the game on the ground.

We have clearly reached the point at which we are beyond a physical, technical, or mechanical issue, and have arrived at a mental issue with Johnson, as the drops are in his head. Last week, when asked what he can do to address receivers who are dropping the ball, head coach Mike Tomlin said that they can get the ball or get replaced.

And as he has over the course of the past several weeks in the limited opportunities that he has gotten, not only to get on the field, but also to receive targets, the third-year wide receiver made the most of them, as Washington caught a touchdown pass from Roethlisberger in the middle of the second quarter for the first point of the game.

It was his second touchdown in as many weeks, and his fifth of the season, which is now more than he had in his first two seasons combined. He caught his fifth touchdown pass on just his 26th reception of the season.

That is also the same number of touchdowns that Johnson has on the year, with 66 receptions, which is by far the second-most on the team behind only JuJu Smith-Schuster. But when you are dropping somewhere around 15 percent of the catchable passes that come your way, then you have to take a seat.

And that is what Tomlin did. Leading up to the game, a lot of people scoffed at Tomlin’s remark, basically refusing to believe that he would actually put Johnson on the bench if he continued to drop the ball, but that’s exactly what he did, for the entirety of the remainder of the first half.

Though he didn’t field a pass on their first couple of drives, Roethlisberger did come back to him on a bubble screen to start a drive at the end of the third quarter for five yards. And then again, for the same play on the other side of the field, two plays later.

Roethlisberger found him again on a quick slant for a nice game that got the Steelers back into the red zone, his third catch of the drive, which led to a touchdown to Smith-Schuster. He would finish the game with four catches for 40 yards, three of them coming on that one drive. We’ll see what next week holds for him.