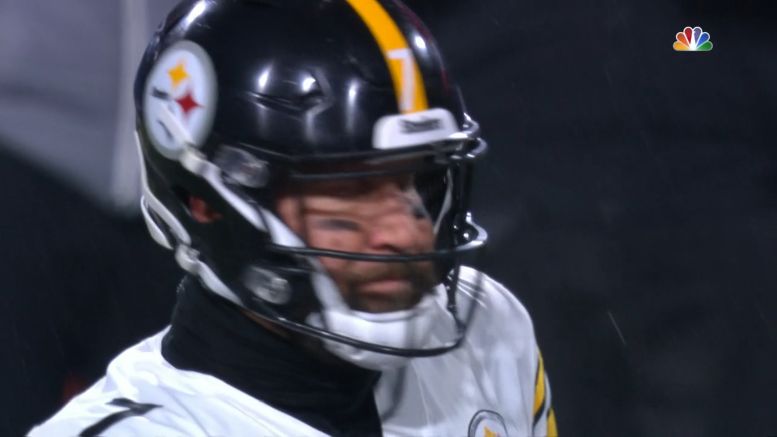 The Pittsburgh Steelers entered Sunday night’s game seventh in the NFL in scoring, averaging 27.8 points per game, which is extremely respectable even after being held to just 17 points in each of the past two games.

The Buffalo Bills entered the game also averaging 27.8 points per game, though ranked ninth. The Steelers had scored 334 points on the season, the Bills 333. The point is, these are two teams that have been able to put points on the board.

By the looks of it in the first half, you wouldn’t think so. Granted, the slightly snowy weather was no doubt at least a partial factor, but both of these offenses looked awful, especially early on, with both Ben Roethlisberger and Josh Allen completing under 50 percent of their passes.

Both quarterbacks were the victim of some drops, perhaps five or six combined for the pair of them, but that only accounts for a portion of the problems. The Steelers put up 143 total net yards in the first half, converting just once on seven third-down opportunities. The Bills had just 102 net yards, going two for seven on third down.

And the only two touchdowns of the half were set up by takeaways. The Steelers recovered a fumble—or an interception, depending on how it ends up being interpreted—to get set up on the Bills’ 30-yard line, Ben Roethlisberger ultimately finding James Washington for a score.

Unfortunately, he would also end the half finding the Bills’ Taron Johnson for a score as well, a pick six, Roethlisberger’s eighth interception of the season, but his first returned for a touchdown. It is the first non-offensive touchdown the Steelers have allowed this season.

The Bills were the first to respond, opening the second half with a very good drive led by Stefon Diggs, who caught several passes on the opening drive, including the eventual touchdown, which put Buffalo up by two scores.

The Steelers? Not so much. The second half began much as did the first. They did show some life on one touchdown drive, with Roethlisberger throwing the ball around, and Diontae Johnson getting back in the game and making some catches, ending in a JuJu Smith-Schuster touchdown.

But trading points wasn’t enough, and when they slipped back down to a two-score deficit, Roethlisberger was intercepted looking for James Washington deep, which was effectively the death knell, sending the Steelers out of the stadium with a loss, and now with a two-game losing streak. Largely, because the offense couldn’t muster much at all.