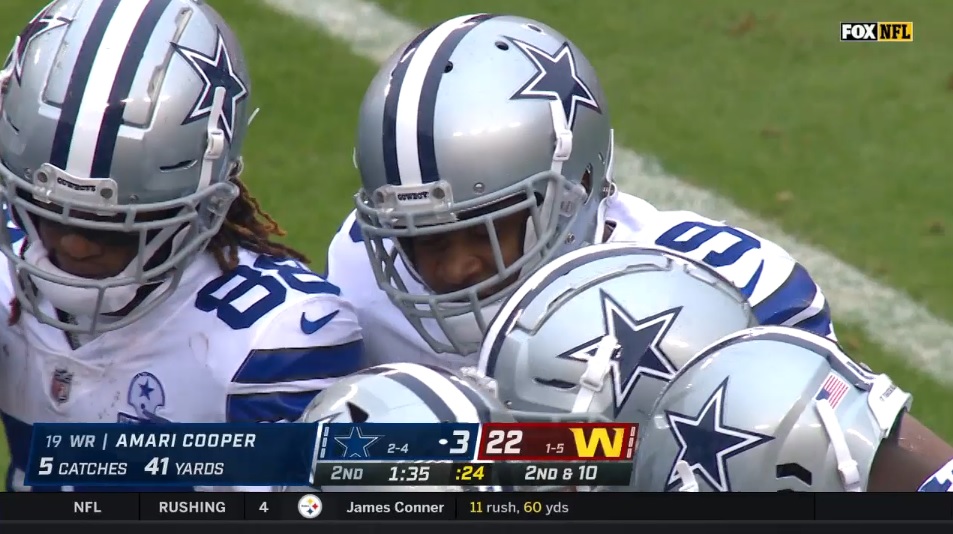 Here’s our analysis of the Dallas Cowboys’ offense.

The area they’ll be focusing on while playing “revolving QBs” since Dak Prescott’s injury. That means a heavy dose of Zeke Elliott. Like the rest of the offense, he’s struggling to get much going with how beat up this offensive line is. Elliott’s averaging a career low 3.9 YPC and struggling with explosive plays. He’s also struggling to take care of the football. Already has five fumbles. That’s more than all of 2019 when he coughed it up three times. Backup Tony Pollard has shown a little more juice but overall, not having any more success, also averaging 3.9 YPC with a “long” of 14 yards on 38 carries. Rookie WR CeeDee Lamb has five carries for 33 yards. As an offense, they’re slightly below average with 21 runs of 10+ yards, ranking 18th in the league. Being one of a handful of teams yet to have a bye week is helping them. But over the last three weeks, they have just one such run, second-to-last across the league.

Schematically, it’s a mix of inside zone and duo. They’ve used more Wildcat packages with Prescott out and most of those runs are Duo, a double-team, man-blocking scheme.

Their Wildcat package got a little more interesting in last week’s SNF game against the Philadelphia Eagles, having Elliott and WR Cedrick Wilson Jr. (son of the former Steelers’ wide receiver and yes, that means you’re old) each seeing time as the Wildcat QB. For Wilson Jr., they ran read option.

They will also run toss plays to the field and boundary side to try and get Elliott into some space.

Some other offensive stats. Overall stats are tough to use because of how much this offense has tanked without Prescott. Example. They’re averaging 23.4 points per game this season. Not a great number, that’s 24th in the league, but it’s much worse post-Prescott. In the three full games without him, they’ve scored one touchdown and averaged 7.3 points. Outputs of ten, three, and nine points. Yikes. They’ve struggled on third down (25th, 39.8%) and in the red zone (24th, 56%) throughout the season.

Led by starting quarterback…we don’t know. Not as of this writing anyway. We know who it won’t be. It won’t be Andy Dalton, placed on the COVID list. It won’t be Ben DiNucci, 7th round rookie who took his lumps in last week’s loss to the Eagles. Starting Sunday afternoon will be either Garrett Gilbert or Cooper Rush, splitting reps this week. Which is particularly difficult because neither have been on the roster long. Gilbert for about a month, Rush for about a week.

Combined, those two have thrown nine combined passes in zero starts with zero touchdowns and zero picks. They’ve been in the league longer than DiNiucci, and Gilbert has played professionally in the AAF, but there’s not much Sunday experience here.

The receivers do look better. A strong top three with Amari Cooper, CeeDee Lamb, and Michael Gallup. Cooper has been among the most productive receivers in football. His 77 targets are tied for second most in football while his 54 receptions are tied for third. His production though tanked last week with DiNucci under center (one catch for five yards). Similar to Chase Claypool, Lamb has been an excellent rookie and very productive. Gallup has taken a backseat but still working as a deep threat, averaging 16.6 yards per catch. Zeke Elliott has been an oft-targeted checkdown option but done little with it, averaging only 6.5 yards per catch. They’ve completed 29 passes of 20+ yards, which is top five in football, but only three such completions the last three weeks, which is 31st. Drastic difference there.

Like a lot of offenses with struggling/inexperienced but mobile QBs, Dallas has tried to simplify reads and stick with basic install stuff. Boots and sprintouts to give their QB a half-field read, usually hitting something in the flat.

And some mirrored concepts, the same routes run to the same side that again makes for a fairly easy read for the QB if he has to work to his third and fourth progression. Like this smash/seam mirrored to each side.

Watch out for H Texas in the low red zone. Angle route by the RB if he gets outside leverage by the LB. These plays weren’t successful but watch out for it conceptually. Seems to be a favorite of theirs.

Filling in for Josh with the individual scouting report on the Cowboys this week.

Again, it’s hard to figure out the QB situation. The tape on these guys is just limited. Josh seemed impressed by Cooper Rush’s preseason tape during his first stint with the Cowboys. Couple of clips he tweeted out.

Why yes, I'm watching 2017 Cowboys preseason tape. What a nice throw here from Cooper Rush to Rico Gathers for the score. Ball looks effortless coming out of his hand. Great placement. pic.twitter.com/lvPqGJBk7N

He just looks so smooth stepping up in the pocket here to cut this one loose. Cooper Rush oozes confidence on some of these throws. pic.twitter.com/BnermMI0NW

Whoever they face, Gilbert or Rush, neither will be anything remotely near the athlete Lamar Jackson was. Rush and Gilbert tested poorly athletic coming out. Rush ran a 4.93, Gilbert a 4.83 at his Pro Day.

Elliott of course is a talented running back. The fumbles are a worry but he has the blend of size, speed, power, and a decent pass protector. A very-well rounded back, even if he’s having a tough season. Backup RB Tony Pollard is an impressive athlete who had a strong career at Memphis. Here’s part of what I wrote in my scouting report:

“– Superb long speed and home run player
– Excellent burst and acceleration, able to hit the hole as soon as he sees it
– As a running back, shows vision and ability to press and set up linebackers”

What Dallas is going through now is what Pittsburgh went through last season, desperately trying to compensate for the loss of their franchise QB. That includes running a Wildcat offense.

One reason for their woes beyond QB is the rash of injuries they’ve had along the offensive line. Here’s how the o-line looked in the summer before camp.

Here was the Cowboys starting five last week against the Eagles.

Pretty big shakeup. RT Terence Steele has struggled about as much as any tackle in football, a UDFA from Texas Tech overwhelmed by the nuance of the NFL. He was on my losers list post-Senior Bowl. John Owning, who covers the Cowboys, has noted his struggles after getting tossed into the starting lineup.

I'm actually optimistic that Terence Steele can develop into something down the line, but he was a complete liability – both in pass protection and as a run blocker – against CLE. Shouldn't have been out there. #Cowboys pic.twitter.com/8gXbyhRn8h

He’s someone TJ Watt should whip on this weekend and the Cowboys have to give Steele help.

Couple notes on their wideouts, Cooper and Lamb. Cooper is an all-around receiver with great size and YAC ability. Turns a short slant into a 16 yard gain against Cleveland.

Lamb has benefitted from soft zone coverages, making plays between the numbers, but he’s an impressive route runner whose showing nuance in his routes. Top slot in this clip. Watch him shake the CB.

Was there a push at the top? Yup? Is that what good WRs get away with? You bet.