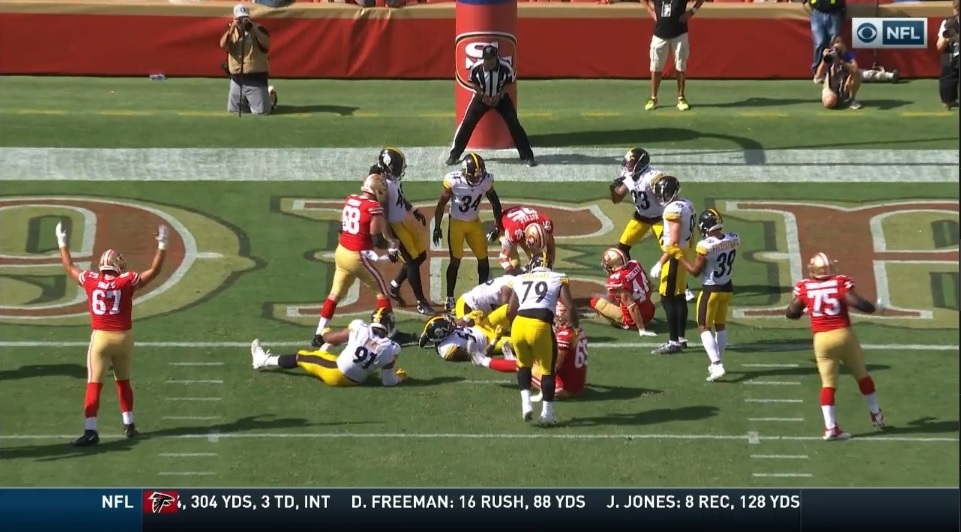 Wow. What a week. The Pittsburgh Steelers made a lot of moves during the week. Ben Roethlisberger, the Steelers franchise quarterback since 2004 is out for the season. Enter young Mason Rudolph as the first starting quarterback in 15 seasons (other than about 25 regular season games when Ben was hurt or suspended). Rudolph has big shoes to fill.

Kevin Colbert also made another big move. This one more voluntary but very uncharacteristic. The Steelers traded a 1st round draft choice as part of a deal to acquire safety Minkah Fitzpatrick from the Miami Dolphins. The move made more sense when the Steelers placed Sean Davis on injured reserve with a torn labrum.

The Steelers are not a team that plans to tank a season away. Since 1969, the mantra has been “we reload rather than rebuild”. Lesser organizations blow up a squad and start over; the expectation is that the Steelers will rebound quickly to compete for the playoffs. The goal every year is to win a Super Bowl, not to see how high they will pick in the NFL draft.

Steelers Depot gives us specific things we should look for during the game. I always read these articles prior to kickoff:

Matthew Marczi described what we should watch for in the game against the San Francisco 49ers. Naturally, Marcus Rudolph and his rapport with the receiving corps is a factor. The defense must step up to help the new starting quarterback. And then, there is Minkah Fitzpatrick. Does Keith Butler integrate him into a defense so that his talent can make a difference.

Alex Kozora forecast what would happen in his Steelers versus 49ers prediction.  Alex foresaw the Steelers winning if a # 2 receiver emerged to support JuJu Smith-Schuster. The defense would also need to avoid biting on play action. Finally, Marcus Rudolph needed “some rope” to throw the ball deep. Alex warned, “Playing with too much caution isn’t how you turn a season around.” Conversely, a loss was certain if the Steelers didn’t use motion to sniff out the 49ers defense, the front seven failed to control the run, and fail to move TJ Watt around to exploit matchups. Alex predicted the 49ers winning 30-17. Unfortunately, he proved to be correct and if you look at some of his opinions, you can see why.

Tom Mead gives us a matchup to watch during the game. This week it is “trying to contain George Kittle.” Kittle ended up catching 6 passes for 57 yards.

Dave Bryan identified the keys to a Steelers victory. Dave centered several keys around Mason Rudolph. Steelers inserting Run-Pass-Option plays for Mason Rudolph and taking some deep shots. Also, some play-action. The 49ers already use play action so the defense must read its keys well to defend against it. The defense must also limit the explosive plays of 20-yards or more. They have given up 12 in the first two games. Devin Bush & Mark Barron need to shut down their run game. Dave’s final key is the Steelers being plus two in the turnover battle. The Steelers did slightly better limit the 49ers to 5 explosive plays.

The defense gave the ball to Pittsburgh’s offense four times in the first half. The net result was 6 points, gaining only 37 yards in four drives. Tunch Ilkin and Craig Wolfley of SNR mentioned several times their confusion that Rudolph played exclusively in the shotgun formation. They had expected him to get more snaps under center to use play action and/or run-pass-option plays. The 49ers seemed to determine to shutdown the run and force Rudolph to win the game with his arm.

We had to wait until the final drive of the half for the offense to make more than one 1st down in a drive. Unfortunately, the 49ers sacked Rudolph on a 3rd and 4 play at the San Francisco 36 pushing them out of scoring range. Instead of closing out the half by extending the score, the Steelers punted the ball.

Clearly, the Steelers were in trouble despite finishing the half with a slight 6-3 lead.

The Steelers opening drive was just more of the ineptitude demonstrated in the first half. After an initial first down, Alejandro Villanueva held to make a 1st & 15. Rudolph tried to find JuJu, but K’Waun Williams intercepted the ball instead. The 49ers offense knew what to do with a turnover. They quickly turned it into seven points and their first lead of the game.

The offense got the ball back and produced a three and out. On the third drive of the half, JuJu caught the ball on the run and scored on a 76-yard catch and run. The 49ers score again and with the ball back James Washington gains 6 of the 7 needed yards for a first down in Pittsburgh territory. Down 17-13, James Conner finally gets a decent run for 10 yards. Rudolph targeted his college teammate Kames Washington deep. The referees penalize Jason Verrett for pass interference and the Steelers find themselves in 49ers territory. Whomever made the decision to target Verrett again was smart. Diontae Johnson scored on a 30-yard pass play.

But after showing a flash of what this offense could be, it let the team down. The defense prevented a score with their fifth turnover but James Conner then fumbled the ball away. The 49ers then score their 2nd touchdown off a Steeler turnover. The Steelers offense gets one more shot but following a sack, Rudolph is unable to convert on a 4th and 12 play.

The defense was hot to open the game. San Francisco’s first five drives ended this way; interception, punt, interception, fumble lost, fumble lost. Minkah intercepting his first pass in a Steelers uniform showed why the Steelers spent a first-round draft pick on him. T.J. Watt’s interception on the opening drive was equally satisfying. The 49ers got as close as the 7-yard line, but Devin Bush recovered a bad snap. Stephon Tuitt asserted himself sacking Jimmy Garoppolo. It had to be deflating to be only leading 6-0 after such a start. The 49ers then made it to the 6-yard line but settled for a field goal on 4th down. The 6-3 score would remain until the half ended.

The defense did not get much time to relax at the start of the second half. The Steelers offense had the ball for 1:41 before turning the ball over. San Francisco fed the defense a steady diet of Matt Breida and Raheem Mostert pounding the ball then play action passes. Defenders hit Garoppolo several times but somehow made completions. The defense held the 49ers twice at the goal line but after a shady spot given b the referees gave up a 1-yard run. The defense forced a three and out and then JuJu scored.

Instead of capitalizing, the defense let down and allowed the 49ers to march 75 yards for the answering score. Going into the 4th quarter, commentators were already noting the defense looking tired. The 49ers committed some penalties and punted. The Steelers score again but the 49ers go from their own 25-yard line all the way to the 7 and threatening to score. T.J. Watt recovered another bad snap and Pittsburgh had the ball again. The Steelers needed a long scoring drive to ice the game. At this point, I had to leave to go to work so missed James Conner’s lost fumble just 1:20 later. The box score shows the 49ers had the ball at the 24 yard line and took 9 plays and 4:14 to score the winning touchdown.

The key play appears to be Mark Barron called for defensive holding on a 3rd & 11 play from the 14-yard line. A 4-yard run up the middle followed by a Garoppolo pass to Dante Pettis gave San Francisco their final lead and eventual win. The defense played well enough to win; just no help from the offense which lost the time of possession battle 23:43 to 36:17 in favor of the 49ers.

Chris Boswell converted all of his kicks. Jordan Berry averaged 52.3 yards a punt but 5 or 6 were returnable. Richie James averaged 10.6 yards per punt return. Compare to Ryan Switzer’s one punt return for zero yards. The punt team performed an illegal shift that the referees flagged. Other teams consistently outgain Pittsburgh’s kick and punt returners. Johnny Holton did return two kicks for 42 yards.

Pittsburgh averages 4.0 yards per punt return so far this season. Amazingly, that is higher than eight other teams. Yoi.

The GrumpyHighlander noted that, “I’m not gonna give up on Mason but I warned everyone to not get too hyped. He’s gonna have struggles.” Later in the half, “I’m not blaming Rudolph after paying more attention. The WRs are not getting open at all. And he’s getting a lot of pressure.”

DirtDawg1964 likes the newest Steeler. “It’s one game, up but Minkah playing like a first rounder. He’s around the ball a lot. And he hits hard.”

But after four turnovers and just six points, GrumpyHighlander found a solution. “Now all we need is 4 more turnovers and we’re set!!!”

1361 comments in the 2nd half. Although there were some glimpses of hope, a third loss does not make for happy campers.

Nunya looked at the bright side: “I honestly do owe Mike Tomlin a thank you. For years, I took the Steelers games way too seriously, and it would completely destroy my week when we lost. I swear, because I expect absolutely nothing from him, I no longer really let it bother me after the game. That is nice…”

Steven Ledbetter endorsed the trade as did others who liked his comment that, “Steelers wouldn’t get a better player than Minkah in the draft”

SeventhHeavan does not like the Steelers prospects in the near future. “Can you imagine when they play the Ravens? We’ll get crushed. Now that’s a team that is coached well.”

At 0-3, the Steelers chances to make the playoffs are very dim. This season may separate true Steelers fans from the fair-weather variety. It is important to note that complaining about poor coaching decisions and poor player performances does not equate to a fan abandoning their team. The anger and frustration are natural if not helpful. The players are busting their humps and are much more upset than we. The coaches are trying to adjust game plans to match their player’s skills and put them in a position to succeed even if it does not appear so.

In this game, the Steelers defense played well enough to win if the offense did their part. Six points off of five turnovers was not good enough. The 14 points scored on the 49ers two turnovers was the difference in the game.

Luckily, all three of the other AFC North teams lost this weekend. The Steelers face the Bengals and then the Ravens. Both are must wins the way I see it. Here We Go!

I always like to offer a music selection. Here is Sittin’ On the Dock of the Bay by the Otis Redding. I’m adding one more song for those fans that have about had it with the Steelers: Should I Stay or Should I Go by the Clash.