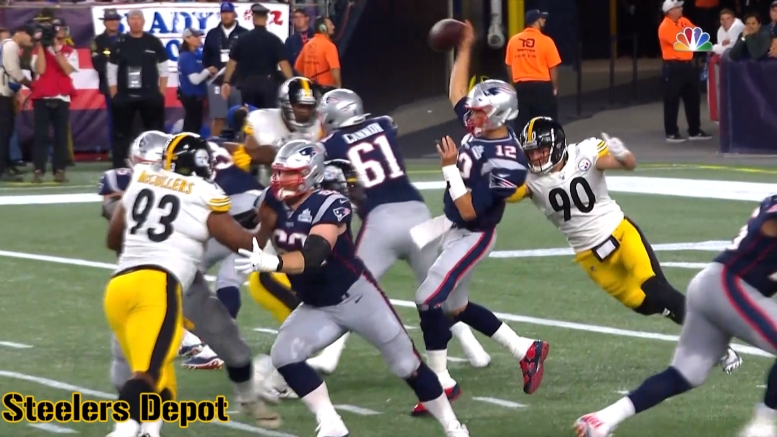 As we’ve done in the past, the keys to the Pittsburgh Steelers winning (or losing) tonight’s game. Three things that need to happen for them to end up on the right side of the score and vice versa in Week 3’s critical game against the San Francisco 49ers.

It’s obvious but nonetheless important. This offense has been spinning its wheels for two weeks now and is without Ben Roethlisberger. Rookie wide receiver Diontae Johnson is our X Factor knowing he’s sent Donte Moncrief to the bench (or more accurately, Moncrief sending himself there), but anyone could be the guy. James Washington is the big play threat this team needs. Maybe Ryan Switzer gets to run a route further than three yards. Or Johnny Holton is the man who cashes in on a big play, as the team’s attempted against New England and Seattle without success. Until that happens and someone else decides to make a big play, this offense will be as exciting as a trip to the DMV.

2. The defense doesn’t bite on playaction.

A lot harder than it sounds. Especially with how well run this 49ers’ offense is run. They have an identity. The Steelers – currently – do not. They use one play to set up another. A jet sweep one play, a fake the next. Inside zone, inside zone, and then wham, playaction, deep shot. Jimmy Garoppolo is adept of playfakes and booting off it and many of their explosive plays have come off those wrinkles and misdirections. This Steelers’ defense has struggled to play and communicate as a unit and even though Minkah Fitzpatrick is talented, there’s likely to be growing pains with him so new to the group.

3. Mason Rudolph is given some rope.

As in, Randy Fichtner can’t play scared in this one. The Steelers drafted him with visions of being the heir to Roethlisberger’s throne and though they’re getting a look earlier than anyone wanted, they have to let him rip it. Careful aggression, sure, running the same exact offense and making him throw it 50 times is a clear mistake, but he’s gotta be able to take his shots and pick his spots. Change tempo, run the hurry up in two minute situations, heck, I might open the game with a deep shot to Washington. See if you can get going early. Playing with too much caution isn’t how you turn a season around.

Big one here. Steelers ranked 27th in pre-snap motion the first two weeks. A lack of motion means the defense can better hide their coverages and you want a QB making his debut like Rudolph to have all the data possible pre-snap. Offense can’t be static. Motions, shifts, window dressing to move the defense’s eyes. Simply lining up and snapping the ball isn’t going to provide the offense the spark it so desperately needs.

2. The front seven fails to tackle (and secure their run fits).

I’m sure most fans don’t know a whole lot about Matt Breida and Raheem Mostert. After today, you might learn a lot about them. Both guys run hard, are able to create, and can rip off big plays, even if neither have any electric traits. If this front seven doesn’t tackle well or can’t secure their gaps in the run game, those two are going to do damage. Seattle stayed on-script last week with a good-enough rushing attack and provided some splash. Defense can’t allow a repeat performance.

3. TJ Watt doesn’t get moved around.

A little niche here, I know, but if there was ever a time for the coaches to actually practice what they’ve preached over the last year, flipping Watt and Bud Dupree, then it’s never going to happen. At RT, the side Watt is on, the 49ers have Mike McGlinchey, the #9 pick last year who has graded out as one of the top pass blockers in football. At LT is sixth round rookie Justin Skule for the injured Joe Staley.

You do the math.

Watt’s gotta be able to flip and beat up on a guy like Skule, especially if Dupree struggles. This is also a plus matchup for Ola Adeniyi, who should be able to rip and dip under the 6’6 Skule.