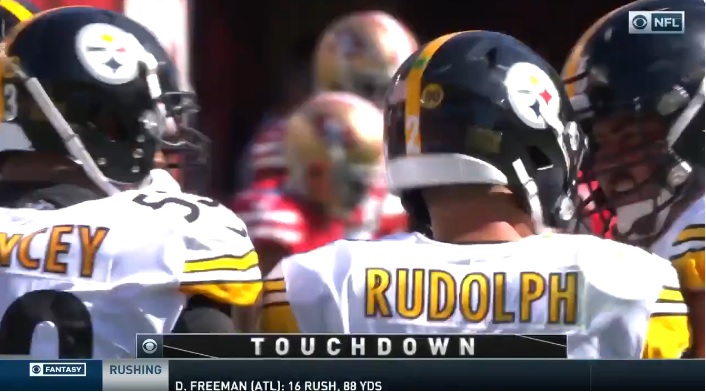 Winners and losers from the Pittsburgh Steelers 24-20 loss to the San Francisco 49ers.

Minkah Fitzpatrick: Fitzpatrick sure made the Steelers gamble pay off in the first half. He capitalized on a Bud Dupree pressure and Joe Haden tip to intercept his first pass as a member of his new team. He followed that up to forced a fumble later in the half. His two turnovers match the total created by Sean Davis and Terrell Edmunds last season.

Devin Bush: There is certainly an element of luck to recovering fumbles but Bush already has three over the last two weeks. Credit to him and his football awareness. For a team that struggled to recover any fumbles last year, it’s nice to see him be opportunistic.

Thought he played faster and was a surer tackler too, bringing Matt Breida down in the second half to save a big run.

JuJu Smith-Schuster: The offense desperately needed a spark and JuJu answered the call. 76 yard touchdown, showcasing his run and catch ability despite running in the 4.5’s at the Combine. His opportunities are few, getting bottled up and subdued by an offense that often can’t get out of its own way, but he’s capitalizing when he gets the chance. Diontae Johnson did similar on his 38 yard TD, though he took advantage of some pretty bad CB play by Jason Verrett.

Stephon Tuitt: Tuitt continues to tear through offensive lines this season. His sack came by beating OT Mike McGlinchey, one of the league’s better tackles, and the 49ers had no answer in blocking him. He’s on pace to easily set a career high in sacks. He’s already about halfway there.

TJ Watt: Banner day for him. An interception, fumble recovery, and couple of breakups in coverage. He’s arguably the top playmaker on this defense and whenever there’s a big play, #90 always seems to be the one involved.

Alejandro Villanueva: The offensive line didn’t play partticularly well but Villanueva had his hands full with Nick Bosa, getting beat and partially allowing at least one sack. Ramon Foster seemed to struggle in pass protection too while Matt Feiler gave up another sack, though Rudolph may have gotten too much depth on his drop.

Villanueva, weirdly enough, got subbed in on the punt block team in the 2nd half. Just thought it was interesting to note. Our Tim Rice grabbed a clip.

Is that Al V up the middle rushing a punter @Alex_Kozora oh boy danny #Steelers pic.twitter.com/nJi7l3NLGD

Randy Fichtner: It’s hard not to put at least some of the blame on Fichtner. Though in a difficult spot, he did Rudolph no favors in his debut. No motion really hurt this team. Offense can’t be static with it struggling as much as it is and expect to move the ball. It’s a delicate balance between doing enough and not putting too much on Rudolph’s plate but the offense was again painful to watch and he’s going rightfully hear about it.

3rd Down Offense: A woeful area of this team through three weeks. 3-12 in today’s loss. Mike Tomlin has harped on needing to win possession downs but this offense has yet to figure it out. It stalls out drives, shortens others, and keeps the defense on the field.

Mark Barron: While the defense played well enough to win today, Barron looked slow and showed his age. Playaction might have caused him to trail but he failed to keep up with FB Kyle Juszczyk for a 20+ yard completion. Late in the game, he was called for holding that gave San Fran a first down.

He’s yet to make any impact plays and it’s fair to wonder what his role with the defense will be once Vince Williams’ hamstring injury heals.

James Conner: Conner ran hard but that 4th quarter fumble was obviously costly. A recurring theme for him, unfortunately. Ball security is one of his biggest flaws.