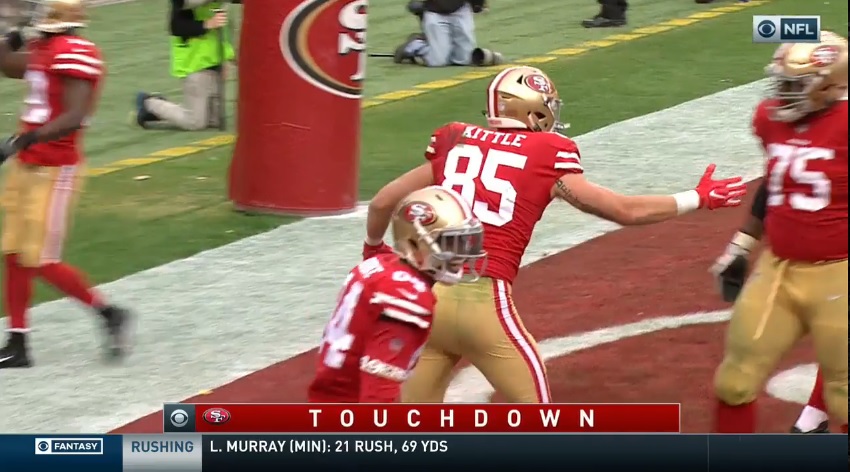 An NFL single season record for receiving yards in a season by a tight end (1,377)

A San Francisco 49ers single season record for receptions by a tight end (88).

Seven receptions and 210 yards receiving in one HALF versus the Denver Broncos.

There are 31 other teams kicking themselves for letting the former Iowa Hawkeye get to the fifth round of the 2017 draft. He doesn’t just catch passes either. He’s an excellent blocker as well.  He is athletic, physical and Head Coach Kyle Shanahan and his staff like to design plays to get him the ball. It hurts me to say this, but they have to be excited at the possibilities when facing the Pittsburgh Steelers coverage this week.

It’s been well documented the Steelers have trouble covering tight ends. In 2018, there were 42 touch downs scored against the Steelers. Seven of those were by tight ends. Seattle’s Will Dissly had 8 receptions and 2 touchdowns in 4 games in 2018. He had 5 receptions and 2 touchdowns this past week. No offense to Dissly but he is not on the level of Kittle.

Kittle will be used all over the field. He will line up as the traditional in line tight end as well as the wing, slot, wide and in the backfield. His route tree is not limited as they will use him on all three levels.

I watched their first two games of 2019 to get an idea of how they are using him.  In 2019, the majority of his routes have been in breaking routes.  A lot of the damage he has done has been in the middle of the field.

This is something the Steelers have struggled with the first two games. Players are biting on the play fake and leaving the middle of the field behind the open behind the linebackers. San Francisco likes to use play action and misdirection to find openings for their receivers.

From 22 personnel, they motion Kittle (85) to the left side of the formation and show an outside Zone left look. Kittle takes an outside step at the snap and gets the safety Jesse Bates III (30) moving outside. Kittle plants and comes across the formation with the QB rolling out with him and hits him in stride. They’ll run this to either side.

They’ll also run this variation out of 21 personnel. Kittle runs the same route and gets the safety to bite to him but the WR tight to the right of the formation sells the attempted reach block and then releases out to the back side of the play and is wide open. This is an example how he can affect the passing game for others.

From 23 personnel, this is a second and 5 play in the red zone. They swap Kittle with fullback Kyle Juszczyk (44) lining Kittle up in the backfield. This is play action sending Kittle into the flat leaving the middle linebacker to try go a long way to cover him. Juszczyk was called for offensive pass interference on this one costing Kittle a TD.

From 13 personnel, another outside Zone look where he runs a sneak route behind the LOS. The flow of the defense goes right leaving him open on the back side.

The 49ers make good use of his athleticism and will use him in the slot and out wide. Most of his routes this year ended up inside routes. Here are few samples of what they do.

From a bunch formation on the left, Kittle is the widest receiver. He’ll release under the two receivers to the inside.  This route is a curl in to the middle of the field. I also saw him run a dig route after the WR’s release and clear out space.

From wide left, this is a short in route winning the one on one matchup. He’ll also run digs and an occasional go route usually to clear out space underneath the route for a teammate.

Here are a couple from the Game Pass Film Session with Ron Jaworski and Brian Baldinger.

Here is a corner route where he motions into the slot. The outside WR will run a go and take the corner with him. Kittle runs up the outside of the linebacker and will lean to the inside to get the LB to think he’s going in and breaks out for the easy reception.

The options are unlimited with a tight end like this. Other routes not seen above included screen, shovel pass, out routes and post patterns. And when they’ve gone through all that, they mix in the trickery.

Against the Los Angeles Rams, he’s lined up as the inline TE. At the snap he makes a veiled effort at a cut block. While on the ground, notice his head come up to watch the linebacker in the middle and when he breaks outside, Kittle pops up. Can you see Randy Fichtner calling this? Me either.

The Steelers defense is going to have their hands full with Kittle so what can they do? What they have done in recent history has not worked so let’s hope some changes are afoot. Here are some possibilities on what we might see.

You can see from the clips above that no matter where he was lined up he was generally given a free release. Maybe that is by design because I did see a couple of safeties try to disrupt his routes with the 5 yard area and he used his physicality to move them out of the way.

They still need to try though.  Jam if you can when he is lined up inline; just be ready for it to be a battle. And it doesn’t have to be whoever is in coverage. Bud Dupree and T.J. Watt can both be used as an occasional jammer. When he’s split to the slot or wide; mix it up by putting a defender in his face. Make him work to get into the route. Disrupt the timing.

Who do you use to cover him?

Against Seattle it looked like Devin Bush was the one supposed to be in coverage on the touchdown plays. Bush has the athleticism but lacks the height. On both of those plays it looked like Mark Barron had the running back as his assignment.  Maybe they should switch.

Barron has a height advantage over Bush and obviously has more experience. I would think it’s a least worth a try using Bush to cover the RB and Barron on the TE.

Another option would be Terrell Edmunds. They could use the big nickel package with 3 safeties and use Edmunds to play loser to the LOS.

Mix Up the Coverages

San Francisco has good but not great receivers.  Marquise Goodwin (4 receptions)  is a burner and Deebo Samuel (8) is an impressive second round pick but I think Joe Haden and Steven Nelson should be able to play well against them.  The other 3 WR’s have 5 total receptions.

Mix in some double coverages they could be effective especially on the inside routes. Man Coverage with safety help over the top using a bigger player to play Man to minimize the throwing window.

Regardless of what the situation is or the coverage at least one defender must have eyes on Kittle and go where he goes all the time. Odds are you’re not going to be able to shut him down completely. He has success against linebackers and safeties so there isn’t an easy fix.

The defense must be start being creative and physical and not allow the opponents best player to beat them.