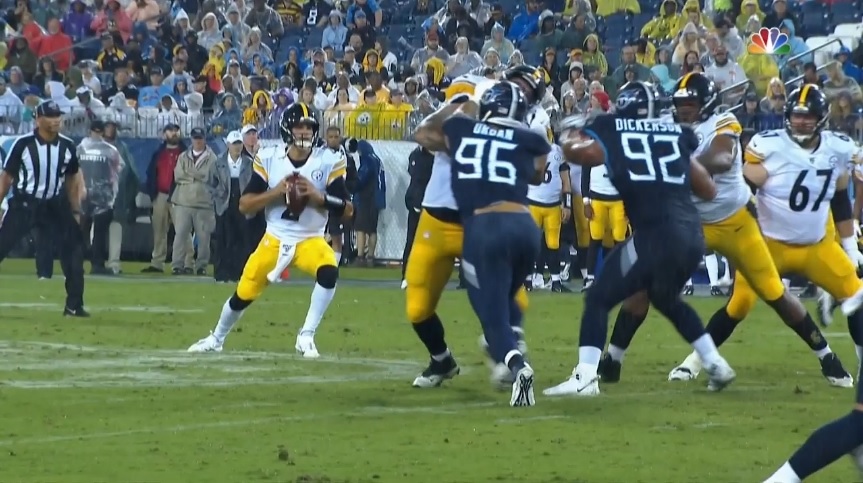 Following each game in the 2019-2020 Pittsburgh Steelers season I will be giving you my 10 takes.  These aren’t going to be hot takes and meant to shock the world. This will be instant reactions to the game written while still in that period just following the game when the emotions are high and the ideas are fresh. Included will be thoughts, observations, queries and reasons that caused me to yell at the television.

1. A bit jumpy on the Edge – I think I saw it twice tonight and I believe it happened in previous games as well. I could be guys being over anxious wanting to make plays to make the team but it can’t continue. Bud Dupree and Tuzar Skipper each had neutral zone infraction vs Kansas City. Tonight it was Terrell Edmunds on one play and the other may have been declined. Must be cleaned up.

2. Kameron Kelly stepping up – We showed you this week how he was playing with the ones in sub packages and tonight he kept his arrow pointing up. He stepped up early to make a tackle for no gain early on a third down run. Later in the second quarter he made a tackle on A.J. Brown and forced a fumble. After just one tackle last week he stepped up this week with four.

4. Switz-burgh – It was comforting to see Ryan Switzer back there on kick and punt returns. The numbers weren’t eye popping with 3 kick returns for 57 yards and 1 punt return for 20 yards but I have a trust with Switzer. I trust he will catch it, I trust he will make the right decisions and I trust he won’t try to do too much. That is my return guy.

And if you haven’t seen he is selling these to support UPMC Childrens hospital. If you can get one, it’s a great cause.

5. Stunt Men – In my first Ten Takes I mentioned that the defense was running a lot of stunts and twists that had potential. Then recently Cameron Heyward mentioned after the game against Kansas City that the defensive line stunts were working. Against Tennessee I think they were working as well as I thought a stunt led to the Stephon Tuitt sack for a safety. More love for the defense.

6. RB’s protecting the QB’s – A quarterback’s best friend can be the running back picking up the free rusher to give him time to make the pass. James Connor has become a very good pass blocker. Benny Snell, Jr. has shown similar ability to be that protector in college and in the preseason. It was not a strong point for Jaylen Samuels coming out of college because it wasn’t something he was asked to do. Against Tennessee on the pass to Juju Smith-Shuster for the first touchdown he worked across the formation to find the blitz from the slot to give Ben Roethlisberger time to make the throw. Good to see from all three RB’s.

7. I don’t want to get excited (part 2) – James Washington has looked damn good. Evidently he’s drop some weight and he looks a bit quicker. His hands have been good and I feel any confidence he may have been struggling with last season may be gone. We still need to see that confidence and connection with Roethlisberger but if he can make a jump this season from game one, this offense could have another wide receiver threat.

8. Gaps to one side? –  Definitely need to watch the tape again but it looked the successful runs the Titans had all went to the defensive right side. I’m not sure who the defensive personnel was on these plays were but it’s something I want to take another look at.

9. Dirty Red was born too late – Tyler Matakevich is a native of one town over from the one I grew up in so I enjoy seeing him do well. I love his instincts and ability to read his keys. Playing downhill against the run he is a tackling machine. If he was born in an earlier era he’s probably be a starting inside linebacker and be among the league leaders in tackles. I wish I could give him more speed.

10. Skipper doesn’t want skip town – The NFL is hard. Getting a chance to show what you can do is a rare opportunity. And when a player gets that opportunity they must do everything they can to not spoil that opportunity. He had one of the Steelers seven sacks against Tennessee giving him a sack in each of the 3 preseason game. He is making it very hard for the Steeler to keep him off the roster.