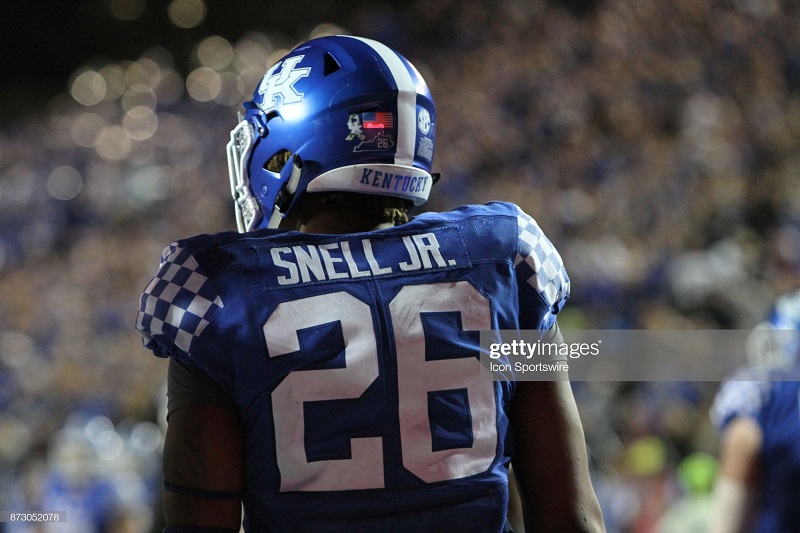 Snell, however, unlike fellow Steelers running back Jaylen Samuels last year, enters his rookie season with quite a bit of college experience as a blocker. Not only does Snell have experience as a pass protecting running back upon entering the NFL, he wasn’t too bad in his execution of that particular skillset at Kentucky. In fact, Snell graded out as one of the top pass protecting running backs last season in the 2019 Pro Football Focus Draft Guide and that says a lot with him playing in the SEC and logging as many offensive snaps that he did.

Below is just a small sampling of how Snell was in pass protection last season at Kentucky from a positive result perspective:

Early in Kentucky’s 2018 game against Mississippi State, we got to see Snell effectively cut down a looping defensive lineman.

Later in that same game against Mississippi State, we again can observe Snell picking up a delayed blitzer coming up the middle and not only that, he put the defensive player on the ground.

And here’s yet another fine pass protection rep by Snell against Mississippi State.

Not only did Snell seemingly represent himself well as a pass protector in 2018 at Kentucky, there are plenty instances in his tape from last season of him blocking effectively on running plays.

Here is one such running play that features Snell workings as a lead blocker and this one came via a jet sweep in Kentucky’s game against Georgia this past season.

Later in that same game against Georgia, Snell once again showed off his blocking skills in the second level via a designed quarterback keeper.

The biggest takeaway from watching Snell’s pass blocking tape from the 2018 season is first, that he certainly has the desire to want to handle those chores. Secondly, Snell seems to have a fairly good understanding of diagnosing who he is supposed to pick up on blitzes. He can have all the want-to in the world when it comes to his pass protection skills, but if he can’t diagnose or understand which player he’s responsible for, the failure to do so will ultimately result in a Pittsburgh quarterback taking a few unnecessary sacks or hits.

When the Steelers 2019 training cap finally gets underway later this summer, it will be interesting to see and hear about how Snell fares in the very unfair backs on backers drill and if he can ultimately hold his own against the likes of linebacker Vince Williams. I expect those initial reports on Snell from that particular drill will be positive as he showed plenty times during his college career that he was up to the task of blocking linebackers and others.