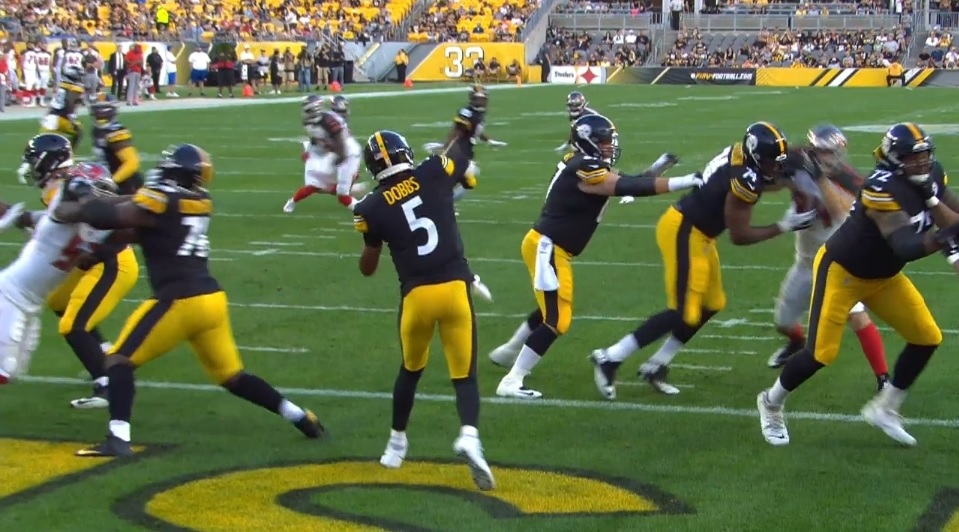 Following each game in the 2019-2020 Pittsburgh Steelers season I will be giving you my 10 takes. These aren’t going to be hot takes and meant to shock the world. This will be instant reactions to the game written while still in that period just following the game when the emotions are high and the ideas are fresh. Included will be thoughts, observations, queries and reasons that caused me to yell at the television.

1. QB’s taking shots down field – What has become a staple for the Steelers offense stayed true no matter who was taking the snaps. They like to stretch the field and work the ball deep and showed that early and often. There were shots downfield with varied success but it was good to see the backup QB’s not be afraid to let it fly.

2. DB’s missing tackles – A bugaboo in the past has been missed tackles and it showed its ugly face again. Particularly with the defensive backs. No need to name names this early but there were plenty of opportunities for the DB’s to make stops that they missed on.  I’m guessing this will be emphasized when watching the game tape this week and expect improvement next week.

3. Hello, James Washington – Right from the get go James Washington shined tonight building on how he played in the last couple games last year. Whether it was with Joshua Dobbs or Mason Rudolph he showed a good connection it the QB and made the receptions look easy. Lots of passes to go around this year and I’m looking forward to seeing him grab a bunch.

4. Why is Javon Hargrave in the game deep in the second quarter? – Are we as fans higher on Hargrave than the Steelers are? A far as I know he’s a member of the starting defensive line and here he is on the field, chasing down RB’s late in the second quarter. He’s in a contract year and I think we are all hoping he will be given a contract extension so it surprises me that such a valuable player would be kept on the field so long. To me it seems risky having him play that much in week one of the preseason.

5. One of these backup QB’s will be on another roster in week 1 – Too much of a good thing isn’t bad and after this game I came away pretty impressed with the talent in the QB room. Dobbs started things off and showed off with his arm and his legs. Rudolph came in and kept the good time rolling. Both seemed to work through progressions and make good decisions for the most part. Then Devlin Hodges stepped in. Alex had some good things to say about him in his camp notes and this was the first time I got to see him. There was a lot to like showing patience in the pocket, a quick release and control of the offense. That would seem to leave 4 players for three spots. Injuries are always an issue and we’ve already seen one injury to the backup QB in Philadelphia. There’s a chance one of these guys can be traded and if I had to guess now, I might be Dobbs.

6. Boz is back – Kicker in the NFL is a fickle position. Kind of like left handed relievers in baseball. They can be consistently good for a long time and then one thing can throw them off and bam, they look terrible. For Chris Boswell his groin was an issue. I don’t have to tell you but he had a terrible year. He looked healthy, he looked confident and the results of his kicks were the evidence. I have full confidence in him.

7. ILB making plays – One of the beauties of watching preseason games is you get to see a lot of players play the same position. One of the standout positions of the game was inside linebacker. Devin Bush and Mark Barron started and Bush made a bunch of plays early and often. Competition breeds excellence and the players the followed stepped up to the challenge. Tyler Matakevich played well and had a big strip sack. Robert Spillane made a bunch of plays versus the run, pass and on special teams. Ulysses Gilbert had an interception on a 2 point conversion and 1.5 sacks. Even Tegray Scales showed up on special teams. Complete overhaul of talent and depth from last year.

8. DL ran a lot of stunts that show promise – The defensive line wasn’t running the usual vanilla defense and rushing straight ahead on pass plays. The ran stunts and twists, quite a few in fact, that may not have gotten pressure as much as you would like but showed potential to be disruptive. With a little more quickness from the penetrator and the looper it looked like there was a good base to build upon to get the much desired pressure up the middle.

9. Welcome to the NFL, Justin Layne – The Buccaneers wasted no time and tested Layne early and often. It seemed any time he played Off coverage, were he gave a very big cushion, they targeted him for easy receptions.  He looked more comfortable in Press but this is all good for him.  It’s a chance to learn and he will.  He didn’t have a lot of pop when making tackles and looked very thin.  He definitely should benefit from an NFL weight training program.

10. Don’t tell the rest of the NFL about the MAC – In 2018 there were 71 players from the MAC conference in the NFL. You might not be shocked to find out that the Steelers led the way with 8 players. The Steelers have shown an affinity to finding productive players from this conference and this game those players made their presence known. A quick list of the MAC guys making plays include the aforementioned Gilbert and Spillane along with Ola Adeniyi (3 tackles, couple of pressures), T. Jones (2 tackles, .5 sack) , Trevon Mathis (4 tackles) and Tuzar Skipper (2 tackles, 1 sack). And don’t forget about Rosie Nix, Ben Roethlisberger, Sutton Smith, Casey Sales, Diontae Johnson, and Chukwuma Okorafor also on the roster. And just for the record, if you don’t watch the MAC games regularly, check them out. They usually play on Saturday but starting in November they play throughout the week from Tuesday through Thursday as well giving us quality football to watch all week.