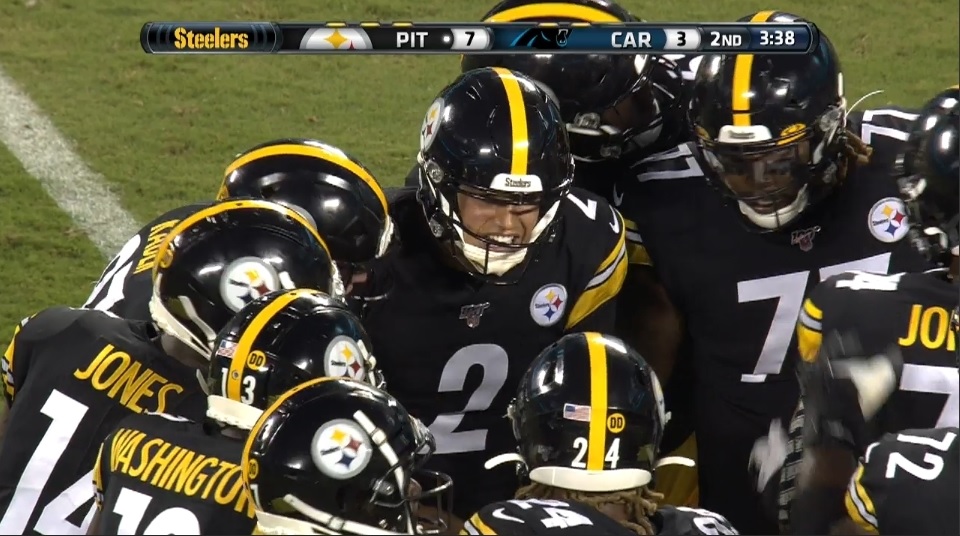 Unfortunately, I was unable to watch or even listen to the SNR broadcast of the game. I was in the air on my way to the Philippines. I had WiFi service all the way up to about 30 minutes to kickoff when it cutoff with a notice that we were outside the coverage area. I was somewhere above the arctic circle. Very aggravating but just had to wait until my short layover in Japan to find out what had transpired against the Carolina Panthers.

Matthew Marczi described what we should watch for in the game against the Carolina Panthers. Matt directed us to several roster battles. Special teams play may be a deciding factor. Would Tuzar Skipper get a chance to make some tackles on special teams? How about Diontae Spencer or Johnny Holton? Would either show enough to supplant either Ryan Switzer or Eli Rogers?

Tom Mead will identify matchups to watch each week this season. Tom highlighted the match up between the Steelers offensive line and the Panthers front 7. The battle in the trenches may help determine which young players may find a spot on the practice squad or as the 8th or 9th lineman on the 53-man roster.

The focus has quickly shifted to the 53-man rosters and practice squads. So, this week instead of discussing the last preseason game, I will give you links to Dave Bryan’s, Alex Kozora’s & Matthew Marczi’s final roster predictions. Saturday is the first step in finalizing the week 1 roster as the team cuts the roster from 91 to 53 players. Following the waiver period, the Steelers will form their practice squad and conduct any transactions to sign players from other teams or even make a trade. Tight end anybody?

Dave Bryan’s final 2019 53-man roster prediction can be found on the link.

All three keep only eight offensive linemen which enables the Steelers to keep 10 linebackers including Ulysses Gilbert III & Tuzar Skipper. All three also have Johnny Holton on their roster instead of Eli Rogers. The only outlier is Matthew favoring Marcus Allen over Jordan Dangerfield. Of course, any trades or signing players cut from other teams could disrupt the predictions, we will see very soon.

Steelers Depot readers commented 520 times on the game’s first half Live Update and Discussion Thread. Reader Tom White summarized his thoughts of the first half near the end of the thread. Check it out:

1. Rough half for the DB’s. Marcus Allen took a bad angle and got burnt, Layne burnt, Sutton burnt…. rough stuff. There were a few highlights with the Sutton INT and Kam Kelly looks as for real as it gets. I know Davis is the guy but man, maybe it should be Kelly’s job.

This top-rated comment by Reader783 (Good Juju!) explains why all three predictions only kept 8 offensive linemen: “Not a good showing from this second/third team OL.”

Several folks commented on Benny Snell’s speed or lack thereof. Wisguy50 got a top-rated comment that put a silver lining on a dark cloud, “Snell is way too slow, but he should be better next year. Seems like our running backs are a lot leaner and quicker their second season.”

Discussion picked up in the second half. 696 comments in the 2nd half live update & discussion thread . Still well below the standard, let’s see how we do against the New England Patriots!

Franco32 has given fair warning to the Steelers organization: “If they cut Skipper, I will march on Steeler HQ.” A lot of folks replied they would be there too. I know the location of a secret stash of pitchforks & torches on the North Shore. Hopefully, it can remain in situ for another year.

Reader783 (GoodJuju!) reaches deep into the inner workings of the Steelers strategy; “Conspiracy theories are fun: they are purposely bombing Hodges to stash him on the PS.”  Jones had another take, “Hodges is getting zero favors from the o line, receivers or running game….”

Looking forward to the regular season. I love reading your comments.

The Pittsburgh Steelers are about to enter a fascinating phase. How will the Black & Gold perform after losing three 1st team All-Pro talents in their prime in the past two seasons. I don’t think may teams could weather such losses easily. After narrowly missing the playoffs last season, will the 2019 edition of the Pittsburgh Steelers rebound?

I always like to offer a music selection. Here is War (What is it good for?) by the Edwin Starr. Why not one more, how about Gordon Lightfoot singing Sundown?