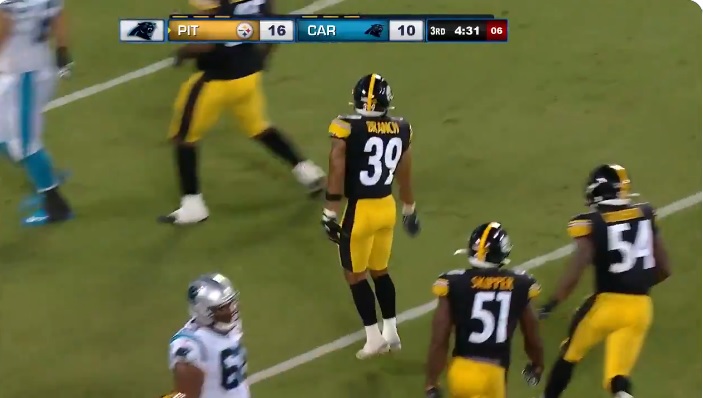 Your winners and losers from the Pittsburgh Steelers preseason finale, a 25-19 loss to the Carolina Panthers.

Tuzar Skipper – Of course we have to start with Skipper. Two more sacks and a forced fumble give him 5 QB takedowns on the season, the most by any Steelers’ player since at least 2006, as far back as NFL.com’s stats go. An early stats of the weird for you. Just as importantly, he played on special teams – finally! – recording two tackles on the kick team. Will sure be hard to keep him off the 53 man roster.

Johnny Holton – Holton might be one of those names Mike Tomlin refers to of earning a roster spot in the preseason finale. He continued to prove himself as a vertical threat with a pair of 40+ yard receptions, the latter finding the end zone. He made a kick coverage tackle on the ensuing kickoff. Making a push to be the team’s #6.

Mason Rudolph – Rudolph all but locked up the #2 job. Josh Dobbs made poor decisions and struggled to move the offense while Rudolph cut through it like butter. He doesn’t have a huge arm but as we’ve talked about all camp, shows great touch and placement, linking up with Johnny Holton twice downfield. Didn’t have the greatest start to camp but sure finished strong.

Marcelis Branch – Branch may have made a last second case for at least extra practice squad consideration. His calling card is his hit power but he chipped in an INT – granted, the ball was thrown to him – tonight. Like his energy and tenacity.

Jayrone Elliott – Elliott isn’t making this team and as a veteran, he should play well in this finale even if he’s new to the team. But kudos to him for forcing a sack/fumble and then recovering it 91 yards the other way for a TD. Good for him. Maybe he can end up on a roster when injuries strike.

Ulysees Gilbert III – Before there was Skipper, there was Gilbert. Gilbert seemed to cement his roster spot by blocking a first quarter field goal, reminiscent of Roosevelt Nix blocking a punt in 2015 to secure his spot. Like Skipper, a really hard cut to make at this point, but we’re getting into a numbers crunch at linebacker. Can they keep 10?

Isaiah Buggs – Nice bounceback game from Buggs who struggled against the Tennessee Titans. Worked off blocks, got pressure, found the ball. Finished with four tackles and a half-sack. He’s locked in as the #6 defensive linemen and will almost certainly start the year inactive.

Backup Offensive Line – U-G-L-Y they all wish they had an alibi. Film room session isn’t going to be pretty this week though a couple of those names might not be with the team. Derwin Gray and Jerald Hawkins in particular struggled, Hawkins just looks so darn robotic now, and at one point, this unit was called for three straight holds. Mercifully, the Panthers declined one, avoiding a 4th and 40. But rough end to things for this unit, who looked like they were playing on the road and on a short week. Not a good mix for young guys.

Benny Snell – Snell didn’t have many run lanes but with how ugly his aggregate preseason numbers looked, it’s only fair to put him on this list at least once. Eight carries, 12 yards, long of four. Burst clearly isn’t there though understand the Steelers knew they were taking a big back and he’ll drop weight in the offseason, just as James Conner and Jaylen Samuels have done before him.

Matthew Wright – Wright’s calling card was that he didn’t miss two kicks in a row. And that held true. The problem? He missed two of three, connecting only on the middle attempt. The field goal attempt looked like a poor snap/hold, Kameron Canaday didn’t play, and he had already lost the battle to Chris Boswell, but a sour note to go out on.

Eli Rogers – Rogers didn’t start in the slot for the second straight week and Ryan Switzer feels comfortably ahead. Holton’s performance might have Rogers in some serious trouble too.

Diontae Spencer – No work in the return game tonight should end his chances for a roster spot. Really disappointing. He wouldn’t have had a chance in the kick game either, Carolina just kept booming them out of the end zone, but Eli Rogers and Diontae Johnson worked over him in the punt game.

Justin Layne – Layne was beat for a long touchdown, continues to look stiff, and left the game with an injury. He’s raw, this isn’t unexpected, but clearly a long ways away from being ready to help this team.