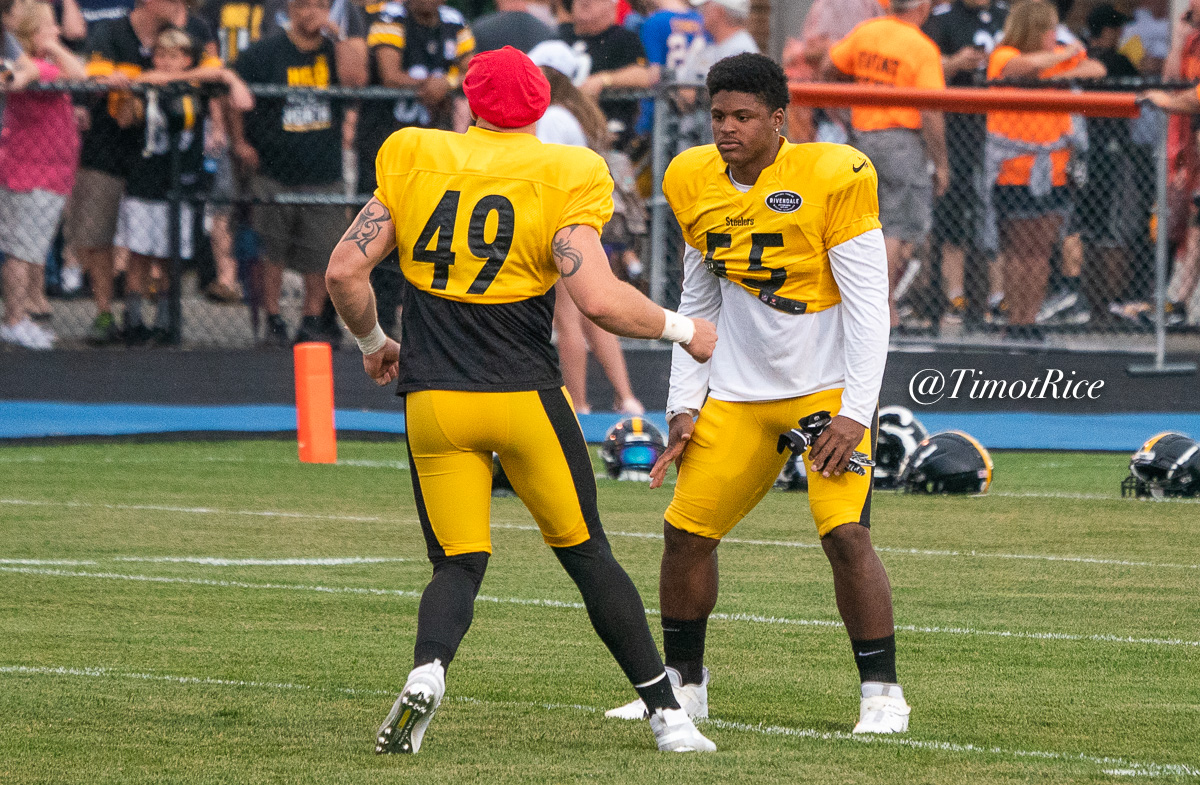 For the rest of the preseason, we’ll give a recap, position-by-position, player-by-player of what I saw during the 2019 Pittsburgh Steelers training camp and preseason games. Lumping the outside and inside linebackers together to get through the list before Week One.

Ola Adeniyi: The torn meniscus is the only sour note to an otherwise great camp. He was literally unblockable for the first week and though he had his hands full with Matt Feiler when injuries pushed him to 1st team, but it was a valuable learning experience against a starting-caliber player. He saw more burn and success on special teams. Bummer there’s another injury slowing him down though this one appears less severe, plus he had more time to recover, than the hamstring pull he suffered a year ago.

Tuzar Skipper: 2019’s version of Adeniyi, right down to the school they attended. Skipper has flashed power since the beginning of camp, playing with heavy hands and converting speed to power like a pro. He sets a physical edge in the run game and has been highly productive, already recording three sacks in as many games.

His issues though, like Adeniyi last year, are everything else. He’s stiff and slow going backwards and his change of direction. Don’t ask him to cover. And not only is there a concern about how well he’ll perform on special teams, the team has barely used him there either. Only three snaps. I’m as baffled by it as anyone but it doesn’t bode well for his roster chances.

Still, he’s overcome every challenge they’ve thrown at him. Come a long way as a tryout player back in rookie minicamp.

TJ Watt: Watt missed the first half of camp with a nagging hamstring injury suffered during the conditoning test but once he got on the field, he made an impact. He and Bud Dupree have lit up the two preseason games they’ve played in and Watt’s hand use, strength, and athleticism have all been on display. Dusted Mitchell Schwartz, a top ten tackle, against the Chiefs. Has the makings of a 15+ sack season if all goes well.

Bud Dupree: Dupree is showing the ability to convert speed to power and that’s critical for him having the year we want – and he needs – to have. His camp was relatively quiet but the games have been impressive and it feels like he’s trending in the right direction. The thumb injury he suffered shouldn’t cause him to miss Week One but you always worry about those nagging injuries with him. Fingers crossed it doesn’t follow him.

Devin Bush: The team’s first round rookie looks as advertised. He had some great battles with Benny Snell in camp and to be clear, took his lumps, losing a couple of those and struggling in the first backs on ‘backers session but everything smoothed out by the end. He took over the first half of the opener, notching ten tackles against Tampa Bay. He’s flashed his range, taken on blocks better than I even expected, and been trusted enough to work on all three downs and every package. He figures to be “the guy” at inside linebacker and favorite to win Rookie of the Year.

Ulysees Gilbert III: A great camp for one of the team’s 6th rounders. Maybe a bit of a quiet start but it quickly became evident he has the talent to get on the roster now and long-term, has the traits to play in this league. Rangy, competitive in coverage, and better processing and tackling than what I saw on his Akron tape. His special teams value should give him the edge over Skipper and if he makes the 53, could be active Week One if Adeniyi remains out. Happy with UG3’s performance.

Tyler Matakevich: Dirty Red had his best camp ever. Don’t mistake that for him being more than what he is, a special teamer who shouldn’t see the field defensively, but it was still a great summer that locks in his roster spot. Top special teamer on this defense and one of the best tacklers on this entire team even though his range limits his ability to get there.

Robert Spillane: Sneaky good camp for him. Average athlete, at best, but takes good angles to the ball and is a physical, impactful tackler. He translated the work he saw in backs on ‘backers to games, killing RBs and picking up a pair of sacks already.

Got picked on quite a bit down the seam, some of those were bad matchups I can’t blame him for, but he’s played well enough to deserve a practice squad spot. Got a decent amount of work on special teams too. His upside is a career backup but he’s done enough to stick around.

Mark Barron: Barron oddly got a few “vet” days despite being new to the team and though the start to his Steelers’ career has been a little rocky, he didn’t look great in the opener versus Tampa Bay, but his play has picked up since then. Based on what happened last week, he’ll see most of his action in the Steelers’ nickel defense, which should be used the majority of the time.

Anthony Chickillo: A chest injury knocked him out of the Bucs game and he hasn’t played since. His camps are like all the rest. Very good. He’s a smart, varied pass rusher and evidently healthy this year though I haven’t seen much of a difference. Coaches trust him and he’s a valuable special teamer who will begin the year as the #3.

Sutton Smith: Nearly an incomplete grade with all the time he missed. But he returned Sunday to make his debut against the Tennessee Titans. Good to have him back out there but they were 55 forgettable defensive snaps. He looks small, underpowered, and lacks the hand use to defeat blocks. He flashed a tiny bit very early in camp but disappeared and then missed the rest of the time, save for the final padless practice, with the injury. Right now, forget about the 53, he’s just fighting for a spot on the practice spot.

Tegray Scales: Got some work with the 2nd team (following the starting ILB rotation, of course) but fell down pretty quickly after Spillane impressed early on. He’s not a total liability but there’s no standout trait here either. Better against the run than he is in coverage. His lone camp INT came off a tipped pass.

Vince Williams: Williams was cautiously held out for a large chunk of the summer with a hamstring injury. Hurt it during Friday Night Lights and didn’t get back into game action until Sunday night versus the Titans. He did dominate that backs on backers sessions at the high school before going down. Not quite enough work to get a full evaluation on.

It appears his role will primarily come in base packages, which the Steelers used exactly 30% of the time in 2019. That number may go up a bit if the team scales back its dime packages like I expect but it’ll still be a significant decrease from last year.

Jayrone Elliott: An NFL veteran, he was signed after the rash of injuries at OLB. Should play a good bit tonight. If the group was thinner, maybe he’d have a shot, but his stay figures to be short. Not enough work to get an accurate evaluation of.