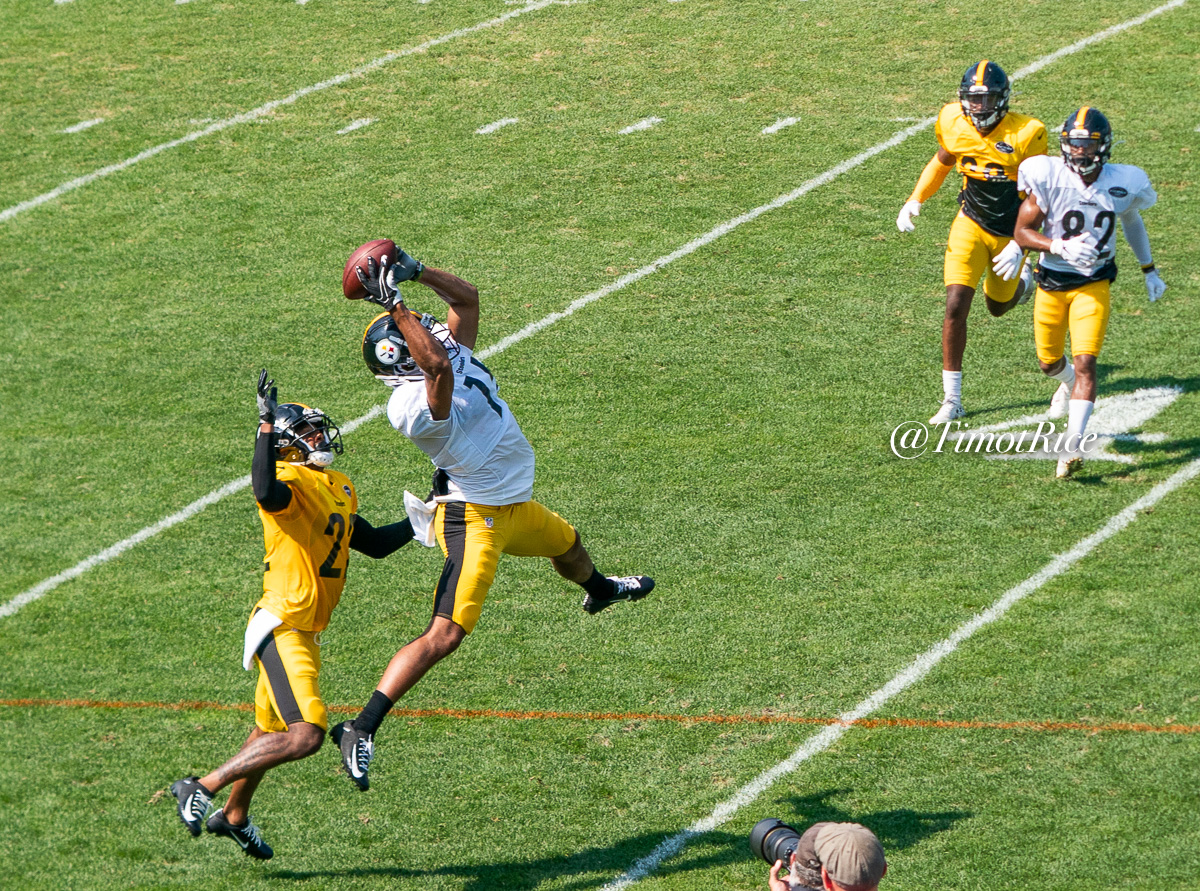 For the rest of the preseason, we’ll give a recap, position-by-position, player-by-player of what I saw during the 2019 Pittsburgh Steelers training camp and preseason games. Rounding out the skill positions with the wide receivers.

JuJu Smith-Schuster: Not that you needed to know much about him at this point, at least not in the preseason, but he had an excellent camp. Led the team, predictably, in receptions, targets, yards, and touchdowns. His average was impressive, a healthy 12.8, and he led the team in 20+ yard receptions with eight of them. Good stuff all around.

James Washington: A very good camp for him. And yes, we were saying the same things a year ago. But by all accounts, he’s in better shape, conditoning, and much improved above the neck to instill the confidence and create the consistency he lacked during that miserable rookie year. Washington balled out in his first two preseason games, winning vertically and showing the ability to attack and high point the football. Fully confident he’ll be the #3 receiver in 11 personnel, allowing JuJu kick to the slot. His numbers will probably be inconsistent, he’s primarily a deep threat, but there’s every reason to expect a jump Year One to Year Two.

Diontae Spencer: Spencer’s camp can be described by a series of ebbs and flows. Quiet-ish initial start, really picked it up around practices #5 through #9, came back to Earth in the preseason opener and end of camp, but rose again versus Tampa Bay. We profiled his ability to make the first man miss and he’s already up to nine missed tackles in the first two games, an absurdly good number. If he makes the team, it’ll be as a returner, not a receiver, though in the latter, his straight-line speed is legit. Not just a product of facing lesser competition in the CFL. He averaged 14.3 yards per catch in camp.

His hands though? Different story. Not the best.

But he has his work cut out for him and to bump Switzer off the roster, will have to make a compelling case these next two games. That means returning at least one kick or punt for a touchdown.

Eli Rogers: Rogers didn’t see the ball a lot in camp but he, as you’d expect, was a much bigger downfield threat than Ryan Switzer was in Latrobe. Rogers averaged 9.8 yards per catch. Switzer only 6.5. Rogers consistently ran ahead of Switz in the slot though Rogers lacks some of the extra value that Switz does (multi-facet return game, less versatile to move around the formation). If Switzer is the lock the media has made him out to be, then Rogers is the man whose spot is in danger though for now, I think he’s safe. He’ll just have to hold off Johnny Holton.

Johnny Holton: Holton missed the first portion of camp with a hamstring injury but got himself right in the nick of time. He had one of the best individual practices of any of the receivers, catching two deep balls the final session before the Bucs’ game, and then carried that over to a long 59 yard catch and run in the opener. He’s able to separate himself from the gaggle of small, slot receivers with his big frame, long stride, and coverage ability. Though he can return kicks too. To make the roster, he’ll likely have to find a way to push Rogers off of it. It does seem he’s practice squad eligible and I wouldn’t be mad if they stashed him on there. If he’s on the 53, he has value as a receiver and gunner.

Donte Moncrief: Unfortunately, pretty quiet for him. Blame that one a left finger injury that caused him to miss the middle chunk of camp. By the end of Latrobe, he showed chemistry with Ben Roethlisberger that bodes well for the two in the regular season. Despite the lackluster month, and the fumble in the Chiefs’ game, he’ll begin the year as the team’s starting X receiver opposite of JuJu.

Ryan Switzer: Switzer had a fine camp. It was as expected. He made plays underneath, often targeted by Roethlisberger, and looks like a trust and sure-handed return guy. I was hoping for him to do more damage downfield though. He had just one reception of 15+ yards. Compare that to Rogers who had three of them (with fewer overall catches). The value he brings as a kick/punt returner though is huge and probably enough to secure his roster spot. He also led the team with the most receptions – 22 – without a drop, though he did let one through his hands during one of the preseason games.

Diontae Johnson: Johnson definitely flashed his ability to do damage after the catch. I remember him turning Brian Allen around early on for a big run-after-catch. But he struggled to win vertically consistently during camp (he did flash that against the Chiefs though neither were really contested) and the dings he’s dealt with throughout have set him back. He’s looked shaky as a punt returner too and it’s hard to trust his judgment and ball security right now.

There could still be a role for him and he will make progress as the season goes on but he’s taking a back seat to start. It’s possible, likely, even, he begins the year inactive.

On the field, he’s probably a little better than the “C” grade I’m about to give him but the lack of availability pushes him down. That’s hurting him. But I want to be clear – his future remains bright.

Tevin Jones: After a terribly quiet start, Jones picked it up in the middle and finished second on the team in receptions and third in targets. No one saw more jump balls/back shoulder fades than Jones, who uses his size and frame well to box guys out. But he doesn’t seem to offer much more than that. Some versatility, he can play inside out, but not a strong route runner, questionable hands (five drops in camp alone, at least one at Heinz Field) and I haven’t seen much out of his coverage ability this year. I still think they like him and his potential and he may be kept on the practice squad, he should root for Holton to make the 53, but he didn’t wow me this year and I doubt he’ll ever be more than a practice squad-bubble player.

Trey Griffey: Griffey knew how to make a splash. Only 11 receptions despite practicing every single day but he averaged over 14 yards per snag, including two of 35+ on nine routes down the sideline. But he disappeared most days and there’s no standout trait about him. If they want to keep a special teams/coverage guy on the practice squad, it’ll be Holton. Not Griffey. Team kept him around all of last year but they’re probably moving on now.

Brandon Reilly: Barely enough information to get an evaluation here. Reilly was signed during camp after injuries to the position caused the lines to get thin. Decent size, questionable hands, and a below average athlete. He’s about an easy to move on from as anyone on the 91 man roster. If I had to rank ’em, he’s probably in that 88-90 range.