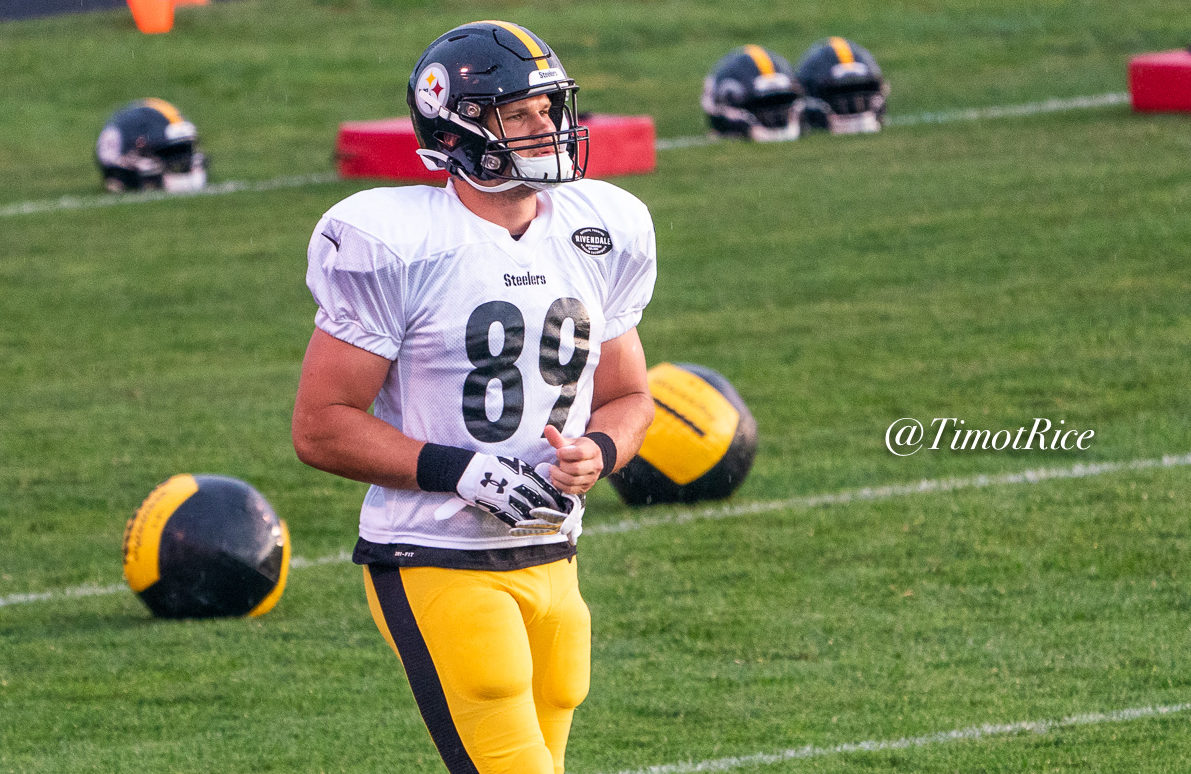 For the rest of the preseason, we’ll give a recap, position-by-position, player-by-player of what I saw during the 2019 Pittsburgh Steelers training camp and preseason games. Let’s review the tight ends.

Vance McDonald: Save for a couple of drops, that was one issue of his coming over from San Francisco, a very good camp for McDonald. He didn’t get a ton of plays downfield, averaging only 7.6 yards per reception, but that was partially inflated by how often he found the end zone (six touchdowns). That’s the stat that could increase in a big way in 2019. Not his receptions or yards. Randy Fichnter continued to split him out and isolate him on linebackers and even gave him a carry in seven shots for a two-yard score. He’ll be a key cog in the offense and I was thrilled he got through all of camp, his first as a Steeler, healthy and ready to hit the ground running for this season.

Xavier Grimble: Fairly quiet camp for him. Made a couple plays downfield and like McDonald, found the end zone a ton. Half of his 12 camp receptions went for scores though yes, for a guy who practiced almost every day, 12 receptions in team drills is pretty low. His blocking has continued to improve to the point where coaches let him leave the blocking sled early. It might not be fully ideal, though not dire, but he’s your #2 tight end.

Christian Scotland-Williamson: It was clearly evident CSW made a jump from Year one to Year Two. He played faster, looked more comfortable, and made strides as a blocker. Mike Tomlin told him if he can block a 4-3 defensive end, he’ll have a job. He recorded 53 yards on four receptions in camp, including a diving touchdown down the middle, a true highlight and testament to the work he’s put in. Few players worked as hard as him during camp.

Unfortunately, he hasn’t been healthy enough to show he can do that against 4-3 fronts like the Chiefs. He lasted five snaps in the opener before suffering a hamstring pull and missed last week. It’s unclear if he’ll be ready to go against the Tennessee Titans this Saturday. While the improvement is encouraging, the lack of availability really sets him back and he feels destined to be the “exempt” player on the practice squad again.

Zach Gentry: Gentry had his moments and was at his best the way he was at Michigan. Working down the seam. He’s best in a line. Crossers and seam routes. Everything else needs work and he had a low catch rate of 44%, the lowest of anyone at Latrobe.

He can generate some movement as a blocker on down blocks where he can use his size but he still struggles with leverage and creating power. Tight end is an obvious place to address from outside the organization but there may not be a good enough option to justify it. If anyone on this roster is going to be the team’s #3 against New England, it’ll be Gentry.

Kevin Rader: Rader is a serviceable blocker. That’s about all I can say for him. His hands are poor, tying the team lead with five drops in camp, his routes rigid, and he fumbled at the end of the Bucs game while getting flagged for a pair of holds versus Kansas City. Local kid, good story, but there’s not nearly enough there to worth keeping around. Maybe he can snag a practice squad spot somewhere mid-season. The injuries to Gentry and CSW have allowed him to play a lot of snaps and put on a ton of tape for the rest of the league.

Trevor Wood: Wood has a decent set of hands and long snapped throughout camp, getting work there in team drills when Kameron Canaday suffered a short-term groin injury, but he, like Rader, is stiff as a route runner and an even worse blocker. Just doesn’t generate any power. There isn’t much to get excited about here and at least Rader does something sorta-well.

Micky Crum: Signed the last day of training camp. Not enough information to offer a grade. Feels more like an H-back than a true, in-line tight end.