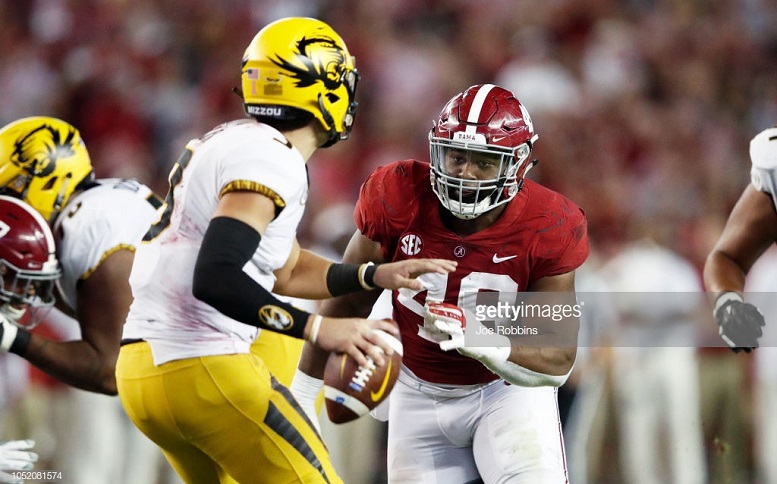 Depth along the defensive line is a need for every NFL team. Versatility is a big bonus for the backup defenders. Capability to play in multiple fronts and schemes while being able to play tackle and end is the ideal scenario. Players are rotated in and out throughout games and the injury bug can bite at any time.

When the second team comes in you don’t want to see any drop off. Now most teams don’t have 6-8 players of equal ability along the defensive line but one of thing every player can bring is effort.

Isaiah Buggs (Alabama #49) became the second Alabama defensive lineman drafted by the Pittsburgh Steelers since defensive line coach Karl Dunbar was brought on the staff after previously coaching for the Crimson Tide. He has the flexibility to play tackle and end and shows some good things on tape.  He has the ability to anchor vs the run, can shed blockers to make tackles and can really move people when he is inclined.

Vs Greg Little (#74) of Ole Miss he’s lined up across from the left tackle. He uses hand placement and leverage to drive him back and pancake him.

Buggs clearly has the ability to be a disruptor but that is not what you consistently see on film.  Consistent effort is what you want to see. Over the course of just a few plays his motor will run from very hot to very cold.

Vs Texas A&M, he’s lined up on the right edge for both of these plays.  On first down he has good placement of the long arm to the chest of the left tackle. He’s able to shed him to the outside and get inside to get the sack with plenty of energy to celebrate after the play. The very next play he’s extremely slow at the snap takes a couple steps forward and barely gets and hand on the blocker.

At Tennessee, he’s first lined up as the 2i inside the RG. He’s able to fight off the block and get in the tackle on the running back.  Two plays later he’s lined up at the 3T outside the LG. Again it’s a soft hand to the blocker and not much push upfield.

Vs Louisville from the right edge he quickly recognizes the overset by the LT and gets inside quickly for the tackle. Two plays later, lined up over the TE it’s a light jog up the outside. Maybe he saw the quick penetration by Quinnen Williams (#92) and pulled up but the QB still got the pass off. If he makes a legitimate effort there, maybe he doesn’t.

Vs Texas A&M, he’s the end man on the LOS to the right he needs to get outside and set the edge. He needs to beat the OT and the puller to the outside to force the RB back inside.

You don’t need to be physically gifted to have a high motor. It’s a state of mind. Making the choice, that on every play, you’re going to give it everything you can.

Buggs was drafted into a very good situation for him for a few reasons.

He has veteran leadership along the defensive line with guys like Cameron Heyward, Stephon Tuitt, Javon Hargrave and Tyson Alualu. If he makes the roster he won’t be relied upon right away, barring injury, to play a ton of plays. Probably 12-15 plays to give the starters a rest and if that’s the case he won’t have to hold anything back. Maximum effort on every play.

As mentioned, he has a position coach with connections to his alma mater. Dunbar will be able to get all the information he needs on Buggs from the staff at Alabama to understand his tendencies and what might help to get the most out of him.

And the Steelers have a need along their defensive line. At least one spot should be open and possibly a second with Daniel McCullers trying to hold off a bevy of players trying to take his spot.

Buggs has the character and the physical traits to be a part of the Steelers future plans. However he can’t let up. There are a bunch of guys vying for a roster spot along the defensive line. A consistent effort on every play going forward can’t hurt his stock and would be a good trait to add to his game.

Show us what you got, Big Pooh.