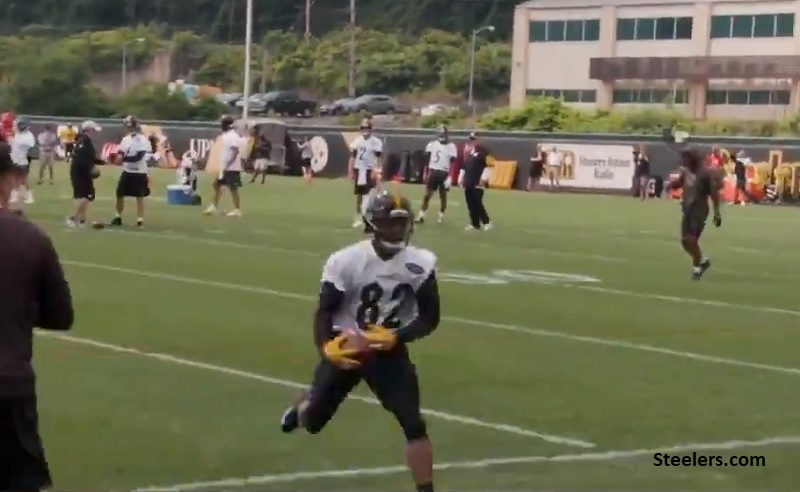 The Pittsburgh Steelers curiously have two wide receivers named Diontae on their offseason roster this year. While one of the two Diontaes, Diontae Johnson, is guaranteed to make the team after being drafted in the third-round in late April, the other Diontae, Diontae Spencer, who was signed to a Reserve/Futures contract in January, isn’t guaranteed anything right now. Because of the latter Diontae possibly being on borrowed time this summer, he knows he needs to make quite an impact quickly in practices and the preseason not only as a wide receiver, but more so as a returner as well.

“That’s a big part of what I do, fielding punts and kickoff returns,” Spencer said this past week, according to Kevin Gorman of the Pittsburgh Tribune-Review. “It’s going to be a big part of me sticking to the team, so that’s something I pride myself in.”

Spencer, who played his college football at McNeese State, has spent the last several seasons in the CFL with the Toronto Argonauts and Ottawa Redblacks. In 2014 he went undrafted and was signed originally by the St. Louis Rams as a free agent after first getting a rookie minicamp tryout with the Chicago Bears. The Rams, however, waived Spencer that July and before he could even show what all he could do in training camp. Last season with Redblacks, Spencer was named a CFL All-Star after finishing the year with 849 punt return yards and 815 yards on kickoff returns and 81 receptions for 1,007 yards and 7 touchdowns.

You can see his Spencer’s CFL touchdowns from last season below that I was able to compile and while watching them, I’m sure you’ll notice that he looks fast. That’s because he is fast as evidenced by him being timed anywhere from a 4.29 to 4.37 in his two McNeese State pro day 40-yard dash runs back in 2014. That pro day also included the 5-foot-9 inch Spencer registering a 40-inch vertical leap and a 10-foot, 3-inch broad jump and I shouldn’t have to tell you how impressive those numbers are.

Spencer’s successful resume as a returner dates back to his college career at McNeese State as he registered 29 punt returners for 258 yards and a touchdown in the 43 games that he played in to go along with 41 kickoff returns for 1,117 yards and 2 touchdowns. Also, in case you’re curious, the diminutive Spencer caught 101 passes for 1,496 yards and 11 touchdowns during his college career as well.

The Steelers already have a few experienced slot wide receivers with return abilities on their offseason roster in Ryan Switzer and Eli Rogers so you can see how Spencer’s path to this year’s final 53-man roster will be a tough one to navigate. Even so, he’s apparently already made several plays as a wide receiver during the team’s six OTA practices to date.

“He went yard twice today,” Craig Wolfley of steelers.com said at the conclusion of the team’s Thursday OTA practice. “And you are talking about a guy who set a Canadian record, almost 500 yards of total yards, whether it’s pass receptions, kickoff returns, punt returns, in a game. That’s huge.”

Wolfley is obviously referencing Spencer’s 2017 game against the Hamilton Tiger-Cats in which he set a single-game CFL record with 496 all-purpose yards – 169 on punt returns, 165 on kick returns, 133 receiving and 29 on a missed field-goal return. With all of the experience he’s received in the CFL the last several seasons, Spencer thinks it’s played a role in him quickly adjusting to the speed of the NFL game.

“Canada has helped me adjust to this league,” Spencer said, per the Gorman report. “Everything is slowed down now. I’m able to play faster without thinking as much. Learning the whole system up there has made this jump easier for me. The whole speed of the game is something I’m getting accustomed to but I think I’ll be fine. …

“I know who I am and what I can do. If I stay humble and stay focused, it’ll prevail and show up for itself.”

The Steelers first preseason game of 2019 will take place 10 weeks from Friday and at Heinz Field against the Tampa Bay Buccaneers and assuming Spencer is able to stay healthy and on the roster between now and then, it’s likely he’ll receive a lot of playing time in that exhibition contest as not only a returner, but as a wide receiver as well. The Steelers had a dark horse former CFL player make their 53-man roster in 2009 in the form of one Stefan Logan as he made himself uncuttable as a returner during the preseason. Can Spencer ultimately duplicate Logan’s feat a full decade later? We’ll see.

The @REDBLACKS continue to pile up the points, as Trevor Harris swings one out to Diontae Spencer, who runs it in for the 17-yard touchdown after another #Argos turnover.

Diontae Spencer returns a punt for an 88-yard touchdown for another @REDBLACKS special teams TD.

Trevor Harris connects with Diontae Spencer (@DSpencer4_) to extend the lead for the @REDBLACKS.#CFLGameDay pic.twitter.com/jarCm8WgfA

Dionte Spencer (@DSpencer4_) jukes his defender and then goes the distance for a @REDBLACKS touchdown!!#CFLGameDay pic.twitter.com/R1UjPClZR6

WOW!! What a spectacular catch by Dionte Spencer to put the @REDBLACKS into the lead!! 🔥#LiveMic #CFLGameDay pic.twitter.com/mbHJ3LBBuj

The @REDBLACKS cash in for another touchdown as Trevor Harris connects with Diontae Spencer (@DSpencer4_) in the end zone!!#CFLGameDay pic.twitter.com/XccgujTAVr

The @REDBLACKS don't waste any time on this possession as Diontae Spencer (@DSpencer4_) catches a deep pass for a 79-yard touchdown!! This is his second touchdown catch of the game!#CFLGameDay pic.twitter.com/YcJWtHG1g5

Diontae Spencer (@DSpencer4_) shows off his speed as he rushes 22 yards for a @REDBLACKS touchdown!! 🔥#GCPlayoffs #Roadtothegreycup #CFLGameDay pic.twitter.com/o6rLIqDNas

One the first play after an interception, Trevor Harris finds Diontae Spencer (@DSpencer4_) in the end zone for the third @REDBLACKS touchdown of the game!!🔥#GCPlayoffs #Roadtothegreycup #CFLGameDay pic.twitter.com/i36utaoe1Y