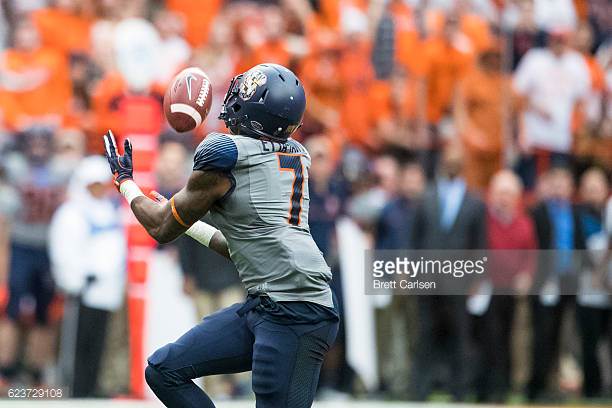 Beavers was drafted by the Minnesota Vikings in the 4th round of the 2016 draft. Hailing from Western Michigan, he made 40 consecutive college starts, including 13 at left tackle his senior year. But a lack of size and length made NFL teams see him more as a guard. Beavers struggled with the Vikings and was released at final cutdowns this year. He briefly spent time with the New England Patriots before the Vikings signed him again, only to cut him on November 14th.

Etta-Tawo was a UDFA in this year’s past draft. After spending most of his college career at Maryland, where his numbers were nothing to get excited about, he burst onto the scene in 2016 at Syracuse. There, he caught 94 passes for nearly 1500 yards and 14 touchdowns. Despite being new to the team as a grad transfer, he was elected a team captain.

However, there were questions about his ability to separate and catch the ball cleanly. Questions that weren’t aided with a disappointing Senior Bowl week where he injured his hand and struggled in practice.

Here are the brief highlights/lowlights in the scouting report I wrote on him back in February.

– Big play maker vertically who tracks the ball well, times his jumps, and shows vertical to win 50/50 balls, willing to be physical and fight for the ball
– Technical route runner vertically with the ability to stack the CB and use frame to box out

– Inconsistent hands and too many drops, doesn’t really body catch, just seems to lose focus
– Allowed to play in space as X receiver in college, often isolated, will have to learn to play in traffic in NFL
– Has to be more detailed, avoid stacking bad plays, and work back to the football underneath

A UDFA, he latched onto the Jacksonville Jaguars after the draft and went through training camp with the team. The Kansas City Chiefs picked him up in October before releasing him on November 13th.

Garrett was a big playmaker at Tulsa, averaging 16.5 yards per catch in 2015 and hauling in 95 passes. At 6’3 220, he posted impressive measurables at the 2016 Combine, running a 4.53, jumping 36.5 inches, and posting a 10’8″ in the broad. He’s spent time with Carolina since making it into the NFL. He caught one pass for seven yards in the preseason finale against Pittsburgh in 2017.

Our Josh Carney wrote him up, which you can read here. In the report, Carney called Garrett “quick, efficient off the line of scrimmage” but noted he needed to play more physical.

Torgensen, 6’3/230, rewrote the record books at Penn. As a senior in 2016, he completed more than 66.6% of his passes, tossed 17 touchdown passes and threw only four picks. In his career with the Quakers, he threw for more than 7000 yards and 52 touchdowns. His NFL.com scouting report compared him to Zac Dysert.

He spent time with the Atlanta Falcons and Washington Redskins, the latter who released him on October 3rd.

Leamon, a house at 6’6, 332 was a 2017 UDFA out of South Carolina State and blindside protector in 2016. Size is certainly what is most attractive about him and his 35 inch arms gives him a prototypical build. His scouting report praised him for his initial punch but said he lacked quickness to handle speedy edge rushers. He’s spent time with the Arizona Cardinals and New York Jets.

The Steelers wound up signing Jake Rodgers back to their practice squad in Monday as they braced for the news of Marcus Gilbert’s suspension.

While it’s fun to write and discuss about these players, it’s all common practice in the NFL. Teams update their emergency lists in case of injury. And often times, they’re targeting guys who are in the “circuit.” Which is why you see a lot of these players who were recently released. They’re in shape, know how the NFL works, and ready to go if needed.