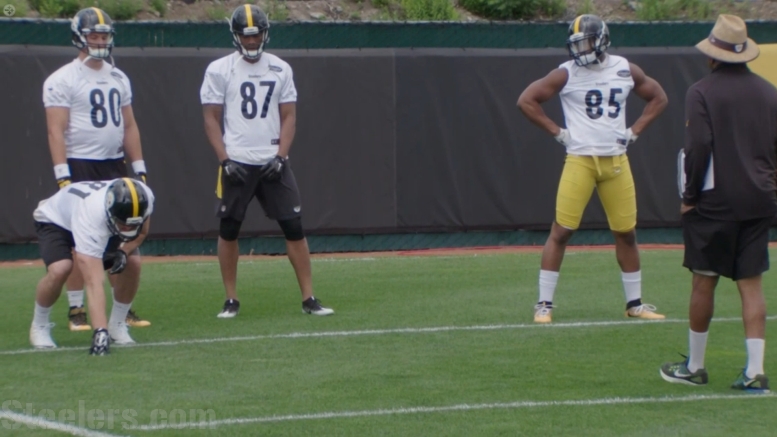 Considering that he no longer even has the prospect of eventually having access to Ladarius Green, when it comes to the difficulty of his job, Pittsburgh Steelers tight ends coach James Daniel probably realizes that he is facing one of the most difficult tasks that he has ever been asked to undertake with the team.

It didn’t hurt that the Steelers drafted Heath Miller in the first round during Daniel’s second year with the team, and it was just last season that he was finally without the former Pro Bowl talent again after over a decade of working together.

The group that he is working with now is a rather undistinguished bunch of potential overachievers, but he does feel, as he told Missi Matthews recently during an interview for the team’s website, that “we’ve got a group that’s got some talent”.

The talent starts with 2015 fifth-round draft pick Jesse James, who has served for most of the past year as the Steelers’ starting tight end, with the exception of the month and a half or so in which Green was healthy and contributing.

“They’re guys that are going to require work”, Daniel conceded while talking about his group, “but they’re all guys that seem to have a great attitude toward work”. None of them could certainly be accused of being prima donnas.

Just look at a guy like Xavier Grimble, who spent years kicking around practice squads before finally getting an opportunity to play last season. That didn’t happen because he was simply an incredible talent. That was a product of consistent hard work and dedication.

“We’re looking forward to working with them and seeing about molding them and developing them into being guys that can help this football team”, the veteran position coach said. “We’re working on the little things to try to get better doing those things”, a natural statement for a technician obsessed with the fundamentals.

While he previously talked about veteran David Johnson being the veteran of the group, he is also giving equal attention to the team’s two young rookie undrafted free agents, Scott Orndoff and the tall, receiver-like Phazahn Odom, in whom he is trying to instill a blocking mentality.

“The most important thing for us any time we’re out here practicing is better and trying to be as efficient at the position as far as carrying our weight to make the offense productive”, Daniel summarized his role in revamping a tight end group that looks dramatically different from just two and three seasons ago.

He was, in fairness, able to cobble together a respectable offensive output in terms of receiving numbers last year, though it should be noted that a healthy chunk of that came from Green, who is no longer here. Of course, progress on the blocking front is equally important, and we saw that from James and Grimble as well, with Johnson still leading the way.