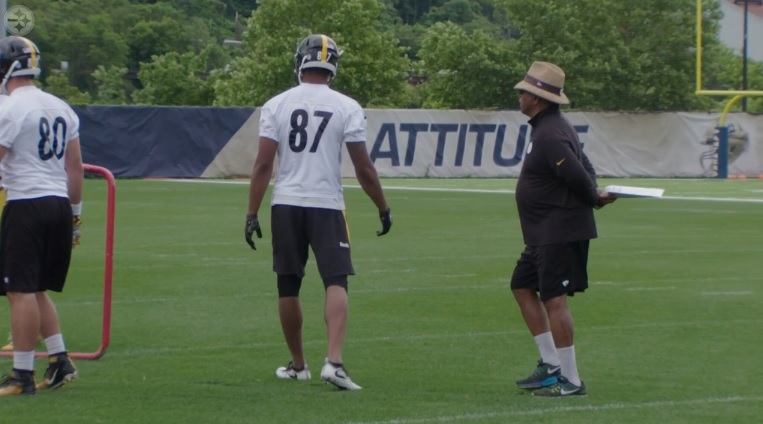 We’re happy to be teaming up with Ron Lippock to bring you exclusive player interviews throughout the offseason. First up is tight and Phazahn Odom. You might know him as the really tall tight end but there’s much more to his story as he prepares for his first NFL training camp.

Q: First, I know you’re in between OTA’s and camp. What are you doing with yourself now?

Odom: Well, I’m in New York and just took my finals – I’m happy – I did really well. I know I have rookie development soon. Then camp after that.

Q: You just wrapped up OTA’s a short while ago. What were the things you took away from there that you realized you need to work on most?

Odom: Staying low in my run blocking. More power in my legs to get more leverage, I’m taking extra time working on the agility shoot and working on the blocking bags.

Q: Who are you working with most right now on those things?

Odom: [Tight ends] Coach Daniels has been working with me. What else has he and others told you in terms of what you need to do to make the team?

Odom: That I have to make plays in the passing game if I’m going to have a serious chance, I also need to improve my run blocking and be good on special teams.

Q: Have you had a chance to speak to guys like Villanueva – tall guys who understand how to handle some of the disadvantages of being so much taller than guys like Harrison. Smaller guys that can make it tough to be a successful blocker.

Odom: Exactly, That’s right. I haven’t spoken to the other vets yet. The big thing yeah, is learning how to block given my size (6’8″). Figuring out how to block smaller guys due to my size is definitely something I need to work on and I’ll definitely talk to him when I see him.

Q: How do you work on that right now?

Odom: I’m working on keeping a flat back when I block and on my leg strength. Like I said before too – the agility shoot, and extra workouts to work on my core strength. It’s definitely harder to get leverage at my size and that’s one of the big things I need to work on.

Q: Have you bonded with any of the rookies while at OTAs?

Q: Is it hard sometimes getting close to guys – especially guys like Orndoff – that you know you’re competing against for a roster spot?

Odom: Honestly, I don’t think about it. We’re all teammates – we can compete for the same thing without negative feelings. We can compete and still be friends.

Q: So, taking a step back, you were an accomplished basketball player in high school. Why the move to football?

Odom: In high school I only played basketball and some track at first, I tried football at a young age and I got hurt. So my mom didn’t want me to jeopardize my basketball career by playing football. But the high school changed football coaches and the new coach begged me to play. I tried out and my mom wasn’t happy. But I tried my junior season and didn’t play – I was athletic but I didn’t know much about football. So, I asked the coach if I could play for the scout team and it was the most fun I had in a long time – as long as I could remember. And things took off from there.

Q: How did you make good with your mom?

Odom: She was upset. She tried to get me not to play and wouldn’t go to any practices. But the coach talked to her and promised her I’d get a scholarship. She stepped out of the way after that.

Q: So at OTAs, any joking around by the vets – they start pulling pranks on you yet? You know it’s coming…

Odom: Ha – yeah. Ben, Vince – they were joking around. AB, Shazier made it a fun atmosphere. It’s definitely coming, but nothing yet!

Q: Have the vets given you any advice that’s stuck with you – what’s the one thing after OTAS that had you most worried?

Odom: I haven’t had to make run calls before at Fordham – so that part of the playbook I’m still working on. I’m taking extra time doing so – staying up learning it. Working on the jugs machine after practice, taking care of my body. But I work with the tight ends coach individually to help learn the playbook as well and the pass concepts. In college I knew what I had to do – I didn’t think. And I know that’s what I have to do here.

Q: I spoke with Carlos Emmons recently – a seventh round pick of the Steelers some time ago. What he said helped him make the roster was learning the playbook faster than the other guys. Lots of sleepless nights, but it enabled him to read plays faster and therefore make plays faster…

Odom: Yeah – that’s a great point. He’s exactly right. Every night I’m in the playbook learning. Like the run calls. In college we had one role as a blocker. But in the NFL, the role changes if the defense gives a different look. I have to get that down. I’ve struggled a bit with that but I’m learning it more and more.

Q: Anyone you’re most anxious to test your mettle against once camp starts?

Odom: Anyone in front of me! I haven’t really thought about that yet.

Q: Anything further Coach Tomlin or Ben have said or done with you that’s helped?

Odom: Tomlin jokes with all of the players Ben has helped me with route running and working on my catching radius. You better catch all of his passes if you want to make the team!

Q: So taking another step back. Were you surprised to go undrafted? What did your agent tell you to prepare for come draft time?

Odom: I was definitely prepared, but I expected to get drafted, There was a lot of hype about me my senior year. But I didn’t have the season I hoped for. Then I had surgery on my hip in the offseason. So considering the surgery and season I had, [it wasn’t a shock].

Q: And you wind up in Pittsburgh. Why Pittsburgh?

Odom: I didn’t get any contracts after the draft. I got a few camp invites – Kansas City, the Bears, Pittsburgh and Jacksonville all invited me. I chose Pittsburgh because I thought it gave me the best opportunity.

Q: Were you surprised when Green was let go? Do you think it affects your changes greatly to make the team?

Odom: I never met him – he was never there when I was. It’s unfortunate for him – he was a great tight end and when he played he showed he could make big plays. But for me, as an individual it gives me a better shot to make the roster. We’re both big, rangy vertical threats. If I can make plays in the seam like he did it gives me a good chance to make the team.

Q: Last question. Just how excited are you to to play in your first preseason game?

Odom: I’m definitely excited for the preseason – to be able to make some plays. This is all I dreamed of.