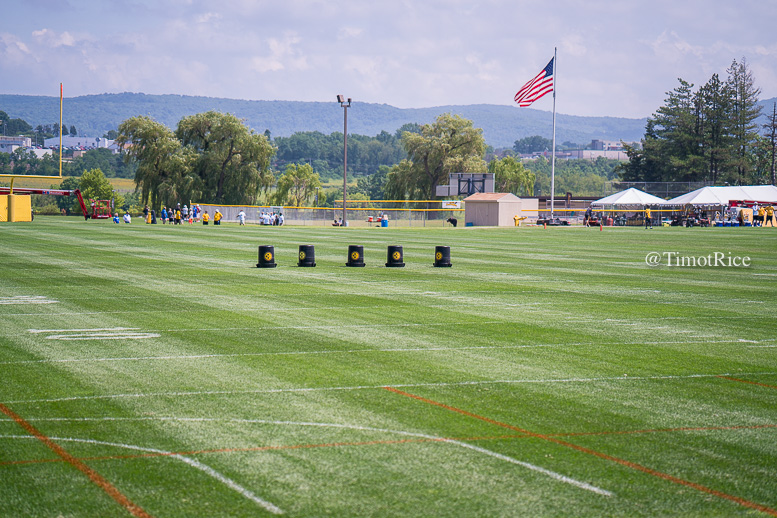 Halfway home through the preseason and the the makeup of the Pittsburgh Steelers’ 53 man roster. Here’s my third crack at it that saw changes in some important areas.

If you would like to look back at my previous attempt, you can check it out here.

Note: This list is not including Le’Veon Bell and Senquez Golson, who will be part of the initial roster before they revert to their suspension and injured reserve lists.

Analysis: The first two spots are no-brainers but the #3 gig is completely up in the air. Though Gradkowski may not be 100% for Week One, if he can get healthy within the first two or three weeks, the team may roll the dice and hold onto him. Financially, that’s a smarter choice than putting Gradkowski’s salary on IR ($885K) and signing another quarterback for probably around $1 million. It’s not like the Steelers are teeming with cap space.

So you just cross your fingers and hope Roethlisberger stays upright for the first month. Make that the entire season, for that matter.

Analysis: No changes here though we finally have a conclusion on Bell’s suspension. Richardson has done enough to play his way onto the roster, the other names no longer even remote threats to the 53, and it isn’t worth bringing in a veteran for three weeks.

Analysis: Nix will bash skulls and make tackles. Like the way fullbacks used to be.

Analysis: This is still tough because we have no clearer picture of Green’s injury situation. Unless the team decides to put him on Reserve/PUP, he’ll still count against the roster, even if he isn’t immediately available. Two healthy tight ends aren’t ideal though there is some comfort in knowing Roosevelt Nix can play there (and he saw expanded work during camp).

If Green is put on PUP, the landscape clearly changes and I think the team brings someone else in off the street. Xavier Grimble hasn’t proven enough.

Analysis: The same five I had prior to camp. No chance this group changes and there’s no compelling reason – or player – to make me want to add a sixth.

Analysis: Provided Hawkins’ shoulder isn’t anything serious, and we still have pretty much zero idea, this group remains the same.

Does anyone else have the sinking feeling Hawkins suffered a Golson-like labrum tear and the team is hiding it, letting him finish out camp before stashing him on IR? My mind keeps me up at night.

Analysis: Mixing it up here and doing something I didn’t think I would. But with Wallace’s injury and the potential they see in Finney, who has still had a pretty solid preseason, I don’t think the team wants to risk losing him.

That’s a guy you can build on in the long-term while Hubbard offers too much short-term value to send away. His camp at center and guard was solid and he’s been asked to play tackle almost exclusively in the preseason, skewing the perception of who he is.

Analysis: As long as Walton can work his way back from his literal back injury, this group is set. Caushaud Lyons hasn’t progressed enough, though he hasn’t been terrible, to push Walton off the roster.

Analysis: Chalk here. Travis Feeney being back on the field is great news but too much time lost for him to get back on the train.

Analysis: Man, this is difficult. It’s hard to argue with any of the back three, Johnson, Fort, and Tyler Matakevich. Johnson was a free agent pickup and only one signing under Kevin Colbert has failed to make the opening day roster. Fort’s play has been stellar and he’s continued to play over Matakevich so this leaves the 7th rounder as the odd man out.

Matakevich has had a nice preseason but not the can’t-miss showing some would lead you to believe.

Analysis: Group is unchanged, including the mystery free agent cornerback, who could turn out to be Keenan Lewis. If not him, I’ll post a list of names to watch along the waiver wire at cutdowns.

Analysis: I like Jordan Dangerfield but I feel like most who add him just lop him on because there aren’t any other options and they feel compelled to add someone else. His game isn’t much different than before and though the opportunity is a bit cleaner, I’m not compelled to add him. If I had to guess, the team would rather roll with the long-term potential of a guy like Finney than the limited, short-term value of Dangerfield.

Analysis: Berry has only further cemented his spot after another positive showing against the Eagles. This battle is so far over, it’s being taught in social studies’ classes.

Analysis: Have kept flip-flopping between him and Cameron Stingily. But Brown-Dukes out-snapped Stingily 14-2 against the Eagles and that’s pretty telling since he’s gotten more burn in both preseason games. It’s enough for me. Plus, I think Tomlin has a soft spot for Hyphen-Mercyhurst.

Analysis: No Demarcus Ayers? No Demarcus Ayers. I know that’s a little “out there,” and I sincerely believe Ayers has done some nice things, but if this guy was a UDFA instead of the 229th overall pick, I don’t think anyone would take issue with me leaving him off this list.

Hamilton isn’t a slot guy but has a kick return background and has flashed some playmaking ability. Blakeney is on here for the same reasons as before, a big and strong Z receiver who will serve a role on the scout team. He is, though, the closer of the two of being bumped off the roster, and I imagine it would be Ayers who replaces him.

In three of the past four drafts, one player was cut outright – Gerod Holliman, Terry Hawthorne, and Terrence Frederick.

Analysis: Grimble has done just enough to stick around. I do like some of his physicality at the line of scrimmage and his physical makeup is enough to tantalize the team into keeping him around.

Analysis: With the team keeping ten offensive linemen, there isn’t the need to keep two on the practice squad. Feiler is the best left, with guard and tackle versatility, and is one of the few not to turn into the Walking Dead during camp.

Pour one out for Quinton Schooley, Brian Mihalik, Valerian Ume-Ezeoke, and Cole Manhart.

Analysis: Just going with one defensive linemen here though I haven’t shut the door entirely on Johnny Maxey or even Devaunte Sigler. Lyons has the size and strength to keep around as a five tech.

Analysis: Last week, I wondered out loud if Feeney would even practice in camp and if he would wind up on injured reserve. The next day, I got my answer, the rookie suiting up and playing against the Eagles. That’s an obviously important step but he still has a huge ways to go in order to prove he is a viable option on the 53.

Matakevich continues to teeter on the edge but remains on the outside.

Analysis: Still rolling with Shabazz over Montell Garner, especially if the Steelers sign someone slot-capable after cutdowns. Makes Garner’s versatility less important. Shabazz continues to contest and high-point the football while being a physical presence downhill.

Dangerfield makes another pass onto the practice squad. They’ll have to remind him not to lay anyone out in practice.