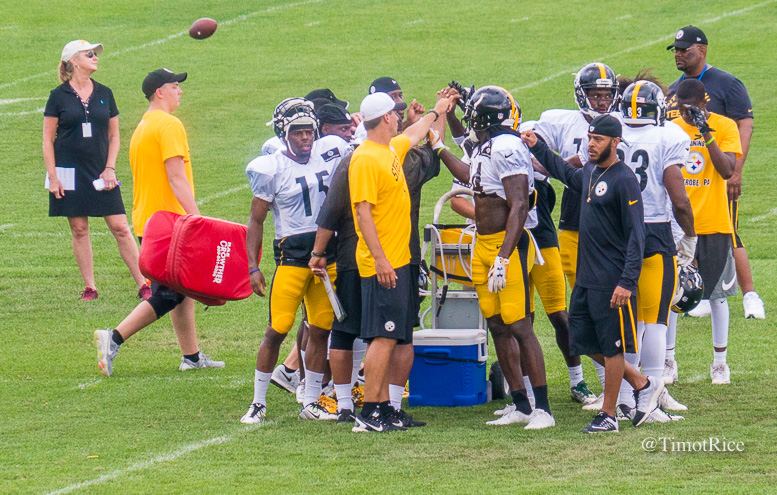 We’ve finally rolled through 11 training camp practices (and one gymnasium jam session) and our first preseason game, giving more clarity to the makeup of the Pittsburgh Steelers’ 53 man roster. Here’s my second edition of it and though there aren’t many changes, there are a couple in key areas.

If you would like to look back at my previous attempt, mash the link to it here.

Analysis: Though Mike Tomlin didn’t provide and update on Bruce Gradkowski, the QB’s comments about hearing a “pop” doesn’t make his situation sound good. And even before the injury, he was no lock to making this team. I’d love for the team to carry just two quarterbacks but believe they’ll roll with three, intrigued by Vaughan, who has shown just enough upside to warrant an extended look.

And if the team was ever in a bind and had to cut someone from the 53, Vaughan would be a sensible candidate. He may not make the roster initially but could jump on after Senquez Golson and/or Le’Veon Bell are moved to their designated spots.

Analysis: If Bell wins his appeal, we know who the three backs are. But still working under the assumption he won’t, Richardson climbs onto my list. He has had an impressive camp, by far the best burst of anyone whose spot isn’t secured and was the only Steeler to consistently provide juice to a lifeless offense Friday night.

I thought more about adding a free agent back but even in a worst case scenario, Bell is out a month. Is that worth signing a vested veteran and being invested financially for an entire season?

Analysis: Obviously, no changes here. Nix is doing his thing, crackin’ skills and chewin’ bubble game. And he’s all out of bubble gum.

Analysis: Still not making changes here though Green’s status is clearly murky. Johnson is the better blocker than Xavier Grimble and that’s more important to this offense. If Green misses, I could also see a free agency pickup. The Atlanta Falcons’ Levine Toilolo is the top name I have circled.

Analysis: No changes here and certainly no reason to make any. Rogers continues to solidify his spot and I’m not sure if there’s any scenario, injury aside, where he gets cut.

Analysis: Three o’clock and all is well. No changes to make, though Hawkins’ shoulder injury bears watching. It’s not a matter of who will make the roster but the level of competency within the group.

Analysis: The last spot between Hubbard and B.J. Finney is definitely debatable. But Hubbard’s tackle capability wins out here, knowing that Hawkins probably won’t be active on Sundays. It may not be a pretty scenario to envision him at tackle but it’s better than not having any options.

Analysis: Caushaud Lyons is still trying to keep himself relevant but Walton is ahead in the pecking order and played better against the run, while Lyons’ hand use makes him a slightly better pass rusher. For now, Walton stays.

Analysis: Nothing going on here. These two are locks and no one else is hopping on board.

Analysis: So much for an intriguing camp battle here. Sure, Chickillo didn’t have a Lawrence Taylor-performance against the Detroit Lions but there’s no one threatening his job. What he did in-game was far from terrible, too. Travis Feeney can’t even get on the field and like I wrote even before camp, could wind up going on injured reserve.

Analysis: Still keeping everything chalk here, too. Tyler Matakevich has enjoyed a nice camp, and his ability to shed blocks is an asset on special teams, but he’s still running behind everyone. Johnson and Fort have just as much special teams value. Still fluid but there’s not enough compelling evidence for me to make a switch.

Analysis: I had Donald Washington on this list but his play, or lack of it, clearly doesn’t warrant an encore appearance. With Golson shut down too, this group has suddenly gotten thin. It’s in their nature to add a free agent cornerback – Antwon Blake, Demarcus Van Dyke, B.W. Webb, and Ross Cockrell litter the list.

I’ll take a stab at three possible waiver wire names: the Carolina Panthers’ Robert McClain, the San Diego Chargers’ Steve Williams, and the Houston Texans’ Terrance Mitchell. Mitchell is the most likely to be cut though McClain is the most attractive name on this list.

Analysis: Wanted to disagree with Dave’s roster, just to mix things up, but it’s hard to make a different case and I didn’t want to use the “free agent” plug again. Dangerfield is Ross Ventrone-like in the way he attacks the game. Reckless ambition that makes him an asset on special teams. His roster spot wouldn’t be secure but he could make his first ever roster out of camp.

Analysis: So much for Will Monday providing “serious” competition, like I wrote before camp. Berry’s gig seems safe and sound.

Analysis: Tough call between Stingily and Brandon Brown-Dukes. Stingily is still crazy raw as a blocker and receiver but he does have excellent size, something Brown-Dukes will never have in his camp. You can teach and mold up everything else about Stingily’s game to a serviceable level.

Analysis: Ayers’ window of opportunity may have closed up sooner than anyone thought. Blakeney serves as a nice foil, a big, strong “Z” receiver who is raw but hey, that’s what the practice squad is for.

Analysis: Grimble went in with a whimper, not a bang, Friday night, but he did show some physicality at the line of scrimmage. Still, despite having the size, his blocking ability may not be up to snuff to warrant a spot as the #3 tight end.

Analysis: It’s rare to talk about this and not sound like a total homer but Finney may not make it to the team’s practice squad. He’s had a strong camp and played well Friday. I’m taking a chance, calling my shot with Marquardt, currently with the Lions. The Steelers got a good look at him in practice and the first game. Foot injuries early in his pro career limited him but he has the size the Steelers look for, weighing in at 6’8/4 315 pound (at his Pro Day).

With Brian Mihalik’s injury, there are no true tackles left to choose from.

Analysis: Doubling up with the defensive ends but I’m just not sure if Lavon Hooks has done enough to warrant a roster spot. For practice, in a pinch, Ricardo Mathews could do it. Lyons is on the bubble, still outside looking in, but looks the part and has active enough hands to keep developing.

Maxey is a longshot here but he has the size, length, and a whiff of athleticism that garners a longer look.

Analysis: Travis Feeney just needs to get healthy enough for a practice to warrant consideration. Like I’ve written, he’s on a path to injured reserve if he can’t get healthy. Maybe they already know he’s done, just as they did with Golson, but can’t waive/injure him and figure it’s best for him to soak in all the mental reps he can.

Serious question, has Tomlin even mentioned his name as part of the “players working back,” like he has with Bud Dupree and Artie Burns?

Matakevich certainly could hook onto the roster but he’s still on the outside. Like I said, nothing compelling enough to warrant a switch.

Analysis: It might appear that I’m slighting Montell Garner who, someone that has had a nice camp, but remember, we all thought Ian Wild, Alden Darby, and Kevin Fogg were making the roster last season. Unless Garner’s ball skills show up in-game, I’m still tempted to keep him off.

Shabazz has a better makeup and fits what the Steelers are looking for more than Garner.