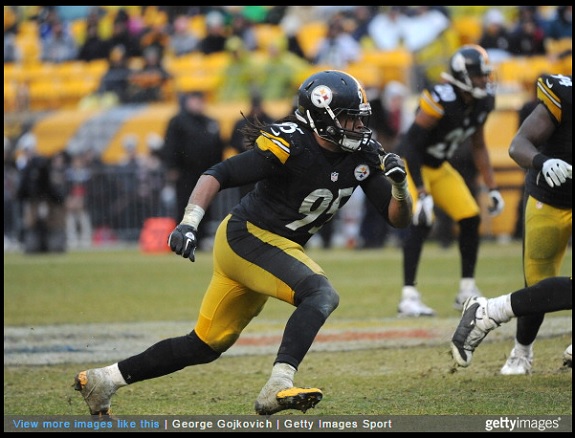 It’s quite true that Pittsburgh Steelers third-year outside linebacker Jarvis Jones had a very disappointing sophomore campaign, missing more than half of the season due to a wrist injury that landed him on the return-eligible injured reserve list during the third game.

It’s also true that that injury alone cannot wholly account for the level of disappointment that was felt with respect to the former first-round draft selection’s performance during the course of the year. He did play a bit over two and a half games before suffering the injury, and while he showed some overall improvement from his first season, he was still clearly in development.

Supporters like to point toward the fact that he recorded two sacks during those first three games, the second of which caused a fumble that the Steelers recovered and helped facilitate what became a blowout.

That certainly cannot be taken away from him. One can debate the nature and degree of difficulty of those sacks, but he earned them. What is fair to question, however, is his overall effectiveness as a pass rusher during that time, and Pro Football Focus’ charting suggests that he was less effective during that span than in his rookie year.

While fully acknowledging the potential shortcomings of the site, it is an easy barometer for comparison. In 2013, Jones accounted for 298 total rushes, generating one sack, but a total of 27 pressures, which translates to pressure on approximately 9.1 percent of rushes.

Jones rushed the passer on 52 occasions during the first three games of the 2013 season. In addition to the two sacks, however, he managed just two more hurries for four pressures in total, influencing the quarterback just 7.7 percent of the time.

Of course, this fails to paint a full portrait. Obviously it only accounts for a fraction of a season, and many pass rushers find difficulty getting into the backfield earlier in the year while gradually warming up as the season progresses. This was the case for both LaMarr Woodley and Jason Worilds.

For Jones in particular, who came off such a struggle through his rookie season, it’s unfair to ignore the fact that his injury prevented him from having the time to develop into his second year, even irrespective of the ramifications of the injury on his performance when he did return, which is the subject of yet another topic still to be accounted for.

Our newest writer, Jon Ledyard, astutely took apart a few of his pass rushes from the early part of the season, highlighting some positives and negatives, where either growth has been seen or needs to be developed.

It’s clear that Jones still has a long way to go if he should ever develop into the player he was expected to be on draft day. As highlighted above, even his pass-rushing performance in the early portion of last season when healthy was not even as proficient as in his rookie season, even if he had twice as many sacks.

But the truth is that we don’t have a sufficient sample size from which to gauge his growth, and for reasons that I will get into tomorrow, we can’t look to his late-season snaps for much in the way of supplemental data, as his injury and his usage largely discounts its informational value.