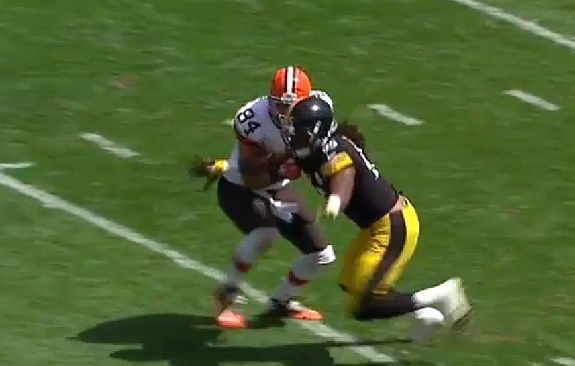 Few players on the Pittsburgh Steelers current roster have been criticized as much as outside linebacker Jarvis Jones throughout the edge rusher’s first two seasons, but how much of that negative stigma is warranted?

As the 17th overall pick in the 2013 NFL Draft, Jones was drafted largely because he was believed to be an exceptional athlete off the edge, with the ability to add the necessary muscle to hold up as a run defender as his NFL career progressed. Because of his high draft selection and the Steelers growing need for pass rushing help over the past two seasons, much has been expected of the young edge rusher, and there is no question that Jones has struggled, at least in the production area.

So what has led to the Georgia product’s statistical ineptitude? Is it a scheme or usage issue, or does Jones lack the technique and/or ability to be effective? In a two-part series, I’ll break down a few plays amongst the many I’ve watched of Jones, first focusing on the linebacker as a pass rusher, then as a run defender.

The Game: Week 1 vs. Cleveland Browns

Right away you see Jones lined up in a six technique, head up on the tight end, versus the Browns 12 personnel (2 TEs, 1 RB, 2 WRs). Jones is reading the tight end’s release while keeping his eyes in the backfield to track the direction of the ball. He does a good job of quickly using his length to work into the tight end’s frame off the snap, slowing the blocker’s progress toward his target and allowing Jones’ to stay clean against a potential block directed towards him. So many defenders possess adequate length, but fail to use it with the speed, ferocity, and placement that they should. It isn’t always a strong suit of Jones’ game, but you can see the effort to use proper technique off the snap here.

As the tight end blocks down, Jones drifts with him, maintaining the disengagement that will allow him to shed the offensive player and move to the ball as soon as he diagnoses the play. Jones alertly recognizes the fake handoff and changes direction back toward the far side of the field. Despite the Browns attempt at trickery on the double reverse fake, Jones stays disciplined and correctly tracks the football, which never leaves Brian Hoyer’s hands. From a young player, this kind of eye discipline and body control is encouraging.

There is no question that Hoyer needs to release this ball quickly, but with all his options covered, he is forced to pump and eventually eat the ball for a sack. Clearly this isn’t the most impressive sack of Jones’ football career, but I love the way he uses his right arm to keep Jordan Cameron’s block at bay, while keeping his feet moving toward the target. Granted, Cameron’s blocking isn’t going to win him any awards on this play, but Jones’ technique to take on the block with one arm and keep his frame clean is excellent. You don’t often see young players show that type of length usage, but Jones wins with it here.

It is definitely a coverage sack, but Jones ability to read the play, stay disciplined against trickery, and use his length and technique to defeat a block is encouraging.

The Game: Week 1 vs. Cleveland

Lined up in a wide technique this time, Jones and the rest of the Steelers defense is caught napping on a quick snap by Cleveland. This play highlights one of my biggest concerns with Jones as a pass rusher when watching him; his lack of a plan.

As an edge rusher, you want to have a formula of attack on passing downs, which this clearly was on 3rd-and-17. This requires a previous knowledge of your opponent, as well as a reliance on your own strengths as a pass rusher. For example, if you have a reputation for winning the edge, the opposing offensive tackle could overset to avoid giving up the corner. This opens up the opportunity for an array of counter moves inside, which the best pass rushers won’t hesitate to take advantage of. When you have worked your way inside the head of an offensive lineman, there is no end to the havoc you can wreak as a pass rusher.

Jones is very unprepared for this play however, both mentally and physically. A slow start off the snap doesn’t help him any, especially considering he’s tasked with beating the best offensive tackle in the game in Joe Thomas. Jones does try a half-hearted outside-in move, but his right-footed stab doesn’t fool Thomas, who positions perfectly to keep the Steelers linebacker from slipping inside. Thomas’ punch actually partially misses (see his left hand fly past Jones right shoulder), but Jones simply isn’t strong enough to work through Thomas right hand to the quarterback.

Lesson #1: Have a plan as a pass rusher.

Lesson #2: Use your hands to avoid getting caught by pass protectors. Thomas actually missed with one hand here, and had Jones used his paws to knock the Cleveland lineman off balance, the results could have been different.

Lesson #3: You have to get stronger if you want to tangle with the big boys. Jones’ lack of power is cited often by tape gurus, and with good reason. He struggles far too often to win with raw strength, and doesn’t have the bend or quickness to win the edge consistently enough to compensate.

The Game: Week 3 vs. Carolina Panthers

Jones and Jason Worilds combine for a twist off the left side here, which Jones attacks with ferocity, hoping to bull rush the unsuspecting left guard. Again we see a substantial lack of power, as despite catching the lineman off balance, Jones fails to deliver the type of blow that would finish the job. The initial push is good, but because Jones doesn’t carry enough sustained power at the POA, the guard is able to reset quickly against the rush and avoid giving up pressure.

The reason I showed this play is because I wanted to see how Jones would fare with some trickery to aid him, as the twist should put him in a more advantageous situation to win despite his lack of power. Still the issue remained, which is definitely cause for concern.

Jones’ strength issues aside, he does show some good burst at times as a pass rusher. For how little Jones was asked to tee off as a blitzer, the third-year player flashed a strong first step, while showing the desired energy and physicality at the POA. His hand placement and usage is still too inconsistent, and he may never be powerful enough to win against top-tier offensive tackles, but had he been asked to rush the passer more in certain games rather than dropping into coverage (see the Carolina game), the results could have been more favorable for the Steelers edge rusher heading into his third season.

Jones as a pass rusher is far from a finished art, and that is positively worrisome at this point in his career. There is no doubt that he still offers upside and has made some strides from a cerebral standpoint since 2013, but injuries and too much work in coverage has hampered his development. I understand the Steelers desire to utilize his athleticism in the open field, but for a team that needs to find a way to consistently pressure the quarterback in 2015, they would be wise to allow Jones to focus his efforts primarily in that area on passing downs. That is, after all, what he was drafted for in the first place.