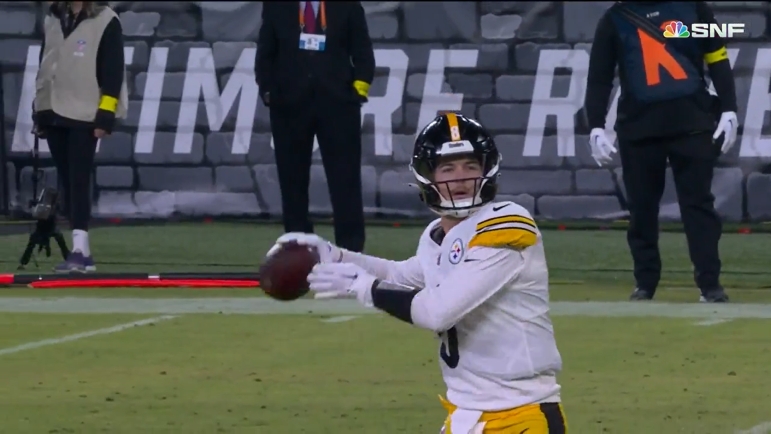 The Pittsburgh Steelers pulled off another win in stunning fashion Sunday night against the AFC North rival Baltimore Ravens, winning by a score of 16-13. Pittsburgh’s offense was largely ineffective throughout this contest in terms of putting points on the board until the team’s final drive in the fourth quarter where the drove 80 yards on 11 plays with QB Kenny Pickett finishing the drive with a perfect pass to RB Najee Harris in the end zone for the go-ahead score.

Pickett was asked by the media Wednesday if he would have similar results to those final two drives against the Ravens and Raiders if he was allowed to throw the ball more to start the game. Pickett responded, commending the rushing attack that the Steelers have had in recent weeks as well as the need to convert in the red zone more to potentially lead to more pass attempts in the future.

“I think we were running the ball really well; we want to obviously have that balance,” Pickett said to the media Wednesday according to the official team transcript. “I think that’s what’s helped us continue to move the ball really well. We’ve got to get better in the red zone like we’ve been saying. Feeling like a broken record there, but it’s something that we’ve got to continue to chip away at. As long as we have that balance, I feel like we’ll continue to move the ball and we’ve just got to finish down the red. So, that’s going to be a focus.”

Pickett has a point when saying that the Steelers’ running game has been impressive since the bye, rushing for over 100 yards in every contest but one while having the likes of Najee Harris, Jaylen Warren and even Benny Snell Jr. carry the ball well when called upon. Harris ran like a man possessed Sunday night in Baltimore as the offensive line got a great push off the ball, resulting in the team getting 198 yards against the Ravens, the most they have allowed in nearly a decade.

Steelers 198 yards rushing tonight was the most they've had against the Ravens since 1997. #Steelers

The old saying goes, “If it ain’t broke, don’t fix it.” That same saying applies to the Steelers and their recipe for winning in the second half of the season. Run the ball. Play good defense. Don’t turn the football over. With Pickett at the helm, Pittsburgh has done just that, going 6-2 since the bye week. If anything, the offense does need to improve converting in the red zone which Pickett has mentioned has been a constant talking point all season.

Still, while it would be interesting to see what Kenny Pickett would be able to do if he was the focal point of the offense, he is in the perfect position as a rookie. He has a solid run game and a gritty defense to lean on as he continued to develop and show us moments like he did Sunday night. With time, perhaps Pickett’s pass attempts per game will increase, but for now, overall improvement in the red zone should be the offense’s #1 objective.