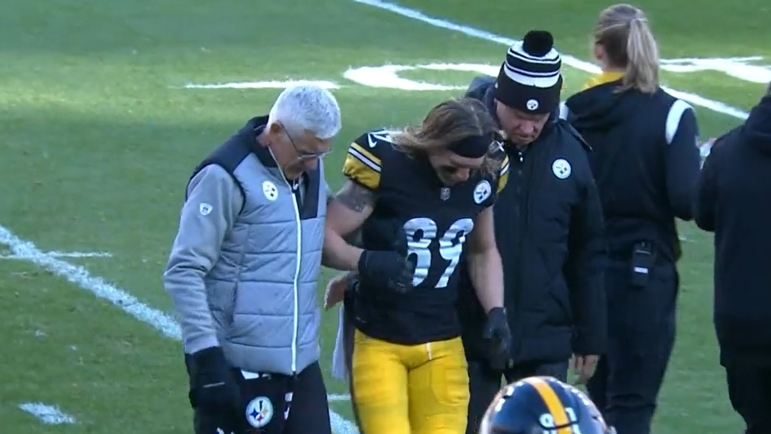 UPDATE: Freiermuth is OUT for the rest of the game with a knee injury, per Lauten.

#Steelers TE Pat Freiermuth sustained a knee injury and is OUT for the remainder of today's game.

Pittsburgh Steelers tight end Pat Freiermuth was seen down and holding his knee in pain. He was attended to by trainers on the field and limped off the field with help. Freiermuth is obviously a key piece to the Pittsburgh defense, and hopefully, his injury isn’t as serious as it appeared to be. He’s already missed a game this year due to a concussion, and ideally, he’ll avoid more missed time, but the injury appeared to be serious. We’ll keep you updated on Freiermuth’s status.

UPDATE: Cole has returned to the game.

Mason Cole was seen limping off the field after the Cleveland Browns’ third down sack of Kenny Pickett in the third quarter. Cole has been a steady presence at center for Pittsburgh this season, and losing him at this point in the season would definitely be a negative for the Steelers. Hopefully, Cole is ok, and we’ll keep you updated on his status.

UPDATE: Per Burt Lauten, Olszewski is doubtful to return with a knee injury.

#Steelers WR Gunner Olszewski sustained a knee injury and is doubtful to return to today's game.

After a third down jet sweep run for a first down by WR Gunner Olszewski, he went down and clutched his knee and began to limp off the field. He was helped off the field by trainers and had a noticeable limp as he headed to the sidelines flanked by medical personnel. It appeared. to be a knee injury of some sort for Olszewski, who’s functioned as a slot receiver for the Steelers this season along with Steven Sims. We’ll keep you updated on Olszewski’s status as we learn more.