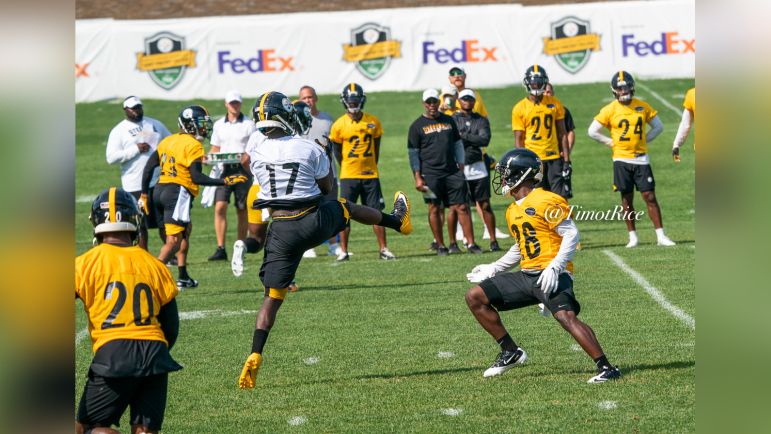 Several former Pittsburgh Steelers will continue their professional hopes in the XFL. The league held its supplemental draft today to round out their rosters for the upcoming season with six ex-Steelers being selected. They are:

That’s in addition to the long list of former Steelers selected during the league’s main draft two months ago.

The league shared its results Sunday evening after their day-long draft concluded. Rogers was the highest ex-Steeler taken, picked 6th overall and the only first-round selection.

Formerly undrafted out of Louisville, Rogers carved out a niche role as the Steelers’ slot receiver primarily in 2016. Over three years with the team, he caught 78 passes for 822 yards and four touchdowns while also seeing work as the team’s punt returner. Perhaps Rogers’ career is best remembered for this great catch against the Baltimore Ravens that led to Antonio Brown’s Immaculate Extension.

On the day of a Steelers – Ravens game, this clutch catch from Rogers on the game-winning drive will always be what I remember him for.

Love that Big Ben jumps with him to make the catch. #Steelers https://t.co/rbf9Y1zSGa pic.twitter.com/19x1uGBPT3

But his career took a massive hit when he tore his ACL in the 2017-2018 Divisional Playoff Game against the Jacksonville Jaguars. He returned late in 2018 and played in a handful of games. He was part of the XFL’s initial return with the D.C. Defenders in 2020 but the league suspended operations in March due to the COVID pandemic. He briefly spent time in the CFL and now will try to again pick up in the XFL.

Feeney was the Steelers’ sixth-round pick in 2016. Long and lanky with medical concerns, he never played in a regular season game for the team or any other NFL club for that matter. Since, he’s spent time in the AAF and CFL.

Scales, an undrafted off-ball linebacker out of Rutgers, saw a handful of snaps with the Steelers in 2020 and 2021. He appeared in five games across that span, logging 44 total snaps, 41 of which came on defense. He was in the NFL as recently as November but was released by the Cincinnati Bengals. The Supplemental Draft provided an opportunity for teams and players who weren’t eligible for the initial draft in mid-November. Scales is one example.

Scott was with the Steelers as recently as earlier this season, logging defensive snaps in Weeks 1 and 2 with the team. Released in September, he spent time with Carolina but was released in early November. He’s an undrafted free agent who began his career with the Green Bay Packers.

It appears former Steelers’ defensive back Sean Davis, the biggest name of the list, is being moved to linebacker. A big safety and second-round pick out of Maryland, he started 42 games for the Steelers, recording 259 tackles and picking off five passes. He played for a handful of NFL teams outside of Pittsburgh but never stuck and hasn’t appeared in a game this season. He’ll use the XFL as a path back in.

Vaughns briefly shined in the summer but failed to make the 53-man roster and was surprisingly not signed back to the practice squad. He’s a former undrafted free agent out of USC.

Notable non-Steelers selected include WR Josh Gordon, WR Hakeem Butler and RB De’Veon Smith. Smith was a RB for the USFL Pittsburgh Maulers infamously released after a dispute over a slice of pizza.

The XFL will have its first game back on February 18th.