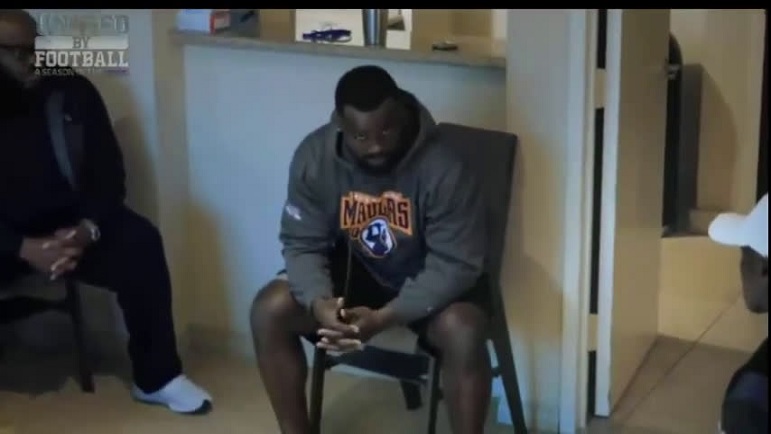 There’s an old adage “there are two sides to every story,” and that rings true in many facets of everyday life. However, in this instance, the only side that mattered was the one told to new Pittsburgh Maulers’ head coach Kirby Wilson. Wilson’s name should sound familiar to Steelers fans, being that he previously served as the team’s running backs coach from 2007 through 2013. Now the leader of his own team with the upstart USFL Maulers, it’s blatantly clear that he brought that same lunch pail, no-nonsense approach that was ingrained in him from his time in Pittsburgh.

Over the weekend, which also coincided with the league’s debut, video surfaced of Maulers’ running back De’Veon Smith being given his walking papers by Wilson after violating the team’s conduct policy. Smith reportedly was disrespectful towards a kitchen staff member in asking for pizza instead of the chicken salad that was originally offered.

Here’s a clip of the interaction of Smith’s release.

Bro got cut by a USFL team for ordering pizza instead of a chicken salad??? lmaoooo pic.twitter.com/Vo7n7HD0PU

“Well, he crossed the line, so we had to deal with it,” said Wilson, according to the first episode of United by Football: A Season in the USFL. “This is very difficult for me as a head coach, my first time. But we have a business, this is business and you’re a businessman, we all are. That’s the nature of the beast right now. But when I first talked to you guys on March 22, I had a handbook and I covered some items that were very important to me.”

Wilson then very sternly goes into detail regarding the section of that handbook which covers Smith’s violation, citing a zero tolerance policy regarding disrespect to staff members, be it team staff, any USFL staff, or even hotel members.

“It’s been brought to my attention that has occurred with you,” Wilson said. “So unfortunately, at the cost of doing business, I’m gonna have to let you go.”

Smith then goes into full-defense mode, stating nothing he did was said or meant to be taken with any type of ill will.

His side of the story fell on deaf ears though, as Wilson, who appears to very much be a disciplinarian-style head coach, told Smith the matter was done, case closed.

“Someone’s hurt feelings are a distant second to the greater good of the team, and we’ve moved on and turned that page and I’m happy we did it,” Wilson said.

It seems a bit bogus to be making such news waves out of something that, on the surface, appears very small. Smith still maintains his innocence, as evidenced by recent tweets by him.

Smith, obviously disappointed, was a standout runner for the Michigan Wolverines and recently starred for the reboot of the XFL, leading the entire league with 365 yards before the league ceased operations. One team’s trash is another’s treasure so it would come as no surprise if Smith is playing again, sooner rather than later, for another rival USFL club.

UPDATE (6:06 PM): The Maulers’ Twitter account released a statement on the story, indicating Smith had violated team rules multiple times. They end by noting Smith has apologized to Kirby Wilson and asked to be reinstated to the team.

Pittsburgh Maulers statement on De’Veon Smith being cut from the the team on ‘United by Football’. pic.twitter.com/OHmj2vuQTo

UPDATE (6:12 PM): Smith has tweeted a response of his own, implying he didn’t break any team rules. It’s safe to say no matter what happened, he probably won’t be rejoining the team.

What rules did I break? Now your lying on my name????? Say less https://t.co/NsfnidUZoe

They really just put out a lie! Y’all really should be ashamed of y’all selves! https://t.co/NsfnidUZoe

I was never made aware that I violated any team rules, let alone 3 in a 24hr span. I never disrespected anyone. Coach Kirby and I spoke after being released. In that talk, he said that he’d certainly vouch for my character.