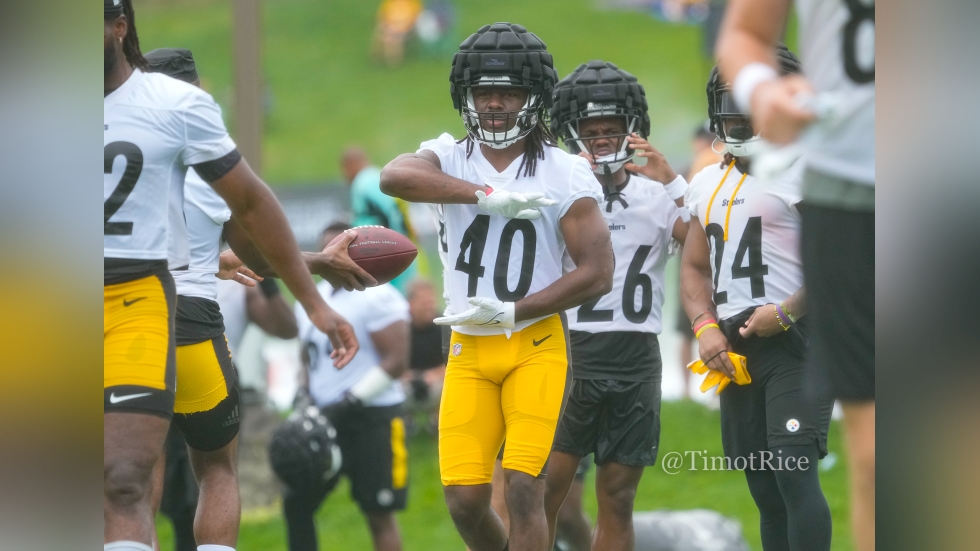 Well over a dozen former Pittsburgh Steelers’ players were selected on Day One of the 2022 XFL Draft as the league restarts following the 2020 COVID pandemic. The first Steeler taken was easily the most notable, WR Martavis Bryant, selected 5th overall by the Vegas Vipers, a team coached by former Steeler Rod Woodson. Bryant was drafted by the Steelers in the fourth round of the 2014 draft, briefly flourishing in Pittsburgh before multiple suspensions ended his NFL days.

But Bryant wasn’t the only one to call the XFL home. In a draft divided up by offense/defense and skill positions, 13 other players who spent time in Pittsburgh were selected. Separated by offense and defense, they are (and a hat tip to Depot writer Joe Clark for combing through the list).

An undrafted free agent out of Duke who spent this past summer with the team. A speedy back who ran sub-4.4 at his Blue Devils Pro Day, one then-GM Kevin Colbert attended, Durant struggled in camp and wasn’t an asset in pass protection while fumbling in the preseason. He didn’t make it to final cutdowns.

A late camp-add after suffering several injuries at running back, Borghi was a small footnote on the summer. He stuck around until late in the summer but had no path to making the team and only played a handful of offensive snaps in the preseason. He went undrafted out of Washington State in 2022.

A bigger “name” on the list, Ballage was on the team’s 53-man roster all of last year. But he carried the ball just 12 times for 36 yards and offered little on offense or on special teams. A former 4th round pick in 2018, his odds of returning to the NFL appear slim.

A tight end that was a Steeler for only the briefest of moments, signed to the practice squad in September of 2019 and released weeks later. A 7th round pick of the New Orleans Saints, he’s an answer to a very boring and obscure Steelers’ trivia question. Mack spent this summer with the Green Bay Packers before getting hurt and will try to use the XFL to pave his way back into the league.

A speedy receiver from one of the “Directional Michigan” schools – Eastern Michigan – he spent time in training camp with the Steelers in 2021. Despite making plays in the return game, he got squeezed out thanks to costly fumbles in the punt return game and was released during final cutdowns. He’s yet to appear in a NFL regular season game. Best remembered for annoyingly having just one “T” in his first name.

A height/weight/speed guy schools like Penn State consistently churn out, Blacknall yo-yo’d on and off the Steelers roster in 2020. He was cut for good during the 2020 cutdowns. He’s been out of the NFL since but I could see his athletic traits playing well in this upstart league. Don’t be shocked if he catches a 50+ yard TD early in the season.

One of the few Steelers’ draft picks on this list, Brooks was a 6th round selection out of Maryland back in 2020. He battled injuries and position fit. For a brief couple of days, he ran as a starting slot corner in the summer of 2021 as the team toyed with Mike Hilton replacements. But an injury ended his time in Pittsburgh. He got healthy and scooped up by the LA Rams, seeing a handful of snaps and winning a Super Bowl ring while on the team’s practice squad. So it hasn’t been all bad for him.

Signed to the Steelers’ practice squad in October of 2021, he also spent time with the team this summer during training camp. A corner with the hips of a safety, he didn’t play well and had no chance to making the 53. Stephens was waived at final cutdowns. It was a minor surprise he even lasted that long.

Myres staying local after playing his college ball for the Houston Cougars. Undrafted and signed by the Steelers after the 2019 draft, he was an intriguing player but dealt with injury and illness in his two years with the team. Signed by the Colts in the offseason, he only made it to the first wave of cuts being getting his pink slip.

Once a popular UDFA sleeper in 2021, Brown was a ballhawking corner who seemed like he could play in the slot. But his play never lived up to the hype and his time with the team was relatively quiet. He’s played for four teams since, including the USFL’s Pittsburgh Maulers, before seeing time with Tennessee this summer.

Don’t feel any shame for not realizing Coatney was once a Steeler. An undrafted free agent in 2020, he was released in early August. In a pandemic year with no fans to even observe him, information on him is light. Since the Steelers, he’s also spent time with the San Francisco 49ers but has been out of the league for over a year.

A veteran with a fair amount of NFL experience, Costin was a late add to the Steelers’ 90-man roster. He batted down a couple of passes at practice but didn’t even make it to final cutdowns. Most of his NFL career is known for his time in Jacksonville.

Another camp darling, Skipper was a feel-good story but was claimed off waivers by the New York Giants when the Steelers surprisingly released him in 2019. Since, he’s made two more stints with Pittsburgh, including this past summer, but he hasn’t stuck. Skipper has a half-sack in his career.

UPDATE (8:16 PM): The league is rounding out the draft with the offensive line. So far, 2022 UDFA Chris Owens has been selected by the Seattle Sea Dragons. We’ll continue our tally of ex-Steelers below.

Frazier was a seventh-round pick by the Steelers in the 2018 NFL Draft as a defensive lineman, but it appears he has switched positions and his now an offensive lineman. He was waived before the start of the season, latching on with the Detroit Lions but has yet to play an NFL game. The Alabama product had announced his retirement in 2019, after a stint with the Birmingham Iron of the Alliance of American Football, but he will clearly give things another shot in the XFL.

The XFL will hold Day Two of its draft tomorrow, drafting specialists before having eleven “open rounds” where teams can draft any position.