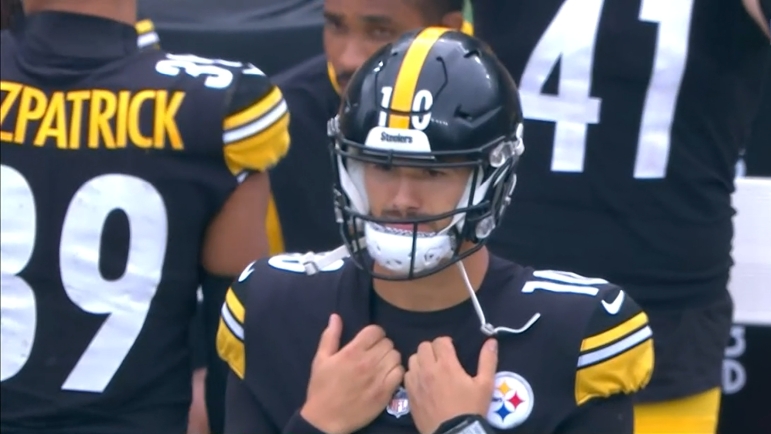 Entering free agency for the second straight year, veteran quarterback Mitch Trubisky — the No. 2 overall pick in the 2017 NFL Draft — somehow went from an afterthought in 2021 before signing a deal to be the backup to Josh Allen in Buffalo into one of the most highly sought-after signal callers in free agency entering the 2022 season.

He did that despite playing less than 50 snaps in Buffalo in 2021 behind Allen and under the watchful eye of former Bills offensive coordinator and current New York Giants head coach Brian Daboll.

Leading up to the start of free agency, rumors were flying that Trubisky could get more than $15 million a season in a relatively weak free agency class at the quarterback position, yet on the first official day of the legal tampering period, Trubisky signed a two-year, $14 million deal that could reach $27 million based on incentives.

Trubisky appeared to be landing in an ideal situation with the Steelers, who were transitioning out of the Ben Roethlisberger era after the future Hall of Famer retired after 18 seasons in the NFL. Then, a little over a month later, the Steelers selected quarterback Kenny Pickett in the first round of the 2022 NFL Draft at No. 20 overall, putting some external pressure on Trubisky.

Though he was named the starting quarterback to open the season, as well as a team captain, Trubisky lasted all of three and a half games before being benched for Pickett at halftime of the Week 4 loss to the New York Jets. Since then, Trubisky has had to come on in relief of Pickett due to injury in Week 6 against the Tampa Bay Buccaneers and Week 14 against the Baltimore Ravens, before then starting Week 15 on the road against the Carolina Panthers.

Just some Mitch Trubisky throws for your timeline. #Steelers pic.twitter.com/5bsH9mR2PI

It hasn’t been the type of season Trubisky was hoping for when he landed with the stable, consistent franchise in free agency.

In hindsight, Trubisky wishes he would have taken more time in free agency, done more research and not signed a deal on the first day of free agency, he stated to ESPN’s Brooke Pryor.

“Everything happened kind of quick,” Trubisky told ESPN recently. “I didn’t really have a long time to think of the decision. I wish I would’ve taken some more time and not just signed the first day of free agency. Looking back on it, just try to do some more research. But I felt like they were interested. I felt like it was a good opportunity to possibly get back on the field, but nothing’s guaranteed.”

Everything did happen rather quickly for Trubisky and the Steelers, who were largely considered an option for Trubisky in free agency, but mostly unrealistic if he was commanding the type of money that was reported leading up to free agency.

Man, this was a great OT throw by Mitch Trubisky to Pat Freiermuth. I don't know how he even knew he was there. Looking left, quickly darts his eyes right, squares his shoulders, and makes a really good throw. #Steelers pic.twitter.com/RYehf3a2xG

That all went out the window on March 14 when the former No. 2 overall pick inked a deal with the Steelers and then-GM Kevin Colbert, giving Mike Tomlin an experienced, pedigree quarterback to work with in the transition from the Roethlisberger era. Most importantly, Trubisky had quarterback mobility and knew how to win games in the NFL.

Then, of course, Pickett fell into their laps in the first round of the 2022 NFL Draft and they couldn’t pass on their guy.

How things were handled throughout the offseason and then into the season for Trubisky — getting all of the first-team reps and being named a starter and team captain — just to have the plug pulled at halftime of Week 4 had to be rather frustrating and has likely lead to him having a bit of a negative few on his time in the Steel City. It doesn’t help that he was never the fans’ choice at quarterback either, always dealing with the calls for Pickett, even two throws into training camp.

Definitely want to see more of this from Mitch Trubisky. That's a seed on the run to Diontae Johnson for the first down. Ball explodes out of his hands. Great accuracy on the move. #Steelers pic.twitter.com/K9TioIbOB1

That’s why his comments are so interesting overall. Nobody forced him to sign that deal on the first day of free agency. I’m sure it was rather hard for him to pass on that type of money from a stable organization with a clear path to a starting job, but it would have been smarter for him to truly weigh his options overall, which included potentially following Daboll to New York to compete against Daniel Jones.

Instead, he signed the deal quickly with the Steelers despite not doing as much research as he felt comfortable with.

Now, as the backup in Pittsburgh, nothing remains guaranteed. Though under contract with Pittsburgh for the 2023 season for $10.625 million counting against the cap, the Steelers could cut him and save $8 million, carrying just a $2.265 million dead cap hit for 2023.

Of course, the Steelers won’t have another quarterback under contract besides Pickett should they do that, so who knows what new GM Omar Khan and assistant GM Andy Weidl do at the position this offseason.

It’s very clear it’s Pickett’s team now and moving forward, with puts Trubisky in a less than ideal spot. Hindsight can always be 20/20, and for Trubisky he’s still left wondering if he made the right decision in the offseason.