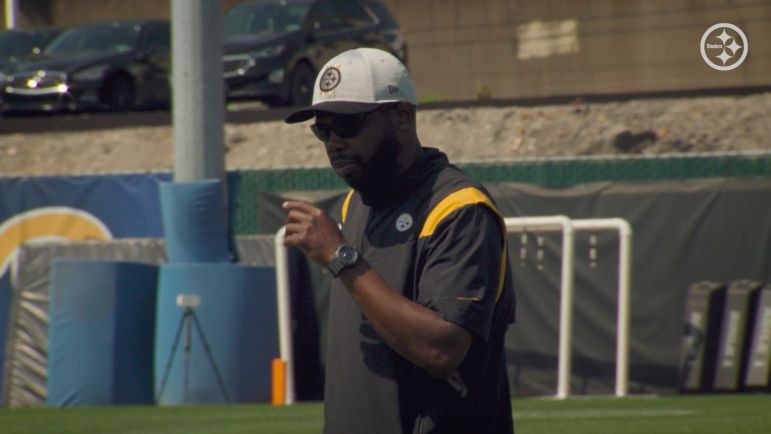 Not in Pittsburgh. Those are firmly established. But in the one thing he doesn’t have. A coaching tree. We can debate how relevant or important it is but it’s a fact that since being hired in 2007, Tomlin doesn’t have much of a tree. Sure, if you squint enough you can come up with a couple of names. Harold Goodwin, Scottie Montgomery, and there’s a long list of ex-players who moved into coaching roles: Larry Foote, Byron Leftwich, Deshea Townsend, Nick Eason. Still, it looks like the Charlie Brown Christmas Tree more than anything else.

But in the traditional sense, the assistant coach hired young by Tomlin who rose up the ranks, Tomlin doesn’t have that. Until now. Defensive backs coach Grady Brown might be that guy.

Hired in 2021, Brown’s apparently earned recognition around the league. He’ll serve as defensive coordinator for the Senior Bowl’s National Team in a couple of weeks. The Senior Bowl changed how they hire coaches for the event. Instead of bringing staffs from an entire team, they’re individually selecting each coach across the league and they largely reflect up-and-coming names, a chance for those guys to work in ascending coaching roles. Luke Getsy and Patrick Graham, two respected NFL coordinators, will be head coaches while Brown will serve as a coordinator. Just two years in the league and really one year running a room by himself and he’s already getting a chance like this. With Teryl Austin bumped up to DC, Brown admitted before the year began he had a larger presence in the Steelers’ room.

“There is more responsibility on my shoulders, certainly,” he told Missi Matthews in June.

When Tomlin hired Brown in 2021, he was an NFL unknown. A college journeyman, Brown has been hired by a long list of schools, everything ranging from LSU and South Carolina to Old Dominion and Texas Southern. In fact, he spent just five literal days at the University of Houston before being hired by the Steelers. At the time, even his cornerback room hadn’t heard of the guy.

But the secondary has played well. That’s not all on Brown. Players make plays and the Steelers have a good coaching staff full of secondary-minded coaches in Mike Tomlin and Teryl Austin. But Pittsburgh picked off 20 passes this year, tied for the league lead, with 18 of those coming from the secondary. Despite missing 75% of its starters in Week 6 against Tom Brady, Pittsburgh’s kryptonite, the rag-tag group of James Pierre, Josh Jackson, Elijah Riley and others to lead an upset victory. Cam Sutton and Levi Wallace played well, especially in the second half of the season, putting Sutton in line for a big payday.

Though we don’t often hear from Brown, his players spoke about the mindset he brings on a daily basis. Wallace credited Brown for cultivating the team’s turnover mindset.

“That’s something that goes to our DB Coach, [Grady Brown],” Wallace said last September. “Just emphasizing when we first got here back in OTAs that we just can’t miss the easy ones for sure. And then we have to take the ball away. Not just turnovers but take the ball away…I think the defense did a great job of that.”

Brown looks near-certain to return as the Steelers’ secondary coach for 2023. In all likelihood, he’s not been in the league long enough to earn coordinator looks this cycle. But this opportunity in the Senior Bowl means the NFL is taking notice of the job he’s doing. While he’ll have the benefit of closely working with these prospects, something the Steelers haven’t had in decades (the last time they coached the Senior Bowl was 2001, drafting attendee LB Kendrell Bell in the second round), Brown will also have the chance to make connections with the rest of the NFL. Events like the Senior Bowl, Shrine Bowl, and certainly the NFL combine are about hobnobbing with the rest of the league as anything else.

If the Steelers’ secondary has another fine season in 2023, it wouldn’t be shocking at all for Brown to receive defensive coordinator interest. For one of the few times under Tomlin, Pittsburgh may feel the downside to hiring the young unknown coach. The good ones don’t stay unknown for long and they often leave as quickly as they come. But the seeds have been planted and by this time next year, Tomlin’s tree could have its first true branch.