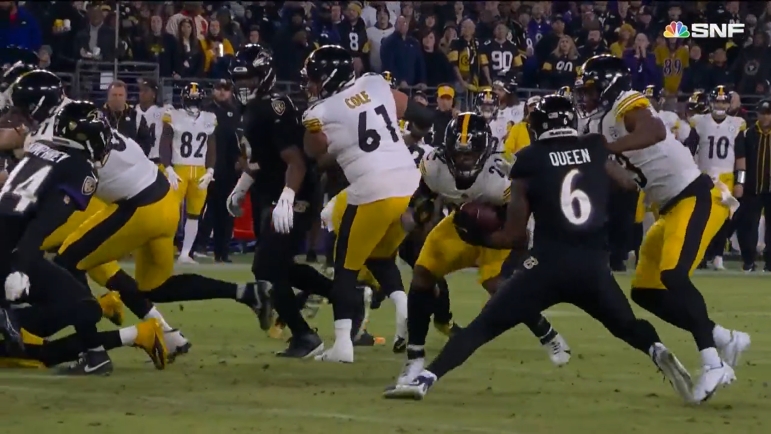 For the Pittsburgh Steelers in 2022, it’s been a tale of two halves of the season, if you will.

Early on in the 2022 season, nothing really went right for the black and gold. Pittsburgh couldn’t do much offensively, including running the football and throwing it consistently. Defensively, Pittsburgh couldn’t get off the field late in games without T.J. Watt and wasn’t taking the football away like they did in the Week 1 win over the Cincinnati Bengals on the road.

All of that led to a 2-6 record entering the Week 9 bye week.

Coming out of that much-needed brief hiatus, the Steelers are a completely different team. Playing a weaker schedule in the second half of the season has certainly helped, but so too has the Steelers finding their game overall on both sides of the football.

With the defense back to playing championship-caliber football in recent weeks, and a rookie quarterback making NFL history by authoring back-to-back game-winning drives in the final minutes in wins over the Las Vegas Raiders and Baltimore Ravens drawing much of the attention, it’s taken some of the positive attention off of a Steelers offensive line that has made significant strides since the Week 9 bye.

What a rep by LT Dan Moore Jr. Down block to completely displace #97. And then sets his hips to cut off the LB. Creates the hole by himself for Najee Harris on this good gainer. #Steelers pic.twitter.com/IUsqelnOIN

Since the Week 9 bye, the Steelers are averaging 141.8 rushing yards per game on the ground, a significant increase from the early-season struggles in the run game for Pittsburgh, which needed a new-look offensive line to gel under first-year position coach Pat Meyer.

That gelling is seemingly complete, and the offensive line has kicked it into high gear, taking over games at times in the second half of the season as the Steelers rebounded from 2-6 and 3-7 to get to 8-8 entering Week 18 with a chance to get into the playoffs.

For center Mason Cole, who was named the Steelers’ recipient of ‘The Chief’ award for 2022, which was established in honor of Steelers’ founder, Arthur J. Rooney, Sr., and is presented annually by the Pittsburgh Chapter of Pro Football Writers of America to a member of the Steelers’ organization that best exemplifies the spirit of cooperation with the media that he embodied, that second half of the season success from the offensive line isn’t due to any significant changes.

Instead, it has just come down to the Steelers executing better, the veteran center said to Steelers.com’s Dale Lolley Friday in a one-on-one interview for the team’s website.

“I think we’re just, in terms of execution, I think we’re just executing better. The plays really haven’t changed. We just were executing our blocks better,” Cole said to Lolley, according to video via Steelers.com. “Najee [Harris] and Jaylen [Warren] and Benny [Snell Jr.] and all of our backs have been running really, really well. And so hats off to them, but I think we just understood at a point in time in the season that we’re gonna have to run the ball efficiently to have it be a successful offense.

“Once we started doing that, running the ball well, I think we’ve seen how explosive and efficient our offense can be and just control games. And I think we’ve done, for the most part, a pretty good job, at least in the second half of the season.”

Execution has occurred at a high level for the Steelers’ offensive line in the run game since the Week 9 bye.

Since the bye week, the Steelers’ rushing output has been rather impressive. In the eight games, the Steelers have put up performances of 217, 172, 154, 156 and then the 198-yard performance against the Baltimore Ravens on Sunday Night Football in Week 17.

After struggling to run the football early in the season, the offensive line that was much-maligned throughout the offseason, training camp and preseason, has gelled nicely in the second half of the season.

The interior of the offensive line featuring Kevin Dotson, Cole and James Daniels has started to take over games at the point of attack in the run game, opening up significant holes for Harris and Warren, which has allowed the Steelers to stay balanced offensively, control the football and wear defenses down.

That was never more evident than on Sunday Night Football in a must-win game for the Steelers. Right away, Pittsburgh came out and punched the Ravens in the mouth in the ground game, running the football consistently downhill time and time again, providing serious balance offensively in the eventual three-point win.