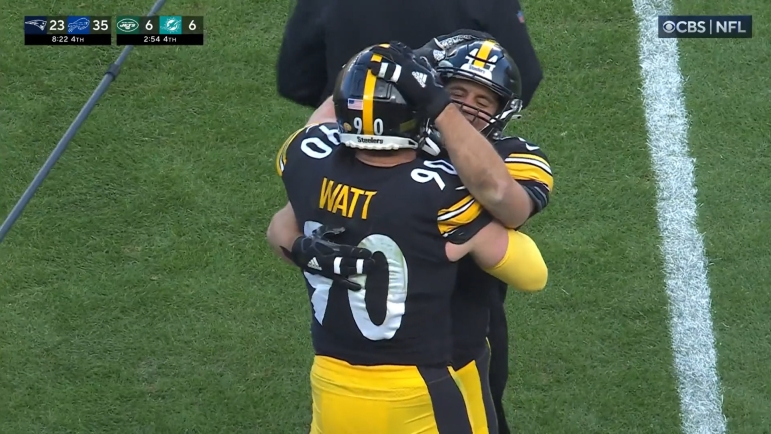 When it comes to the NFL and the first family of brothers in the league, the Watts hold that mantle.

Two of the Watt brothers in T.J. and Derek reside in Pittsburgh currently, while J.J. has spent the last two seasons with the Arizona Cardinals. Throughout the course of their careers, the Watt brothers have been quite the special story overall.

Sunday in Week 18, T.J. and Derek added to that special story.

On the day of J.J.’s final game in the NFL after announcing his retirement at the end of the season in early January, T.J. and Derek wore J.J’s Arizona jerseys to the stadium to celebrate the career of their Hall of Fame older brother.

Then, on the field they honored him the best way they know how: by making plays in a 28-14 win over the Cleveland Browns to finish the season with a 9-8 record.

T.J. Watt was a force on defense, finishing with three tackles, half a sack and a quarterback hit, consistently generating pressure on Cleveland quarterback Deshaun Watson throughout the day in a game in which the Steelers recorded seven sacks of the much-maligned quarterback.

While T.J. was doing damage defensively, Derek left his mark offensively, scoring the final touchdown of the season for the Steelers on a 1-yard fullback dive, proving once again that the fullback dive in Pittsburgh remains undefeated in Pittsburgh.

Following Derek’s 1-yard rushing touchdown in what is likely his final game as a Steelers as he enters free agency in the offseason, the Watt brothers shared a hug on the field in a rather special moment on an emotional day for the family.

Speaking after the game, T.J. stated that seeing his older brother Derek score a touchdown on the day they honor his brother J.J. is something that he’ll remember for the rest of his life.

“…To see Derek, I’ve seen him put in the work and to be able to see him score a touchdown is pretty cool. Something that I’ll have that memory for the rest of my life,” Watt stated to reporters following the win over the Browns, according to video via the Steelers official YouTube page. “To be able to see JJ today play his last game is very special. I did not want to be hanging out with him next weekend, but we’ll be able to celebrate together, which will be pretty cool.”

Derek’s touchdown run on the fullback dive came with 4:37 remaining in the game, capping off a 14-play, 75-yard drive that sealed the win for the Steelers. At the time, the Miami Dolphins and New York Jets remained tied at 6-6, giving the Steelers some life in the playoff picture as the Buffalo Bills handled the New England Patriots.

But, the Dolphins obviously kicked a field goal to win the game, keeping the Steelers out of the playoffs, sending the Watt brothers home unhappy with how the season ended overall.

Still, it was an emotional day and an emotional moment for the pair of brothers in the Steel City, who really warmed the heart of J.J. Watt Sunday morning.

With Derek now entering free agency and J.J. off into retirement, who knows what the future holds for the Watt family in the NFL overall. Derek will turn 31 midway through next season and plays a position that doesn’t have a very long shelf life overall. There’s a chance the Steelers bring him back for another season due to his special teams prowess, but it’s likely they decide to cut some costs there and go cheaper and younger at fullback.

If that’s the last moment the Watt brothers got to share in a Steelers uniform, that’s a special moment that will last a lifetime. What a way to cap off an emotional weekend for the Watt family overall.

Man oh man, I wasn’t ready for this this morning.

Genuinely could not ask for two better brothers.

This means the world to me.