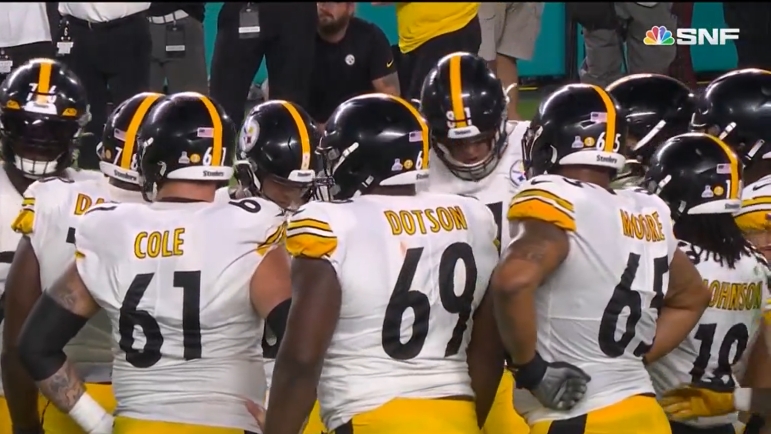 The Pittsburgh Steelers’ offensive line was among the most pleasant surprises of the 2022 season. After hiring Pat Meyer from the Carolina Panthers, the unit progressed immensely from last season in both pass and run blocking. Of course, a large part of this was due to improvement in personnel, as the team added Mason Cole at center and James Daniels at guard, and got a full healthy season out of Kevin Dotson at the left guard position.

ESPN ranked the Steelers’ offensive line as the seventh best in pass protection with a 65% win rate, and 14th best in run blocking with a 72% win rate. Last season, ESPN ranked them second-to-last in pass protection, and 30th in run blocking. The Steelers ranked 17th in sacks allowed with 38, 16th in percentage of dropbacks with pressure at 19.8%, and 16th in rush yards with 2,073.

Introduced just two years ago, the ESPN win-rate metric is a comprehensive analysis intended to objectively analyze the performance of players in the trenches. Given that offensive linemen do not have easily accessible stats such as pass/rush yards, this is a helpful tool to analyze the performance within the trenches. This essentially takes the amount of dropbacks that the team had, in the Steelers’ case 641, and takes the percentage that they “won.” According to this metric, a win for a blocking team is defined by sustaining blocks for over 2.5 seconds after the snap. Otherwise, the win is awarded to the opposing pass rush.

The Steelers had two players rank in the top ten in their respective position’s win-rate. That is, Cole ranked 10th among centers with a 95% rate in pass protection, while Daniels ranked seventh among guards with a 95% win-rate in pass protection. Daniels’ improvement was remarkable throughout the year, as he took to Meyer’s coaching as well as anyone. On the other hand, Cole was an excellent find for the team in free agency, and a big improvement from Kendrick Green last season.

ESPN was more generous to the Steelers’ offensive line than PFF, as their premium stats ranked the Steelers at 14th in pass blocking with a 69.5 grade, and 16th in run blocking with a 58.0 grade. Of course, the PFF grade also accounts for the entire team’s blocking, including running backs and tight ends. However, it is noteworthy that both sites had the unit as better in pass protecting than run blocking.

The Steelers’ starting offensive line played all 17 games together, which is nothing short of a blessing. As such, they grew chemistry and improved as the year went on. This is a relatively youthful group, with the two oldest starters in Cole and Dotson being 26 years old. They are all slated to come back next season, and at least four of them will start again. This is ideal given that the team is investing in Kenny Pickett to continue his development, and it should be the expectation that the unit will improve after a year of playing together in the same system.