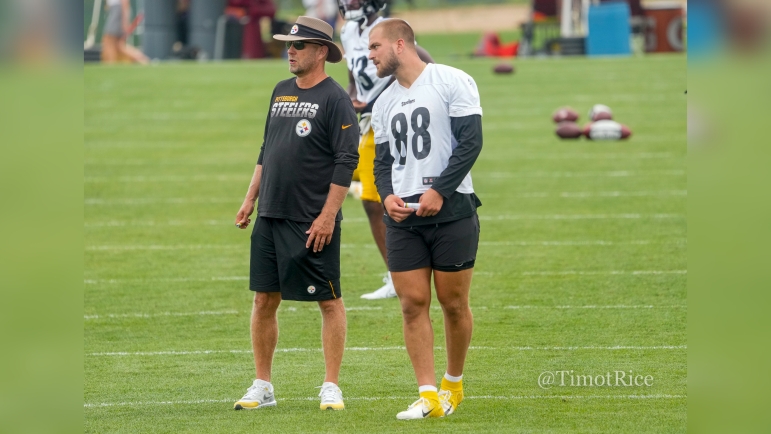 The decision to retain offensive coordinator Matt Canada for the 2023 season wasn’t all that surprising by head coach Mike Tomlin and the Pittsburgh Steelers Wednesday. In fact, it was largely expected.

Still, the decision to retain an offensive coordinator who oversaw an offense that had its struggles throughout the season and finished 25th in the NFL in scoring doesn’t leave a lot of hope for many within the fanbase and the media looking ahead to the 2023 season.

Maybe what’s the most surprising out of the entire situation is former Steelers quarterback turned media member Ben Roethlisberger taking a stand for Canada, defending the much-maligned coordinator in recent weeks. That continued Thursday morning during an appearance on 102.5 WDVE.

In Roethlisberger’s eyes, the decision to retain Canada came down to the Steelers’ 7-2 finish in the second half to get to 9-8, which largely came because of the offense’s improvement, becoming the best third-down conversion offense in the NFL in the second half of the season, as well as the seventh-best rushing attack in football after the Week 9 bye, not to mention the growth quarterback Kenny Pickett showed on a weekly basis.

“I would say seven and two down the stretch. You know, I thought, if you look at everything, I know there was a lot of rumblings throughout last year about Matt and this, that and the other, but look at the way they finished seven and two,” Roethlisberger stated Thursday, according to audio via 102.5 WDVE. “I thought Kenny played a lot better. You have to understand, too, that Matt went into this season with Mitch Trubisky as his starter, so that’s what he thought was gonna happen, and then all of a sudden they make the change to Kenny.

“Well, there’s still a learning curve both with those two together and Kenny in the NFL. …I think having another year, I think you’ll see some improvements from that offense. And like you said, I thought the line played a lot better in the second half than they did in the year before.”

It might not be the popular answer, but that’s largely why Canada is back. That continuity will be important.

The Steelers, much to the chagrin of many lately, are a franchise that values stability and relies heavily on patience and letting the process play out. That’s what is happening with the Canada situation.

Based on the way the offense performed in the second half of the season, there were very real, obvious signs of growth from the unit, which was one of the youngest in the league overall.

Progression and overall development takes time and doesn’t happen on a linear path. Each and every situation is different. Canada certainly doesn’t help himself, in terms of public perception, with the way he handles questions from the media or how he goes about calling plays within games, but he showed the ability to adjust after the bye week and play more to his offense’s strengths, rather than sticking to his overall philosophy.

The decision to retain him and let him continue to grow with the offense isn’t all that surprising. But now that the decision has been made, that improvement has to happen early on in the season, in which hopefully the young offense can carry over what they did in the second half of the season in the running game and on third downs, leading to a successful season in 2023.