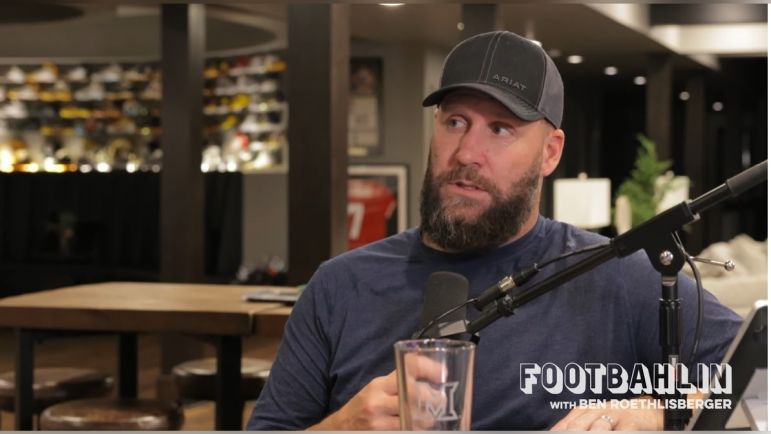 When he played, it felt like Ben Roethlisberger had an icy relationship with Matt Canada. But in retirement, Roethlisberger gave Canada his due for adjusting and building the Pittsburgh Steelers’ offense throughout the year. In the latest episode of his Footbalhin podcast, Roethlisberger praised how Canada handled the offense this year, leaving the unit in a better place than how it started. He also pointed out the Steelers had to win a different way than they did under Roethlisberger and previous offensive coordinators.

“I thought Matt [Canada] did great,” Roethlisberger said during the show. “People talk about him, get rid of him, this, that and the other. 7-2 down the stretch, found a way. I know they are not putting up 40-50 points, but they also wanted Randy Fichtner run out of here after we were putting up 30-some points a game and throwing the ball too much. Now we are running the ball a lot and they want to throw the ball and put up points.”

Criticizing the offensive coordinator is something of an Olympic sport in Pittsburgh and Canada was no exception. But there was plenty to gripe about, especially early in the season. The Steelers’ offense was a mess, one of the worst in football, and averaged exactly 15 points per game by the bye. For a time, it was the lowest mark in the league. By year’s end, they were still tied for just 26th overall. Despite having a top-ten scoring defense, they finished with a negative point differential for the second straight season, something that hasn’t happened in Pittsburgh since 1999-2000.

Things got better the second half of the year as the Steelers established a running game. Points didn’t come in bunches but the offense took care of and possessed the football, grinding out low-scoring victories but being a more effective and efficient offense overall. They ran exactly 500 times, the most since 2007, the days of Fast Willie Parker and an offense that didn’t quite yet run through its quarterback. 2022 was a real shift and adjustment for the team and for its fans.

Under Fichtner and Roethlisberger, the Steelers were an explosive, pass-first offense. That changed in the first year of the post-Roethlisberger era with two new quarterbacks, veteran Mitch Trubisky and rookie Kenny Pickett. It’s flipped how the Steelers win games on offense, getting back to Roethlisberger’s early days of a run-heavy offense and defense that keeps the score down. Canada, like the rest of the offense, found its rhythm by the end of the year.

But Canada’s future with the team remains uncertain. Pittsburgh firing him certainly wouldn’t be a shock and it’s what most fans want, as Roethlisberger points out. But Canada is under contract through next season and the Steelers don’t make it a habit of firing coordinators whose deals haven’t expired. The longer there’s no news on his status, the more likely it is he’ll return as OC next season. We should have an answer by the end of the week.