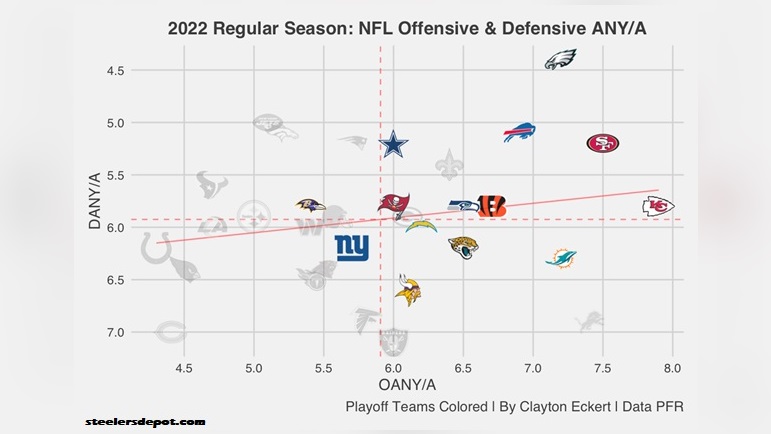 With the 2022 regular season now in the books, I wanted to provide this seasons Adjusted Net Yards Per Pass Attempt (ANY/A) data from Pro Football Reference as we head into the postseason. ANY/A is Passing yards – Sack Yards + (20 * Passing TD) – (45 * Interceptions)) / (Passes Attempted + Times Sacked). Here is a visual for offenses (OANY/A) and defenses (DANY/A): 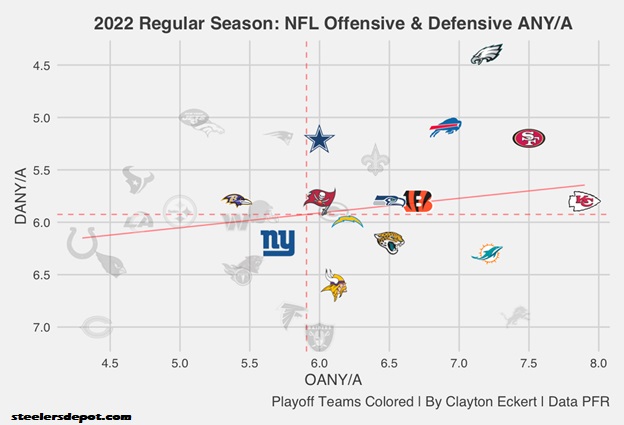 This years ANY/A results are more varied than the 2021 season, when there were more playoff teams comfortably above the mean in both data points. This year there are only three such teams: Philadelphia (top ranked DANY/A), Buffalo, and San Francisco (quarterback Jimmy Garoppolo injured). Kansas City’s 7.9 OANY/A comfortably led the league, along with their 5.8 DANY/A puts them squarely in the group of four frontrunners in my opinion, considering no team has won the Super Bowl since 2000 with a DANY/A of six or more.

12 of the 14 playoff teams (85.7%) landed above the mean in OANY/A, emphasizing the pass happy league we live in today, and the importance of ideally having a number of six or more, considering this high percentage was also the case last season. Four teams I have yet to mention fit this bill, but have DANY/A numbers outside of the Super Bowl predictive criteria: the Dolphins, Jaguars, Chargers, and particularly the Vikings (6.6) that ranks 28th. Miami is the most notable with their strong 7.2 OANY/A that ties for fourth with the Eagles, but important context is quarterback Tua Tagovailoa is injured and has been ruled out of their first playoff opportunity.

Then there’s the Ravens, faring best on defense (5.8) but are the only postseason team with a negative differential due to a 5.4 OANY/A number, but important context is the injury to quarterback Lamar Jackson who exited their week 13 game and hasn’t played since. They previously had a stronger 6.2 OANY/A which is important context if he is able to make a return.

Our beloved Steelers unfortunately just missed the cut this year, making an encouraging surge to end the season with a 9-8 record that was good enough to punch their ticket, but once again in a position of needing help from other games and not getting the same improbable luck as they did in 2021. Pittsburgh ended the 2022 season with a five OANY/A that ranked 27th, along with a 5.9 DANY/A that tied for 15th that both improved, particularly on defense in their post bye stretch with a 7-2 record.

Looking back to add context, the Steelers had an abysmal -2.3 differential through week seven, with poor numbers on both sides of the ball of 4.3 OANY/A that ranked dead last and a 6.6 DANY/A that ranked 20th at the time. The numbers did not improve much through week 12 either, with a 4.4 OANY/A that tied for last in the league and a 6.6 DANY/A (T-24th), inching up to a -2.2 differential that still bottomed the NFL.

This really highlights their positive trend to end the season on both sides of the ball, with a huge improvement in differential to -0.9, and I’m very encouraged for next seasons outlook, hopefully carrying things over and expanding on these results, particularly on offense. Knock on wood the biggest continuation to next season is the positive trend we saw in taking care of the football, with a dire need to improve on passing touchdowns, along with the hope of more downfield success with more experience from quarterback Kenny Pickett and the young offense that is mostly returning.

To close, here’s a table of the 2022 regular season ANY/A results, with the entire row colored if the team has a positive differential, a DANY/A below six, obviously made the playoffs (TEAM colored = playoffs), and sorted by differential with the goal of showing the most likely teams to win the Super Bowl:

The top four teams (as mentioned earlier) are the Eagles, 49ers, Chiefs, and Bills. Second tier teams that meet all the criteria are the Bengals within the division, Cowboys and Seahawks. The final team to meet all the criteria are the Buccaneers, leaving the Dolphins, Jaguars, Chargers, Ravens, Vikings, and Giants on the outside looking in considering the predictive historical ANY/A data. As we know anything can happen though, and it will be interesting to see how it all unfolds.