With the 2021 regular season now in the books, I wanted to provide the final regular season Adjusted Net Yards Per Pass Attempt (ANY/A) data from Pro Football Reference as we head into the postseason. ANY/A is Passing yards – Sack Yards + (20 * Passing TD) – (45 * Interceptions)) / (Passes Attempted + Times Sacked. Here is a visual for offenses (OANY/A) and defenses (DANY/A): 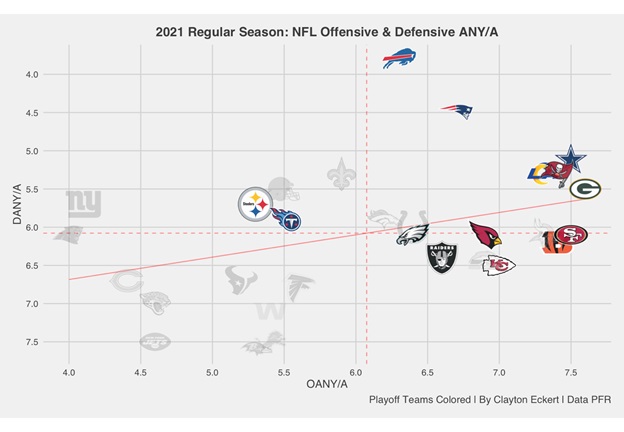 The six teams on the top right are the frontrunners for the Super Bowl, and with the playoff teams colored we can see who is in the picture and how they fared league wide. Here’s what things looked like in Week 15 to see the trends to close the season, which teams were consistent, and who made or dropped off the lists as we dive deeper.

Our beloved Pittsburgh Steelers made the cut, getting the improbable help they needed from two games, along with their overtime win in the finale against the Ravens! The Raiders win was one that benefited Pittsburgh, punching their ticket to the postseason and eliminating the Chargers! The Titans land similar to the Steelers on the graph, with their playoff position especially impressive minus running back Derrick Henry for several games, and a scary team with him likely returning soon. Teams that landed near the playoff bound but missed out include the Vikings, Chargers, Seahawks, Colts, Broncos, Saints, and Browns with many making previous ANY/A lists.

What are your takeaways from the graph and how the playoff teams played out?

Here’s a table showing the most likely Super Bowl Winners, with the entire row colored if the team has a positive differential, a DANY/A of 6.1 or below, and obviously made the playoffs (TEAM colored = playoffs):

As we saw on the graph, the top six teams have been solidified for some time now. The Cardinals have fared well with the data but have trended down at the end of the season. The teams that did not make the Week 15 list are the 49ers who only missed the DANY/A by 0.3 and Philadelphia as the ninth and final team to meet all the criteria, especially with a positive DANY/A trend since Week 10.

So, the data suggests the 2022 Super Bowl Champion will most likely be one of the following nine teams (in order of differential): Bills, Cowboys, Patriots, Bucs, Packers, Rams as the most likely along with the 49ers, Cardinals, and Eagles.

As we learned this past weekend, anything is possible. With the first important step to make the playoffs complete, now it’s time to sit back and watch it all unfold and see what the Steelers can do in their next step against the Chiefs.