Today I wanted to take a look at and provide the data for the all-important Adjusted Net Yards per Pass Attempt (ANY/A) stat, which is (Passing Yards – Sack Yards + (20 * Passing TD) – (45 * Interceptions)) / (Passes Attempted + Times Sacked). Taking the offensive (OANY/A) and defensive (DANY/A) results, we get a differential. To review the importance of the stat, only one Super Bowl Winner since 2000 has had a negative differential, and no team has had a DANY/A of six or above. Today’s goal is to see how the Pittsburgh Steelers have fared, along with seeing where the NFL sits with two-thirds of the season in the books.

Here are the results for team offenses and defenses through week 12: 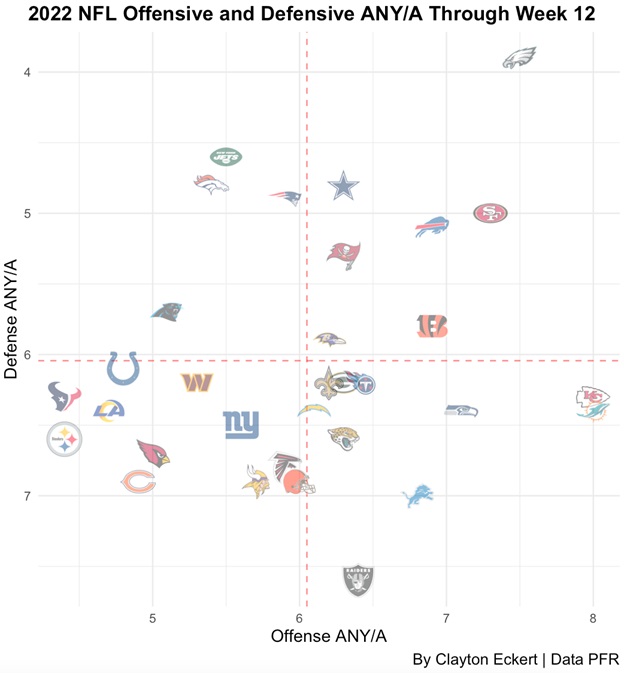 The next ranks in differential tie for the best OANY/A of eight, the Chiefs and the Dolphins. If the season ended today, their DANY/A miss the Super Bowl criteria, so it will be interesting to see how the strong teams fare on that side of the ball for the remainder of the season, and if they can get their numbers below six considering they are 6.3 and 6.4 respectively.

Dallas ranks sixth in differential, tying for third in DANY/A (4.8) and a 6.3 OANY/A, looking strong on both sides of the ball as of late with quarterback Dak Prescott back from injury. The seventh rank in differential are the AFC North Bengals, currently tied for sixth in OANY/A (6.9) with the Bills along with a 5.8 DANY/A, and it will be interesting to see how that number trends considering it teeters the criteria and their Super Bowl appearance last season.

Two other teams are above the mean in both data points, starting with the Buccaneers. They are tied for eighth in differential, with a 5.3 DANY/A (eighth) and a 6.3 OANY/A that ties for 11th. The divisional opponent Ravens are the other, with the 11th rank on defense (5.9) and tied for 15th on offense (6.2). We can see they are literally on the line of the historical criteria for Super Bowl Winners just like the Bengals, so it will be very interesting to see how the two divisional opponents’ trend in the final third of the season.

The remaining teams meet the historical criteria thanks to their defensive play, but are on the outside looking in. The Patriots rank fifth on that side of the ball with a respectable 4.9 number, and 5.9 OANY/A that ranks a much lower 19th that results in a tie for eighth in differential with the Bucs. The Jets impressively hold the second rank on defense (4.6) giving them a tenth ranked differential despite their 23rd rank on offense (5.5). Similarly, the final team to meet the criteria is the Broncos, tying for the third rank on defense (4.8) with the Cowboys, but a low 5.4 on offense that ranks just below the Jets at 24th.

You did not need me to tell you the Steelers are a far cry from these aspirations, and the visual really highlights how bad things have been. While we have seen some improvements including a win in their last affair, their OANY/A has only come up one decimal point since my article through week seven, now at 4.4 which ties for dead last with the Texans. Pittsburgh’s DANY/A remains at 6.6 (T-24th) since week seven as well, resulting in the worst differential in the league at an abysmal -2.2! Really hoping and expecting the numbers to improve on both sides of the ball with games against the Falcons, Panthers, Raiders, and Browns on the horizon, considering each having a negative differential, and very curious to see how the Steelers fare in the two remaining matchups against the Ravens.

Here is a table view of the data, ranking the teams by ANY/A differential, and the data colored in green meeting the historical Super Bowl Winner criteria:

Currently the Eagles, 49ers, and Bills are the top three, followed by a second tier of the Cowboys, Bengals, Patriots, and Buccaneers. The less likely third tier are the Jets, Broncos, and Ravens, who have the lowest differential of current qualifying teams. Very notable teams that have a great chance to meet the criteria soon are the Chiefs and Dolphins with the needed improvements on defense mentioned earlier, and similar teams close to the criteria that currently have positive differentials are the Seahawks, Titans, Packers, and Saints.

Gut wrenching to see the Steelers all the way at the bottom. With six games remaining, here’s to hoping Pittsburgh can trend positively against a lighter strength of schedule, putting together a better stretch particularly on offense with quarterback Kenny Pickett hopefully building on some positive trends of late, along with the DANY/A numbers improving with a knock-on wood healthy and more consistent defense to close out the season.

What are your thoughts on the results for the Pittsburgh Steelers and across the NFL? Thanks for reading and let me know your thoughts in the comments!