Now that a reasonable sample size for the 2022 season has built up, it’s time to see where teams land in one of the best singular stats in our opinion at Steelers Depot: Adjusted Net Yards per Pass Attempt (ANY/A), which is (Passing Yards – Sack Yards + (20 * Passing TD) – (45 * Interceptions)) / (Passes Attempted + Times Sacked). Taking the offensive (OANY/A) and defensive (DANY/A) results, we get a differential. To review the importance of the stat, only one Super Bowl Winner since 2000 has had a negative differential, and no team has had a DANY/A of six or above. Obviously, today’s goal is not to argue the 2-6 Pittsburgh Steelers chances to win it all, but rather see how they stack up across the league. Here are the results through week seven of the 2022 season: 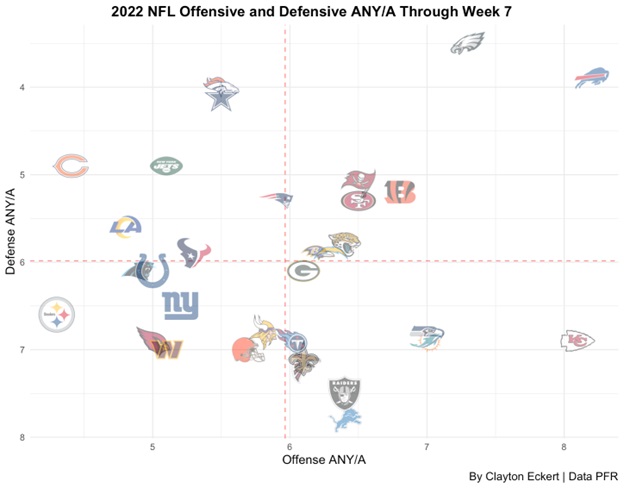 Right away we see the Steelers as one of the below the mean teams in both data points. While many of us expected this offense to take time and not be up with the likes of Buffalo and Kansas City, it has definitely been worse than I expected with an OANY/A (4.3) that ranks dead last. Pair this with a running game that is toward the bottom of the league, and struggling to get in the end zone, it’s been painful to watch for much of the season.

We also knew the defense would have to pick up the slack for the young offense, but without edge rusher T.J. Watt have really struggled with inconsistent play. Encouragingly they held Miami to only 16 points, but the biggest thorn in the side was four dropped interception opportunities. Hopefully this unit will really turn it around and capitalize in these situations with takeaways in the coming weeks, and along with Watt’s return, step up for this team and in turn improve their 6.6 DANY/A that currently ranks 20th.

The tough challenges continue though for Pittsburgh, with another tough road game against the Philadelphia Eagles. They are at the top of the league in many statistical categories, including the top rank in DANY/A with a 3.5 number! They pair that with a 7.3 OANY/A, which is third best on offense. This highlights how strong they’ve been as a team, the last undefeated squad in 2022. The Bills land at the top right with a second ranked 3.9 DANY/A to pair with their aforementioned top ranked 8.2 OANY/A. The remaining teams that are above the mean on both sides of the ball are the Bengals, Bucs, 49ers, Jags, Chargers, and Ravens, along with the Broncos and Cowboys faring very well on defense.

Here is a table view of the data, ranking the teams by ANY/A differential:

The Pittsburgh Steelers rank dead last in differential, with an extremely rough -2.3 number and the only mark to eclipse -2, ouch. I was definitely correct when looking at the initial numbers following week one, with the defense coming back to earth after a stellar opener and the offense unable to improve, actually regressing harder than many expected. It will be interesting to see where the team goes from here, with hopeful improvements on both sides of the ball coming (knocks on wood).

What are your takeaways on the data and across the NFL? Thanks for reading and let me know your thoughts in the comments!