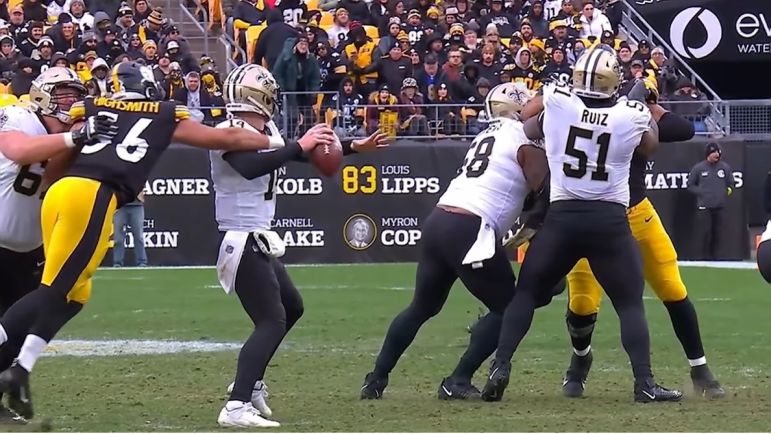 Alex Highsmith did more than have 14.5 sacks this season, sixth-best in football. He led the league in one category that didn’t get nearly the attention it should’ve. His five forced fumbles tied for the league’s top mark, a major jump after recording just one forced fumble his first two years in the league.

In a sit-down interview with Steelers.com’s Dale Lolley, Highsmith explained how he improved to not only get after the quarterback but take the football away.

“I think it starts in practice,” Highsmith told Lolley. “For me, especially coming off the blindside, I always want to be ball-searching. A lot of quarterbacks are righties, looking away from me.”

The ROLB has an advantage over his LOLB teammate, rushing from the quarterback’s blindside. With their back turned and hips set to the right, it’s harder for them to see the ROLB come off the edge. “Ball-search” is a phrase you’ll hear every day of training camp, sometimes the gameday microphones even pick it up, and is an idea repped and talked about even more since Teryl Austin was hired in 2019.

But that’s only half the battle. For Highsmith, he has to actively focus on taking the football away, not just crunching the quarterback.

“I know there’s times in college where I got around the edge, I wanted to hit the QB as hard as I can. Especially now with different rules and everything, really the emphasis is on getting the ball out. I think it starts in practice, bending the corner, reaching my arm out to get that. I think it really paid off for me this year.”

When Highsmith punched the ball out, the Steelers won, a perfect 5-0 when he recorded a forced fumble this season. His success there was greatest than the rest of his teammates. And I mean that literally. His five forced fumbles were more than the entire Steelers’ defense had combined, the rest of the unit having only a combined four. The secondary made up for it with 20 interceptions, tied for the league-high and with the offense taking good care of the ball after the bye, they finished with a +4 turnover differential, tied 9th-best in the league.

As Highsmith said, his work paid off this year. That could turn to literal dollar bills this summer. Entering the final year of his rookie contract, the Steelers would be wise to open up contract extension talks. If a deal is reached, he could get close to $20 million per season. At the least, he’s likely to net more than Bud Dupree did when he left the Steelers for the Tennessee Titans.