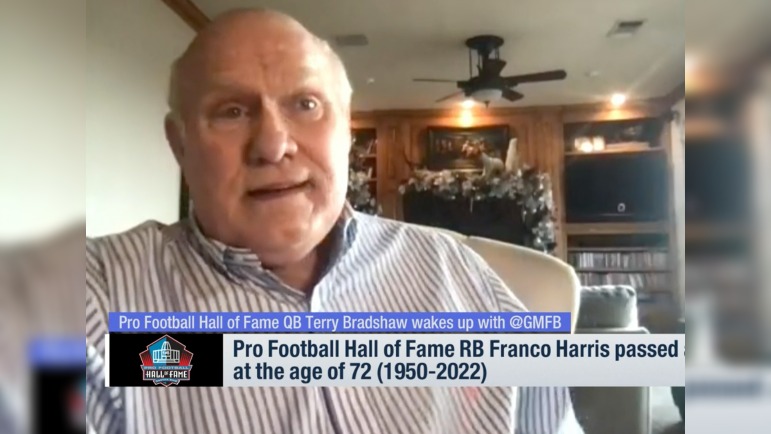 The football world woke up Wednesday morning to the tragic news that Steelers legend Franco Harris had passed away overnight at the age of 72. The timing of Franco’s passing couldn’t have been more shocking, with the 50th Anniversary of the Immaculate Reception and the retirement of his #32 jersey occurring on Christmas Eve Saturday night in a game where the Pittsburgh Steelers would face the Las Vegas Raiders in Pittsburgh, the same team that Harris made the greatest play in NFL history against a half a century ago.

Legendary Steelers RB Franco Harris, author of the “Immaculate Reception” – one of the greatest plays in NFL history – has passed away at the age of 72.

A 4-time Super Bowl champion, Hall of Fame player and revered individual by so many.

Many players have taken to Twitter to express their condolences and prayers for the Harris family, but Franco’s former teammate and fellow Hall of Famer QB Terry Bradshaw went on GMFB on NFL Network this morning to speak to the cast about his relationship with Harris over the years and what Franco’s friendship means to him both on and off the football field.

“I’m just gonna remember Franco for being a great teammate,” Bradshaw said on GMFB. “He was a great teammate. I was not a captain of the football team ever. Franco, I don’t believe was either, but he was a very vocal guy on the sidelines in the huddle. He’s such a good man. I can’t get past that. Always smiling… always smiling. And you guys have hit it right on the head. Such a humble, giant… superstar. I’m just gonna miss his friendship.”

Bradshaw and Harris were teammates on the Steelers from 1972-1983, the entirety of Harris’ time with the Black and Gold. During that time, the two combined to win four Super Bowls and a host of other accolades on the field as they would become entrenched in Pittsburgh Steelers lore for generations to come.

While Bradshaw commended the teammate Harris was on the field, he also praised the man he was off it. His smile was infectious as he made himself a visible member of Steelers Nation long after his retirement, representing the black and gold in various events including the announcing of draft picks, attending alumni events, or making appearances at games in Pittsburgh.

Steelers HC Mike Tomlin just said a day prior to Franco’s passing that his impact on the Steelers and the city of Pittsburgh is unparalleled as a humanitarian as well as a mentor to numerous former and current Steelers. There is no denying that Harris and Bradshaw share a special bond and that while Bradshaw will miss his long-time friend, he fully intends to celebrate the wonderful life he has lived and the memories the two share.

“Death is such sorrow,” Bradshaw continued. “We know that we celebrate death because we know he is going to a wonderful place in heaven. He’ll be there with some more of our Steeler teammates, and there’ll be a little Steeler gathering in heaven today. Welcome to the Italian Army, the Italian Stallion in Franco Harris. Will he be missed? Certainly, but he’ll be talked of forever with love and admiration and the fondness for a great man and a wonderful teammate.”