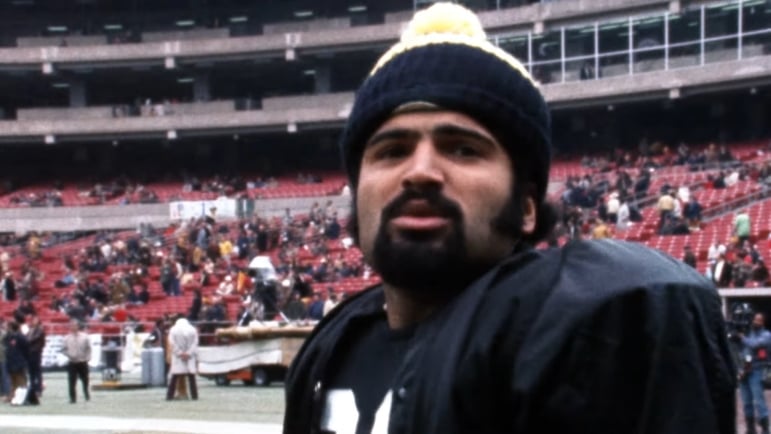 Pittsburgh Steelers Hall of Fame running back Franco Harris has passed away overnight, according to his son Dok, multiple sources report this morning. WTAE was the first to report it. Will Graves of the Associated Press just minutes ago confirmed that Harris’ son informed the AP. Graves adds that no cause of death was given at this time. He also leaves behind his wife, Dana Dokmanovich.

PITTSBURGH (AP) _ Pittsburgh Steelers Hall of Fame running back Franco Harris has died. He was 72. His son Dok tells The Associated Press Harris passed away over night.

A first-round draft pick in 1972 out of Penn St., Harris became one of the great players at his position in NFL history and served as a focal point for a dynastic Steelers team throughout the decade. A four-time Super Bowl champion, a nine-time Pro Bowler, a first-ballot Hall of Famer, and author of the most iconic play in football history, his legacy was set to be honored this weekend.

December 23 marks the anniversary of the play voted on as the greatest in NFL history, the Immaculate Reception, a game-winning Divisional Round touchdown over the Oakland Raiders in 1972 that marked the Steelers’ first postseason victory in franchise history.

Trailing 7-6 with 22 seconds to play, Harris was assigned to stay in for pass protection on the fourth-down play. After escaping pressure, quarterback Terry Bradshaw heaved the ball in the direction of running back Frenchy Fuqua, who was met by Raiders defensive back Jack Tatum. The ball ricocheted backward and Harris scooped it out of the air, running down the sideline for a touchdown.

The play became known as the Immaculate Reception and has been immortalized in so many different ways, including a statue at the Pittsburgh airport. Harris was set to have his jersey officially retired against the Raiders when the Steelers play them at Acrisure Stadium on Christmas Eve.

The game will be played with a dark pallor overhanging it now and will become a tribute rather than a celebration. So many who defined that play still remain with us, including Fuqua, and yet now Harris is gone, according to early morning reports.

A native of Fort Dix, NJ, son of a World War II veteran, Harris embraced his mother’s Italian heritage. His fan club became known as Franco’s Italian Army and was a staple of the city of Pittsburgh throughout his playing career. An excellent high school player, he often played second fiddle to Lydell Mitchell at Penn State. It was even thought at one point that the Steelers would draft Lydell, who eventually was selected in the second round, rather than Harris. While both are in the Hall of Fame, I think history has indicated that they made the right choice.

Playing nearly his entire career in Pittsburgh, Franco rushed for 12,210 yards in his career with 91 touchdowns, totaling 100 scores in the regular season. He added another 1,556 yards and 16 rushing touchdowns in a 19-game postseason career that included a 158-yard day in the Steelers’ first Super Bowl win in 1974 over the Minnesota Vikings.

Among the most amiable personalities in sports, Harris’ appeal transcended generations. He represented the Steelers and the city of Pittsburgh with great respect throughout his adult life and was forever an ambassador of the brand. It’s one of the many reasons that they are set to make his jersey just the third ever retired in the franchise’s history, preceded only by Ernie Stautner and Joe Greene.

The timing is, of course, stunning, coming just days before the 50th anniversary of the single moment of his life with which he is most identified. If there is such a thing as cosmic timing, it could hardly have been more out of whack on this one.

I’m sorry you all have to wake up to this. It’s an awful day in Steeler Nation.