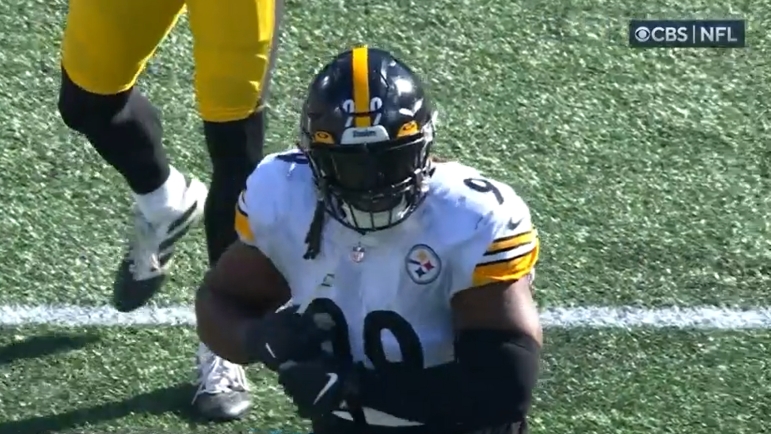 Talk about imposing your will.

That’s exactly what the Pittsburgh Steelers did Sunday on the road in Week 15 against the Carolina Panthers at Bank of America Stadium in Charlotte, running all over the Panthers and dominating in the trenches on both sides of the football in an important 24-16 win to keep the faint playoff hopes alive.

After getting bullied in Week 14 against the Baltimore Ravens, the Steelers answered head coach Mike Tomlin’s challenge in a big way, winning at the point of attack in the trenches all day long, leading to a win that wasn’t as close as the final score indicated.

On the day, the Steelers rushed for 156 yards and three touchdowns, didn’t turn the football over, held the Panthers to just 21 rushing yards on the day and recorded five sacks, rolling to an important win.

One week after throwing three killer interceptions in the loss to the Ravens, Mitch Trubisky bounced back in a major way on Sunday against the Panthers.

Though the raw numbers aren’t all that impressive overall (17-for-22, 179 yards passing; six carries, nine yards, one touchdown), Trubisky did a great job taking care of the football on the day. He never really made that killer mistake (just one questionable throw in the first half) and really did a nice job of being on time and in rhythm.

His deep ball to George Pickens in the first half was perfectly thrown down the sideline, and his connection with Diontae Johnson in the second half helped the Steelers’ offense have great balance in the win.

Coming into the Week 15 matchup against the Panthers, the Steelers wanted to win the line of scrimmage and run the ball at a high level.

The Steelers came out and punched the Panthers in the mouth time and time again on the day, rushing for 156 yards and three touchdowns on an impressive 45 carries, putting the game away. They were the more physical team overall and it showed throughout the day.

Najee Harris finished with 86 yards and a touchdown on 24 carries, while Jaylen Warren added 38 yards and a score — the first of his career — on 11 carries. The duo was very physical throughout the matchup Sunday, consistently causing the pile to fall forward after running through tackle attempts. When they’re able to play downhill and use their physicality, they’re a dynamic tandem.

Diontae Johnson had a terrific day against the Panthers, catching all 10 targets for 98 yards on the day. Johnson consistently won on his routes and made defenders miss in space with the football in his hands, including on a key third and long in the second half, forcing three Panthers to miss.

However, Johnson had a bad taunting penalty called after the play which set the Steelers back. Fortunately, Pittsburgh was still able to end the drive in a touchdown, but it was a good summation of Johnson’s year overall in one play.

Opposite Johnson, George Pickens had a strong day, hauling in two of his five targets for 53 yards on the day, including a spectacular 38-yard contested catch down the left sideline in the first half on a dime from Trubisky. There is no better receiver in the NFL right now on contested catches than Pickens, especially along the sideline. His hands and body control are absurd.

Outside of Johnson and Pickens, Steelers receivers had a quiet day, in large part due to the game plan.

It was quite clear from the start of the game that Pat Freiermuth was going to be on a pitch count due to his foot injury he was dealing with all week leading up to the matchup.

Freiermuth played just 38 of 60 snaps and wasn’t targeted once in the win. He was mainly a decoy on the day. It worked out overall.

The tight ends made a real impact in the run game though, especially Zach Gentry. While Gentry had one catch for four yards, he was solid throughout the day as a blocker, winning on the edge for the Steelers throughout the afternoon. He worked well in tandem with Dan Moore Jr. on the left side of the offensive line and really helped clear lanes.

This was arguably the best game the Steelers’ offensive line played all season. They were simply dominant.

Dan Moore Jr. had a great game as a run blocker. He was a real people mover up front, consistently moving guys off the line of scrimmage to clear lanes for Harris and Warren. Same for Kevin Dotson at left guard. He played very well next to Moore in the run game, consistently winning at the point of attack.

James Daniels had a key block to spring Warren on a screen pass, and Chukwuma Okorafor played rather well in pass protection overall, though he did allow one sack to Brian Burns in the win.

On the day, the Steelers’ offensive line allowed just the one sack and just two quarterback hits.

After struggling to get off blocks and make plays against the run, the Steelers’ defensive line dominated on Sunday against the Panthers.

Larry Ogunjobi was arguably the best defender for the Steelers Sunday. He lived in the Panthers’ backfield, finishing with five tackles and two tackles for loss. He was impactful right away, making a tackle for loss on the first play of the game. He was simply unblockable throughout the day.

So, too, was Cameron Heyward, who recorded 1.5 sacks in the win and was consistently playing on the right side of the line of scrimmage against the Panthers’ run game. He was a force one week after stating he needed to play better.

Isaiahh Loudermilk recorded a tackle for loss against the run on the day, while Montravius Adams and Tyson Alualu played rather well at nose tackle when the Steelers rolled with three down linemen in the win.

Without Myles Jack in the lineup, the inside linebackers had a rather strong day overall, which was a bit surprising.

Devin Bush had four tackles in the win, making plays consistently around the line of scrimmage, while Robert Spillane led the Steelers with seven tackles and one tackle for loss. They played well downhill against the run throughout the day, though Spillane was a mess in coverage once again.

Rookie Mark Robinson got some run at inside linebacker and played fast and physical downhill. Though he wasn’t credited with a tackle in the win, he was around the football a ton, which was great to see from the young linebacker in his third career game.

Outside, T.J. Watt and Alex Highsmith were outstanding. Highsmith had a clear boost to his game in his homecoming to Charlotte. He recorded a sack, a tackle for loss and four run stops in the win, forcing a fumble on D’Onta Foreman in the win as well, though the Panthers were able to recover it. Watt added 1.5 sacks in the win as well, looking like the Watt of old in the matchup.

The safety tandem of Minkah Fitzpatrick and Terrell Edmunds was very, very good on Sunday. I have no issues there. Edmunds was a force in the box, finishing with six tackles, while Fitzpatrick flew around in the secondary, breaking up a pass while providing serious physicality.

The issue with the secondary was the cornerback play on Sunday. They were bad overall.

James Pierre had a blown coverage on Terrance Marshall’s big catch in the first half, completely losing his responsibility to the deep third, letting Marshall run free. Safety Damontae Kazee was late to rotate over, allowing the completion overall. Levi Wallace was a mess as well, allowing DJ Moore and Marshall to beat him throughout the afternoon.

Cam Sutton was the best corner on the day, which isn’t surprising, but he was hit with a pass interference penalty in the win and was just a step behind in zone coverage at times. The Steelers need serious help at the position ahead of the 2023 season.

Kicker Chris Boswell looked rather solid once again, drilling a 50-yarder to ultimately seal the game late in the fourth quarter. He also nailed all three extra points.

Punter Pressley Harvin III bounced back from an awful performance against the Ravens to finish with a 45.8-yard average on Sunday against the Panthers. He downed one inside the 20-yard line and should have had a second if Pierre was able to keep his toe off the goal line teaming with Miles Boykin on a great play to keep the ball out of the end zone.

The issues on special teams were terrible decisions.

Steven Sims started the terrible decisions late in the first half by allowing a Johnny Hekker punt to bounce at his own 20 and roll deep into the Steelers’ end of the field, resulting in awful field position to end the half. He has to catch that punt. Why he didn’t remains rather puzzling.

Then, Marcus Allen went nuclear in the second half, drawing about as bad of an unsportsmanlike conduct penalty as you’ll see, entering the Panthers’ huddle to talk trash to some members of the Panthers before a key fourth down punt. The penalty instead gave the Panthers a first down and extended the drive, which the Panthers ultimately kicked a field goal on.

Danny Smith needs to get his group in order. It’s a mess.