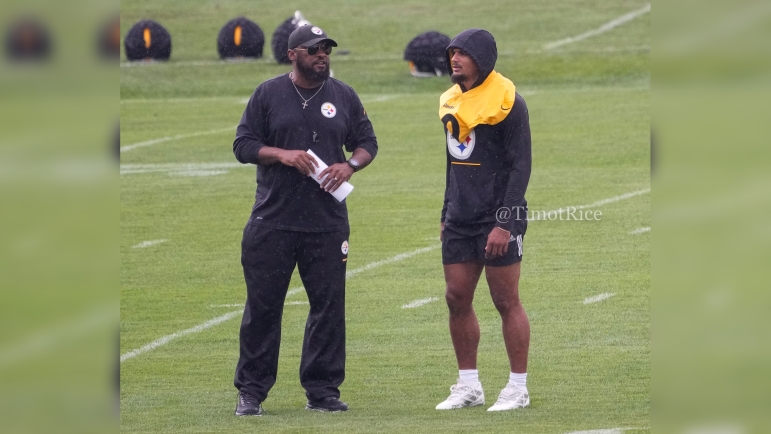 Sitting at 6-8 on the season, the year is essentially all but over for the Pittsburgh Steelers.

While there are still three games to play, including an emotionally-charged Christmas Eve matchup at Acrisure Stadium against the Las Vegas Raiders to celebrate the 50th anniversary of the Immaculate Reception and retire Franco Harris’ number, and there’s a faint chance at the playoffs, for many intents and purposes, the season is all but over.

With three games left in the season, the Steelers are playing for pride. Inside the locker room, they’re also playing to extend Mike Tomlin’s non-losing seasons streak to 16 seasons, which is a remarkable feat in its own right.

While many have rolled their eyes at the accomplishment and cite the lack of playoff success in the last six seasons, the players want to ensure that Tomlin continues to never have a losing season.

Speaking with reporters Monday from inside the locker room at the UPMC Rooney Sports Complex on the South Side, Fitzpatrick stated he takes pride in the record and wants to do whatever he can to keep the streak alive for a beloved coach that still has the respect and attention of the locker room all these years later.

While the non-losing season streak might be inconsequential to fans without the playoff success that comes with it, inside the locker room it means a great deal to veteran players and key leaders overall who want to win for their head coach and don’t want to be associated with the team that ultimately breaks that streak.

Of course, the easy counter to Fitzpatrick’s comment is that the Steelers should have played better earlier in the season to avoid being in this situation needing to win out to avoid the non-losing season. But, the Steelers dealt with a number of injuries and overall moving parts in and out of the lineup that led to a lot of struggles in the first half of the season.

They’re a different team after the Week 9 bye week and are playing some good football.

Maybe they win out and avoid the losing season for Tomlin. Maybe they lose one of the last three and secure that losing season. Then, everyone can have their moment and move on. But don’t be frustrated with the players focusing on the non-losing seasons streak at this point in a relatively lost year.