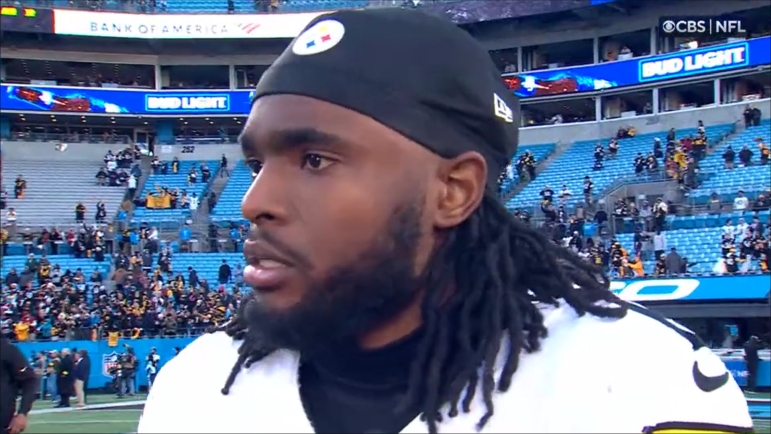 The Pittsburgh Steelers entered today’s game at risk of suffering their first losing season since 2003, four years before Mike Tomlin came on board as head coach in 2007. He’s gone 15 seasons without ever posting a losing record; he escaped that fate today for at least another week, but he’ll be staring that down each week for the next three weeks.

Interviewed after a 24-16 win over the Carolina Panthers by AJ Ross, he did say that Tomlin’s streak of non-losing seasons is “real important to us” as players, something that several others admitted during the week, including Montravius Adams, who was only picked up off the New Orleans Saints practice squad about a year ago.

“He’s been having winning seasons pretty much every year”, the fourth-year veteran wide receiver said. “We want to finish out strong for him, and us as well. Because we’re not out of it. At the end of the day, we just have to win our games, take each week at a time. Finish strong and you never know what can happen”.

“It’s really important to us… We want to finish out strong for him."

After the @Steelers 24-16 win in Carolina, Diontae Johnson talked about Mike Tomlin’s 15 year streak of seasons with a record of .500 better.

Now sitting at 6-8, Pittsburgh is very close to elimination from postseason contention, which could happen at any week—it could have even happened today. The New York Jets and Miami Dolphins both losing this week does help them, but they still need more, including a New England Patriots loss, playing the Las Vegas Raiders at the moment.

The thing is, this non-losing streak is something for others to talk about and to embrace. It’s not something that Tomlin has ever publicly admitted or been reported to acknowledge as being important to him. In fact, it was even said during the broadcast that the crew asked him as part of their preparations if it was important, and the only thing he said was, “Nope”.

Its importance lies only in the fact that he can encourage individuals to stay motivated to strive for something greater than themselves. That’s even more important for a team that is still mathematically “in the hunt”.

And I think it’s entirely reasonable for a head coach whose team is still in the playoff race to continue to do everything he can to win games, rather than giving up and saying it’s best for the long run to lose as many games as possible.

A number of players have individually commented on the record this week, and yet they’ve pretty much all said that it’s not something that gets talked about—certainly not from Tomlin. But like a fielder in a perfect game, nobody wants to be responsible for breaking the streak.

You’re still probably going to win the game if you allow one hit in an otherwise perfect game. Whether the Steelers finish 8-9 or 9-8 may well not make a difference. But would you want to be on the roster that ended a 15-year streak? I doubt it.