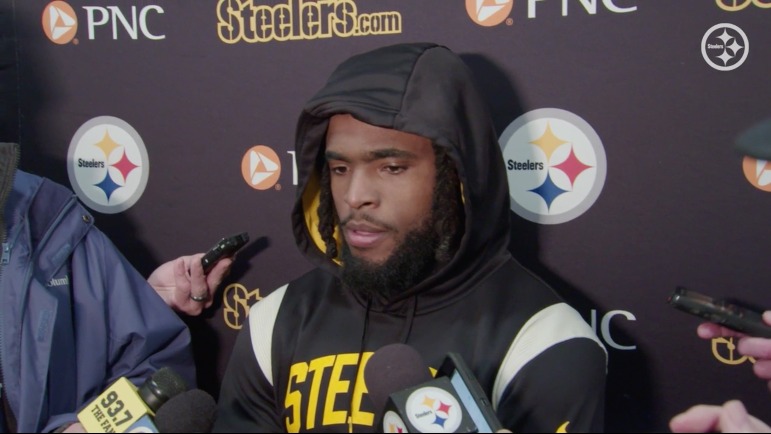 Despite the Pittsburgh Steelers getting the win last Sunday over the Atlanta Falcons on the road, rookie wide receiver George Pickens was seen on camera complaining about not getting the ball. Pickens finished the game with just one reception for two yards, his second-lowest output of the season. Fellow wide receiver Diontae Johnson was asked today what his advice is to Pickens when he isn’t getting the looks he wants.

“Just keep playing, always stay ready. You never know when the ball gonna come your way. The minute you put that in your head, ‘I’m not getting the ball, I’m not getting enough targets,’ that’s when you start to focus on the wrong things and you don’t really be as locked in as you should be. When it’s time for a play to be made, you ain’t really all the way in cause you worry about the last play or you worry about not getting the ball. So it’s just really focus on the right things,” Johnson said via Steelers.com.

Pickens’ outburst really isn’t that great of a look for the rookie wideout. It’s a good thing that he wants the ball, and Mike Tomlin said as much during his press conference on Tuesday. But at some point, you have to recognize that the way the Steelers are playing, there aren’t a whole lot of receptions to be had. That sounds stupid to say when you consider Kenny Pickett had completions to nine different pass catchers, but right now, this team is winning by running the ball and spreading the ball around to give the defense different looks.

Even though Pickens is the No. 2 receiver, right now this isn’t a downfield offense that’s always going to look to hit big plays, which is something that Pickens has been very good at this year. Pickett only completed 16 passes on Sunday, as the Steelers ran the ball a whopping 37 times. With Pickens’ blocking ability as a receiver, he should take pride in that part of his game and use it to help the Steelers continue to win. If the team is winning, ego and personality should be set aside in favor of the greater good, and Pickens’ public frustration and subsequent actions postgame when he refused to be interviewed show that he probably cares about his touches a little too much.

Johnson’s advice to him is spot-on. Pickens has been responsible for 11 explosive plays this year, so he’s got to stay ready and be able to make a play. When the Steelers dial up a shot play, Pickens is the guy they’re probably going to look to go to. If he’s hanging his head and not locked in because he’s upset he hasn’t gotten the ball enough, his chances of being ready and making that play probably aren’t as high. Staying locked in throughout the game and controlling what you can control are keys to being successful in the NFL. For all the talent Pickens has, that’s something he has to work on.