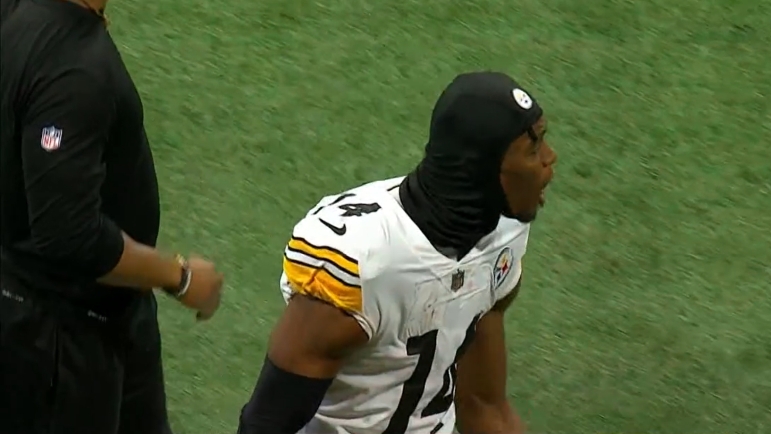 Mike Tomlin is unconcerned with your opinions over George Pickens’ frustration. Despite the Pittsburgh Steelers notching a big win over the Atlanta Falcons, Pickens vented his frustration throughout the game after only seeing two targets and one catch for a measly two yards.

Speaking during his weekly Tuesday presser via the team’s YouTube channel, Tomlin wasn’t bothered by Pickens’ actions and believes the media is making too much of a story out of it.

“I’d rather say whoa than sic ’em,” Tomlin said, invoking one of his favorite phrases. “I want a guy that wants to be a significant part of what we do. Now the appropriate and professional and mature way to express that we’re growing and working on. And that will continue. But that spirit, that competitive spirit, nah, I want that guy.

“I imagine T.J. wants to lay the QB down more. We’ve got competitors. This is professional football. These guys know they have to deliver. For a guy who wants to do that, I’m not going to make that a negative. No matter how silly I think the commentary is or people talking about him expressing frustrations and stuff and trying to make it a negative storyline. I laugh at that.”

You can listen to Tomlin’s words – and you should – because they carry far more weight than just what you might read.

In a run-heavy game with targets focused on tight ends and WR Diontae Johnson, Pickens was only targeted twice. His lone catch came on a simple sprintout for just two yards, a play that may have been designed to try and keep Pickens happy as he was worked through his frustrations on the sideline. After one failed third down in which he wasn’t targeted, Pickens was visibly upset coming off the field and yelling for the football.

Tomlin’s been the head coach of the Steelers since 2007 and has seen a long list of players being upset in-game. What Pickens did wasn’t professional but it certainly is common, especially among receivers. All the guys in that room have vented throughout the year whether it was Chase Claypool wanting more deep ball opportunities or Diontae Johnson to be more involved in the offense.

For Tomlin, his focus is on getting the Steelers back in the playoff hunt. Which means ignoring all the noise.

“We’re capable of tuning that BS out,” he said of the Pickens’ storylines.

Pickens has had a strong rookie season but has had his fair share of uninspiring performances, a feast/famine big play receiver in an offense with a rookie quarterback that wants to run the football. He’ll have more big games in the future. Having one in a crucial game against the Ravens would be a great place to start.