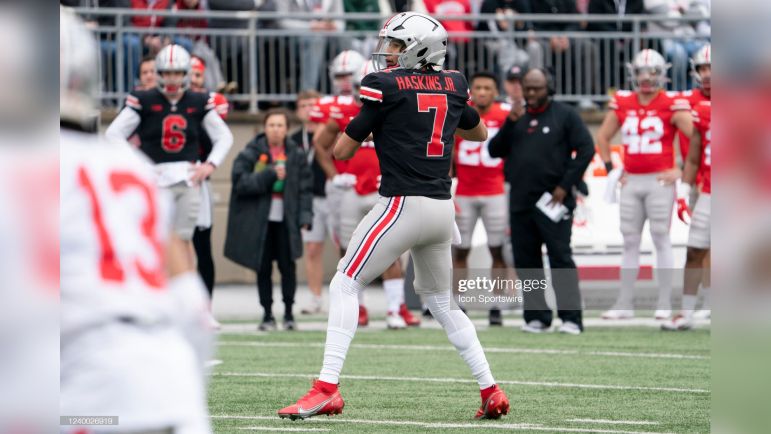 The College Football Playoff is set to kick off the semifinals today on New Year’s Eve with the Horned Frogs of TCU facing the Michigan Wolverines in the Fiesta Bowl and Georgia and Ohio State squaring off in the Peach Bowl Saturday Night.

Ohio State QB C.J. Stroud is widely considered one of the top QB prospects in the 2023 NFL Draft and a likely Round One lock come April. He spoke to the media prior to the Buckeyes’ upcoming matchup against the top-ranked Bulldogs but was asked a question about a former Pittsburgh Steeler that has particularly left a mark on him as well as the entire university.

That former Steeler is the late Dwayne Haskins who passed away on April 9 after getting killed in a car accident in South Florida. He was down there participating in throwing sessions with the rest of the Steelers’ QBs and skill position players, working with his teammates in the offseason in attempt to battle Mitch Trubisky and Mason Rudolph at the time for a roster spot and the chance at the starting job.

Cody White on IG on Dwayne Haskins. He was another player down in south Florida with Haskins these past few days. #Steelers #NFL pic.twitter.com/BB4s6Zh6ha

According to Stroud, he feels honored having the opportunity to carry on Haskins’ legacy as QB for the Ohio State Buckeyes.

“Yeah, man, it has been amazing,” Stroud said to the media prior to the College Football Playoff on a video short from YouTube. “Dwayne has done a great job in his career and a RIP to him, man and it’s actually been hard for me kind of seeing pictures of him and things like that. It is sad just to see somebody so young with the rest of his life ahead of him and just kind of lose his life like that. And I send my condolences to his family, to his wife, to his parents, to his little sister.”

Stroud dedicated his season in 2022 to Haskins after his passing, wearing his Ohio State jersey during the team’s spring game to honor his memory. Stroud went on to become a Heisman finalist, completed 66.2% of his passes for 3,340 yards and 37 TDs to only six INTs.

While Haskins may no longer be physically with us, his memory lives on for those who knew him were close to him. Having got lost in the news cycle of the season, many forgot the tragedy that struck the Haskins family and the Pittsburgh Steelers themselves as many players mourned the loss of a good friend and teammate. Plenty of Steelers dedicated their respective seasons to him and his memory as well, having the entire team rep a #3 sticker on the back of their helmets to honor their teammate. As the NFL and college football seasons draw to a close, credit those like Stroud who still keep Haskins in their memories before playing in the biggest game of his life.

The #Steelers will honor their late teammate, Dwayne Haskins, by wearing a “3” sticker on their helmets throughout the year. pic.twitter.com/zaSqAJm1hv