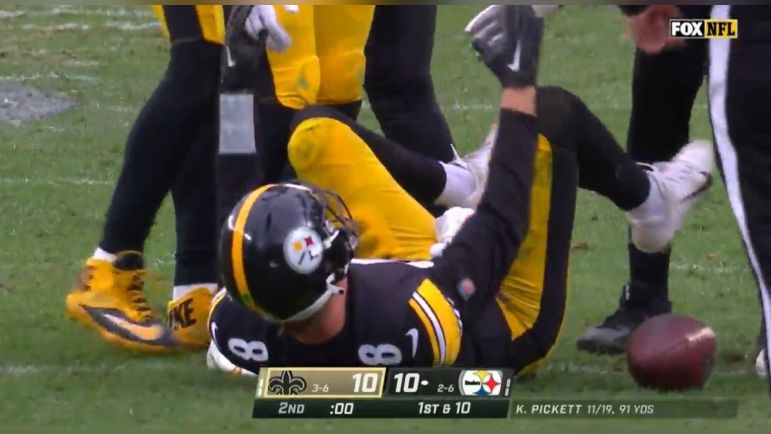 Every sack may look the same on the box score but they certainly aren’t all created equally. Sometimes the blame is on the offensive line. Sometimes it’s on the receivers. Sometimes it’s the scheme and sometimes you just have to tip your hat to the opponent. And sometimes, it falls on the quarterback.

After being sacked six times in each of the last two games, Mike Tomlin acknowledged during his Tuesday presser some of those pressures, hits, and takedowns fall on a rookie still playing like one.

“Sometimes Kenny gets Kenny in trouble,” Tomlin told reporters when asked about the high number of sacks. “But that’s just the nature of being a young guy.”

After being sacked six times in Week 8 against the Philadelphia Eagles, he was again sacked six times in Sunday’s win over the New Orleans Saints. As we noted in our Stats of the Weird, it’s the first time the Steelers have been sacked six times in consecutive games since 1989, when it happened in their first two games of the year, miserable losses to the Cleveland Browns and Cincinnati Bengals.

Putting history aside, some of those sacks fall on Pickett’s shoulders. In our Week 8 sack breakdown, we charged Pickett for one of those sacks. On the season prior to Sunday’s game Pickett had been responsible for a team-high 4.5 sacks. In fact, he and fellow QB Mitch Trubisky combined to be charged for 8.5 sacks on the year, more than the entire offensive line combined.

We’ll have to wait and go through the tape and breakdown to tally the sack blame for the Saints game. Some of it will fall on the offensive line but some could be blamed on Pickett, too. A mobile quarterback who likes to run, Pickett has had a tendency on bailing on pockets and drifting backwards, inviting the rush and making it impossible for tackles to seal the edge. Quarterback mobility is often a good thing but Pickett has also sometimes run around too much to try and make a play. The end-of-half moment against the Saints will likely be charged to Pickett, scrambling against a three man rush and running into RT Chukwuma Okorafor for the sack.

As Tomlin notes, those are the growing pains of a young quarterback. It’s also the price of a quarterback who can run. Pickett made plays with his legs in the win, including a season-long 23 yard run, and sometimes that comes at a cost, just as it did for Ben Roethlisberger and his Backyard Ben play. Live by the sword, die by the sword. For Pickett and the Steelers, it’s just one of many areas a rookie quarterback like him has to work on.